Blues have a flare for it 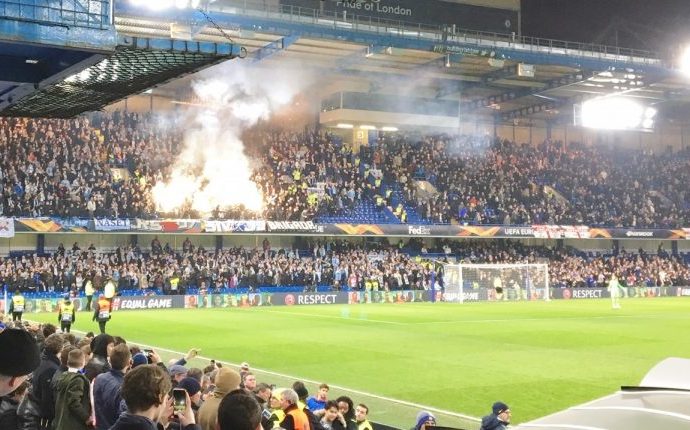 Chelsea were glad to see the back of Malmo. It's a cultural thing; their culture is to light alarming flares, filling the stadium with smoke. Heaven only knows where they hid them, but in a concerted show of defiance at the start of the second half of this curious Europa Cup Round of 32 second-leg

Chelsea were glad to see the back of Malmo. It’s a cultural thing; their culture is to light alarming flares, filling the stadium with smoke.

Heaven only knows where they hid them, but in a concerted show of defiance at the start of the second half of this curious Europa Cup Round of 32 second-leg tie, the Shed end erupted with burning flares and thick clouds, which seemed to engulf SW6.

This in a stadium where even the thought of someone producing an e-cigarette (except the manager, of course) would prompt the services to put the matchday evacuation masterplan into action.

The Blues led 2-1 from the Swedish leg of this encounter, but it remained 0-0 at half-time at the Bridge after a dire and dreary 45 minutes of football in which three players were booked for late tackles and nothing actually happened.

The flares at the start of the second half woke everyone up. Fifty police officers were deployed to keep order in the Shed upper, and attempt to start the process of discovering how, when security had been tight and even ‘flare honesty disposal bins’ had been deployed, the fireworks had been smuggled in.

Sniffer dogs, electronic searching, scanning, manual searching, bag-opening… all was for nought as the stadium lit up alarmingly.

Then some idiot ran on to the pitch. It was back to the 70s.

Three minutes later, Chelsea broke with N’Golo Kante – back in his familiar link-up role with Jorginho relegated to the bench – leading the charge. In the 55th minute he ran the length of the pitch, fed Willian who squared to Olivier Giroud and there was nothing the Malmo keeper Johan Dahlin could do to keep the ball out.

Malmo tired, and made a couple of substitutions. Immediately, Rasmus Bengtsson was sent off for a second yellow card after a foul on the edge of his area. Ross Barkley stepped up to take the free kick, and lifted it over the wall and in. It was 2-0 on the night, 4-1 on aggregate.

There was still time for Callum Hudson-Odoi to add a third. In the rare position of starting a game, he had illuminated proceedings just as much as the flares had done at the Shed end… producing the kind of flicks, jinks and lay-offs that prompted choruses of ‘We want you to stay’.

With six minutes remaining, it was he who latched on to Willian’s excellent crossfield diagonal ball before firing home a right-foot beauty.

It’s the Blues who are in the draw for the next round, with Arsenal the possible opponents.