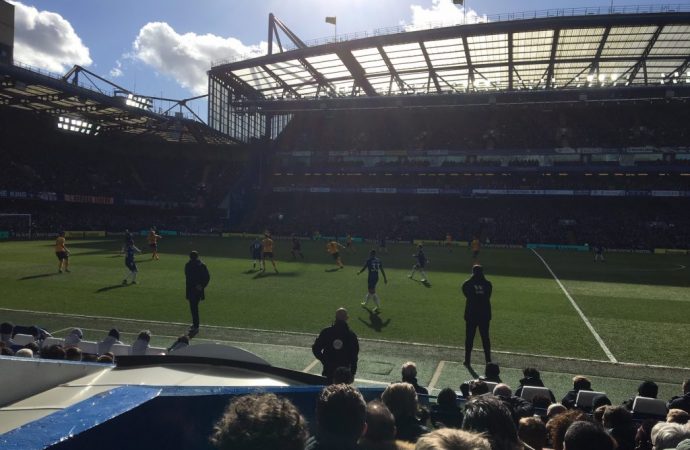 Wolves were always going to make it tough for Chelsea… certainly tougher than the pussycats of Dynamo Kiev. And so it proved. As low winter sun combined with ferocious gusts of wind at the Bridge on Sunday afternoon, it seemed as if the Midlanders were going to snaffle all three points, having absorbed all of

Wolves were always going to make it tough for Chelsea… certainly tougher than the pussycats of Dynamo Kiev. And so it proved. As low winter sun combined with ferocious gusts of wind at the Bridge on Sunday afternoon, it seemed as if the Midlanders were going to snaffle all three points, having absorbed all of the Blues’ attacks and responded with one rapid and profitable break which led to their surprise goal.

The action all came in the second half. The first might as well have been cancelled.

So soporifically one-sided was it – Chelsea’s metronome passing lulled everyone to sleep – that the 80/20 possession stats in the Blues’ favour seemed to have been generous to Wolves.

Then came the second half. As Chelsea flung more resources forward to try to break up the Wolverhampton defensive lines, they were caught on the break. Raul Jimenez struck the ball with the outside of his boot as he was pressured by the backtracking Blues defenders, and the ball sailed up and over Kepa into the net.

Stamford Bridge was shellshocked. This 56th minute aberration was not only completely against the run of play (the entire first half was played in Wolves’ half), but the visitors hadn’t – until that solitary moment – shown the remotest interest in working for anything but a suffocating 0-0 draw.

Galvanised, Chelsea began a frantic half hour of attack, with corner after corner and free kick after free kick. But to no avail. Substitutions failed to produce the breakthrough… and disgruntled fans felt like they were watching a slow car crash.

Finally, in the second of four minutes of stoppage time, Eden Hazard collected the ball from Willian on the edge of the Wolves area, and rifled an unstoppable shot past Rui Patricio to make it a hard-earned 1-1 draw.

The mood at the final whistle was complicated; the Wolves fans were pleased, but not ecstatic having seen three points reduced to one in the dying seconds, while the Chelsea fans were relieved, but not delighted, having witnessed a return to the worst elements of sideways Sarriball.

Frustratingly, Chelsea could have finished the afternoon in the top four, but ended in sixth. Morrie Sarri complained of a lack of movement, but conceded that Wolves’ defensive display was effective. “They defended in the last 20 metres with 11 players. We needed to move the ball faster, more movement without the ball, more movement into space, behind the line, and we played with five touches, so if there are no spaces it’s very difficult to score with five or six touches against a very physical team with 11 players in the last 20 metres. We need to improve in this kind of situation,” he said.

Hazard was the saviour, but should have moved more, he added. “When you have only 10 matches, every match you’re not able to win is a missed opportunity. Today was a great opportunity but we were not able to gain three points. In the last six matches, we won four and drew the other two, so there is a little consistency in this moment. We have to think only to the next match. We need to recover two points immediately.”

That opportunity comes on Sunday at Everton, after the outing to Kiev for the second leg of the Europa Cup Last 16 match against Dynamo.