Oh no… it’s you again 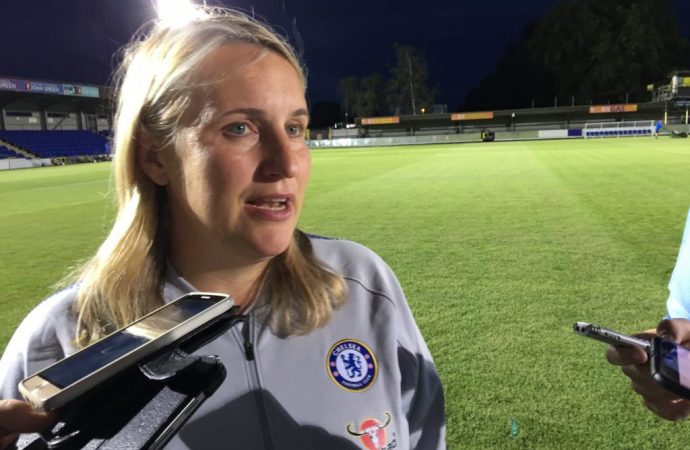 Officially, she'll take on anyone in the Women's FA Cup semis, but unofficially Emma Hayes is a teeny bit disappointed that the live Breakfast TV draw for the last four of the prestigious competition has paired Chelsea with Manchester City... again. Worse. It's up at their place - the swanky, but draughty, baby stadium next

Officially, she’ll take on anyone in the Women’s FA Cup semis, but unofficially Emma Hayes is a teeny bit disappointed that the live Breakfast TV draw for the last four of the prestigious competition has paired Chelsea with Manchester City… again.

Worse. It’s up at their place – the swanky, but draughty, baby stadium next to the Etihad, on Sunday April 14. Time to be confirmed, but it’s also the day that Chelsea men travel to play Liverpool at Anfield at 4.30pm in what is guaranteed to be one of the season’s last remaining crunchers.

The revelation that Chelsea cannot now meet Man City in the Wembley final, and that one or other of the well-supported sides will fail to reach the glittering season’s finale match on Saturday May 4. City are still on for a potential treble.

Chelsea won the self-same semi last season, before going on to defeat Arsenal in the final. This time, should the Blues be successful at the Academy Stadium, they will face either West Ham or Reading in the final.

In front of a record 1,629-strong crowd at Ferens Park on Sunday lunchtime, Ji So-Yun’s single goal was enough to defeat brave Durham.

High and gusty winds characterised the match, played on artificial grass, which limited skill and introduced a measure of luck and uncertainty to the game. “It was so windy, but we won, we got the job done and now we are into the semis,” said Ji, whose post-match thoughts immediately turned to the visit of PSG to Kingsmeadow on Thursday evening.

“That’s going to be another tough game, but that’s what we love,” she said. “We’re always ready for this and we’re looking forward to it.”

The turning point in the quarter-final at Durham came just before the half-hour mark, with the Blues’ first shot on target. Erin Cuthbert sent a ball into the box, where Ji was on stand-by, firing past Durham keeper Hannah Reid.

And 0-1 it remained, with the only surprise being defender Millie Bright starting just behind the front three, alongside Ji… back in a position she’d last occupied as a youth. Up in front were Fran Kirby, Beth England and Cuthbert.