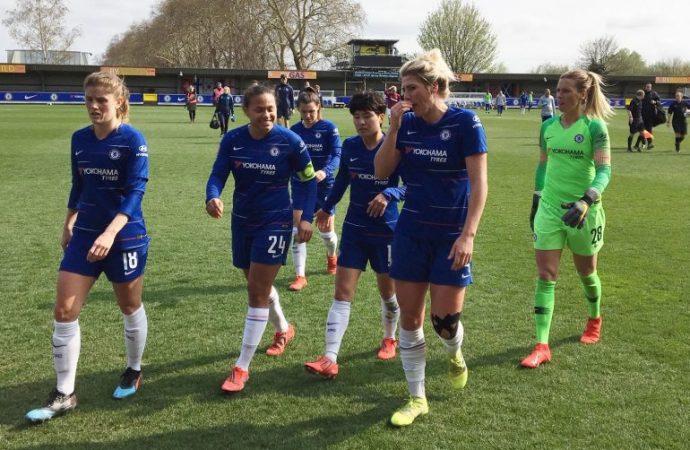 It proved a frustrating afternoon for Chelsea Women as they faced London rivals West Ham at Kingsmeadow on the last day of March. Despite attack after attack the Blues were unable to break the Hammers’ defence in the second half, and had to settle for a 1-1 draw. Manager Emma Hayes said afterwards that the

It proved a frustrating afternoon for Chelsea Women as they faced London rivals West Ham at Kingsmeadow on the last day of March. Despite attack after attack the Blues were unable to break the Hammers’ defence in the second half, and had to settle for a 1-1 draw.

Manager Emma Hayes said afterwards that the exertions of Wednesday night’s late Champions League victory against Paris Saint-Germain had taken their toll, and that the players were only capable of competing at 70% of their usual level as a result.

An impressive crowd of 2,854 gathered to watch the game, which began brightly with the Blues attacking the Irons’ goal relentlessly. “We created enough chances,” said Hayes. “In the first few minutes we should have been two or three up.”

Both Beth England and Drew Spence (captain for the day to mark her 10th anniversary as a Chelsea player) came close, before England struck the post in the 27th minute, while Maren Mjelde – the late goal heroine in Paris in midweek – floated a ball on to the roof of Anna Moorhouse’s net.

A succession of Chelsea corners – all taken by Erin Cuthbert – eventually built up the pressure before half-time that led to Chelsea’s goal as England’s diving header beat Moorhouse from a free kick in the 42nd minute. Cue a wave of ‘England for England’ chants from the main stand.

Hammers manager Matt Beard – who used to be the Chelsea gaffer – switched things around at half-time with a double substitution which saw ex-Blue Claire Rafferty come on in place of Erin Simon, and Kate Longhurst replace Lucienne Reichardt.

That passed some of the impetus to the Irons, although Chelsea’s urgent attacking continued. England came close to doubling her goal on a couple of occasions, while in defence Jess Carter had one of her most impressive days in a blue shirt.

But in the 65th minute, the Blues’ guard dropped. Leanne Kiernan crossed, and former Blue and West Ham captain Gilly Flaherty popped up at the far post to nod down and beat her old team-mate Carly Telford.

As Chelsea tired, Hayes brought on Hannah Blundell and Karen Carney to increase the creative options… but West Ham held on and put their stamina to good advantage as they earned a point against the champions.

“The fatigue, emotionally and physically, was there after Wednesday night,” said Hayes. “That [performance] was at 70% today; we were dominating and creating chances, but just not converting enough of them. We were disappointing after what has been an unbelievable week, but the league campaign hasn’t been our priority for quite a while now.”

Chelsea’s No10, Ji So-Yun, waits for a pass from Drew Spence with former Blue Claire Rafferty, West Ham’s No11, right