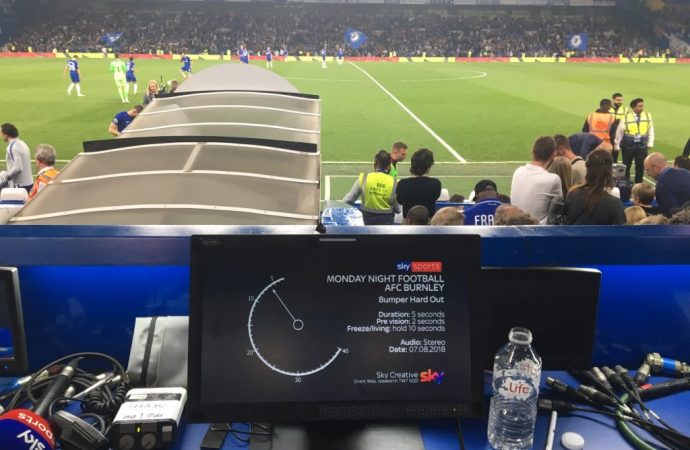 It’s getting difficult to tell who is the most frustrated at an unsettled and restless Stamford Bridge… the manager (sent to the stands for venting his frustration at Easter Monday’s draw against Burnley) or the fans. Strolling back towards Putney across Eel Brook Common after this chaotic – but eminently watchable – 2-2 draw, the

It’s getting difficult to tell who is the most frustrated at an unsettled and restless Stamford Bridge… the manager (sent to the stands for venting his frustration at Easter Monday’s draw against Burnley) or the fans.

Strolling back towards Putney across Eel Brook Common after this chaotic – but eminently watchable – 2-2 draw, the anger of fans towards the Moon, the trees, the players, but mostly the manager, was visceral.

Chelsea managers are destined to endure this mood swing at some stage in their career, but there doesn’t look to be a way back for Sarri, and you suspect he knows it.

Yes, the man’s exasperated with Burnley time-wasting – but it’s his ‘Sarriball’ tactics of endlessly stroking the ball from one side of the pitch to the other like a footballing metronome that is at the root of the Blues’ current inability to close out matches with ease.

The philosophy appears to be: go from side to side until the opposition is exhausted, then give the ball to Eden Hazard to attack. Well, that’s no way to run a campaign.

Other top-six sides such as Man City, Liverpool and Spurs have been known to vary their approach, and seem to be all the more entertaining to watch as a result.

Easter Monday’s draw began well – one of those crazily open games in which nobody felt like defending and everyone was given free rein to attack at will.

But it descended into the equivalent of First World War trench stalemate, with every attempt by Chelsea to score a winner snuffed out by inactivity, deliberate time-wasting, play-acting, cramp seizures and the extremely effective winding-up of the oh-so-easily wound up Sarri.

I’d add ‘in the dugout’, but the fact is Sarri brought his eventual dismissal in the fourth minute of second-half stoppage time on himself; letting his annoyance at Sean Dyche’s perfectly legitimate (if maddening) tactics get to him as he prowled the side of the pitch on just about every part of Stamford Bridge APART from the technical area to which he is meant to be confined.

Sarri spends most of each match either camped in the opposition technical area (which led to some well-targeted and merited abuse from the coaching team who felt it was cheeky), on the touchline (getting in the way of players attempting to take throw-ins) or wandering off down the side, almost level with the goal area.

Until a fourth official – Roger East had the unenviable task on Monday night – reports him early in the game, and gets him sent to the stands in the third or fourth minute, nothing will change.

Other managers see him getting away with it, and think they can get away with things too as the refereeing team seem to want anything for a quiet life. An early crackdown, and there would be no more wandering, no more confrontations with rival managers and coaches, and no problem.

Chelsea began this match at the gallop; Ben Mee forced to hook the ball off his goal line in the sixth minute as the Blues attacked. So it was a surprise when, two minutes later, Jeff Hendrick gave the Clarets the lead, from a corner.

The Blues’ ability to defend set-pieces is woeful, but it was still a reviving moment four minutes later when N’Golo Kante levelled, after Hazard’s wizardry down the left wing (leaving Matthew Lowton on his Arsenal) had teed up the chance of a rocket.

Two minutes later the comeback was complete, with Gonzalo Higuain showing the ability the faithful have only had glimpses off, rattling a shot in off the underside of the bar after a quick backheel from captain Cesar Azpilicueta set him on his way.

After the Man City v Spurs Champions League game, it now seems obligatory to start the first 20 minutes of every match with four goals. So it proved this time too.

With the crowd still trying to make sense of the first three, a fourth arrived. To be fair it was a little late – the 24th minute. Another set-play. Another Chelsea wobble. A free kick sailed over everyone, fell to Ashley Barnes and he wellyed it up into the roof of the net beyond Kepa.

And that was that. For the subsequent 66 minutes there was nothing but time-wasting, suspect injuries, bookings, substitutions and sheer, unbridled frustration.

Burnley slowed things down wherever they could, fans and management and players responded angrily, but what could ref Kevin Friend do, except dish out the odd booking. It’s perfectly within the rules to take your time – even the top sides do it when seeing a match to a conclusion. And Burnley were more than happy to settle for the point.

Goalie Tom Heaton, the Burnley captain, had been earning boos from the stand as early as the first five minutes as he set the tone for what was to follow. He was booked for taking his time (just as Kepa had been booked in the last home game, incidentally) in the 33rd minute. Others entering the ref’s book during this frustrating match included Pedro and Mateo Kovacic.

When Higuain was subbed in the 77th minute for Olivier Giroud, his own frustration boiled over. He unleashed a rant at assistant manager Gianfranco Zola, and sat down on the benches in disgust. To be fair to him, he’d done as well as he’s done in any Chelsea game.

At the end, as the minutes ticked away and Chelsea went back and forwards rather than trying a direct run at defenders, the tempers flared. Sarri was involved in a confrontation with the Burnley underlings and was shown the door. All in all, a frustrating night as the Blues failed to capitalise on defeats for Man U and Arsenal to make a firm bid for the Champions League places in the table.

One point is just not good enough against Burnley, and everyone knows it.