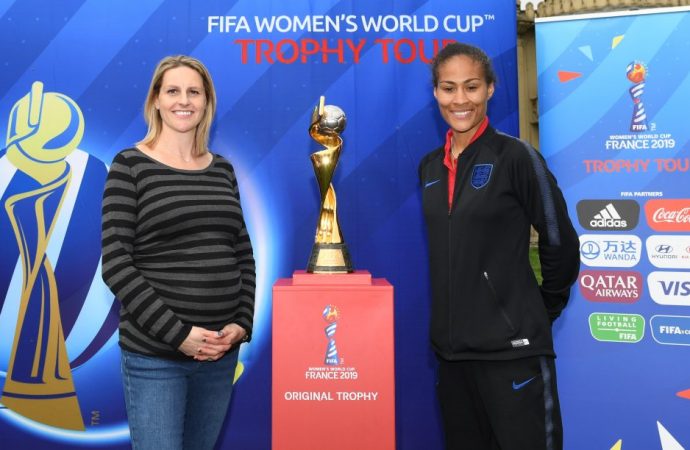 England legends Kelly Smith and Rachel Yankey were on hand to welcome the FIFA Women’s World Cup trophy to the UK, writes Jane Grove. The most coveted prize in women’s football is travelling across the globe visiting all 24 countries that will compete in the final tournament, which runs in France from June 7 to

The most coveted prize in women’s football is travelling across the globe visiting all 24 countries that will compete in the final tournament, which runs in France from June 7 to July 7, and will feature Chelsea’s Millie Bright, Erin Cuthbert, Ji So-Yun, Karen Carney, Maria Thorisdottir, Maren Mjelde, Hedvig Lindahl, Jonna Andersson and Magda Eriksson.

It set off from Paris on February 24 with a stop, pictured above, at Brighton’s historic Royal Pavilion on Tuesday April 23.

Coinciding with St. George’s Day, Brighton was chosen to welcome the trophy as the city will play host to the Lionesses’ World Cup send-off match against New Zealand on Saturday June 1.

Tickets are £1 for children, £10 for adults. Visit TheFA.com/LionessesTickets.

England head coach Phil Neville said: “Excitement for the World Cup is definitely growing, the closer we get to the finals and I can’t wait to bring the squad to Brighton for our send-off game before we head to France.

“We know we will get brilliant support from fans, and my players will be determined to put on a great show in our farewell match. Thank you in advance to everyone who has bought tickets to see us play.”

Children from the local Balfour Primary School who are part of the Brighton and Hove Girls’ Football School Partnership were invited to take part in the event, having photographs with the trophy before taking part in a special SSE Wildcats coaching session.

SSE Wildcats is The FA’s participation initiative, created to provide girls aged 5-11 with the opportunity to give football a try, welcoming over 20,000 participants across the country. 1,400 centres will be open across England this summer.