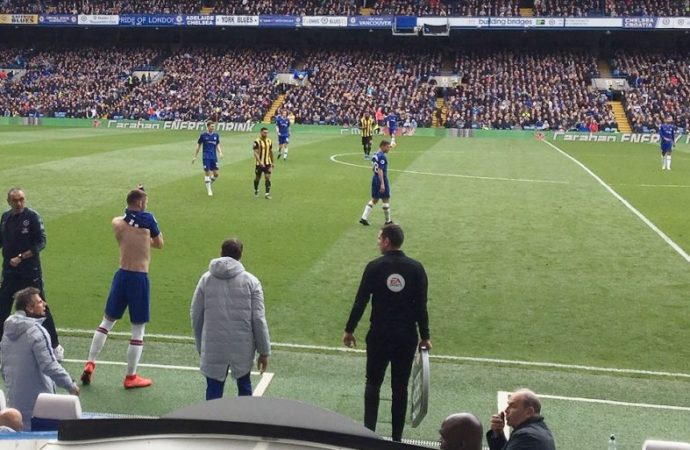 As stalwart defender Gary Cahill pulls his shirt on to enter the field of play as a sub in the dying moments of the last home game of the season – a rare and utterly un-Sarrilike gesture from a manager not given to sentiment whatsoever – it’s a strange moment for Chelsea’s No24, wearing the

As stalwart defender Gary Cahill pulls his shirt on to enter the field of play as a sub in the dying moments of the last home game of the season – a rare and utterly un-Sarrilike gesture from a manager not given to sentiment whatsoever – it’s a strange moment for Chelsea’s No24, wearing the new-style shirt for both the first and final time.

This was always going to be a difficult game for the Blues; the Hornets are not in the FA Cup final for nothing, and the chants of their fans were almost all Wembley-themed.

But after a gruelling first half in which neither side was able to score, the goals suddenly flooded in as Watford’s concentration lapsed… perhaps with the trip to face Man City under the arch on May 18 seeping into their minds.

N’Golo Kante went off injured in the ninth minute (giving Ruben Loftus-Cheek a decent run) after Javi Gracia and Morrie Sarri had shared a warm embrace before the game, a genuinely friendly gesture mirrored by a hug between Watford substitute keeper Heurelho Gomes and Willian.

The turning point came early – in the eighth minute. Diving, seemingly forlornly, to his right to try to prevent a superb Troy Deeney header flying into the top corner of his goal, Kepa somehow managed to twist in flight to bat the ball away with his less natural hand, adding a crucial couple of centimetres to his reach and pulling off one of the saves of the season.

That goal would have rewarded Watford for their early efforts (Man City better not be complacent against this inventive, resourceful, well-managed and original outfit at Wembley), but the rest of the first half saw the teams’ constant attacks cancelling each other out.

But if Chelsea seemed out of ideas in the first half, everything changed dramatically after the break. Three minutes after the restart Hazard took a corner (the Blues’ first of the game), exchanged a quick short pass with Pedro, then sent a beautiful cross into the box, where Loftus-Cheek rose majestically and headed down and in, past the despairing Ben Foster.

Three minutes later, the same again. This time Hazard floated the corner kick into the box, and David Luiz headed in, in identical style.

Watford were shellshocked. In the 75th minute, a rare thing – a goal for the often goal-shy No9 Gonzalo Higuain. He took it well; Pedro poked a through ball into the Watford box, and he latched on to it, turned and lofted it over Foster.

Cahill’s cameo at the end earned him a standing ovation for his club service as he replaced David Luiz with moments to go. In any other set-up, Cahill would be a regular. But for some reason Sarri took against him at the start, and opted to use anyone but the No24 in central defence.

His brief appearance showed he’s still fit, fast, tall and useful – he’ll be an asset to any other team. How about one managed by, say, Frank Lampard or John Terry?