Carly, Millie, Kaz & Fran are in 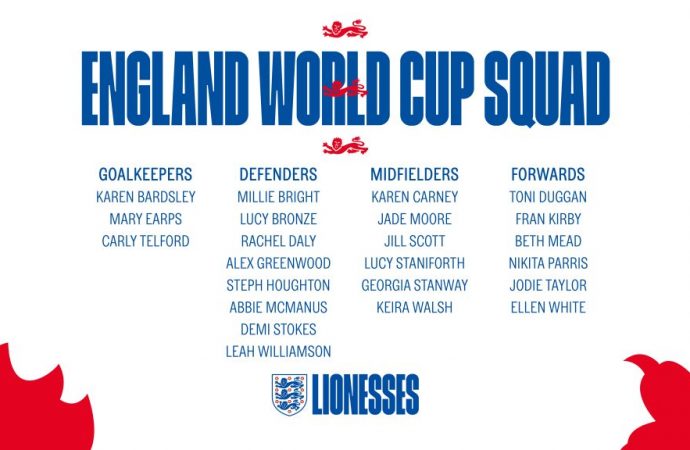 Four Chelsea players are in the England squad to play in the FIFA Women’s World Cup in France next month… but there’s no room for in-form Beth England, despite her prolific recent scoring record, writes Jane Grove. Phil Neville has unveiled the 23 Lionesses, and they include keeper Carly Telford, defender Millie Bright, midfielder Karen

Four Chelsea players are in the England squad to play in the FIFA Women’s World Cup in France next month… but there’s no room for in-form Beth England, despite her prolific recent scoring record, writes Jane Grove.

Chelsea Women’s manager Emma Hayes still believes that Beth England – at the top of her game, four weeks shy of her 25th birthday – could feature as a forward for the national side, and it is understood that Beth’s name is on Neville’s reserve list, should anything untoward happen to his announced band of forwards.

Neville has been to Kingsmeadow several times during the season, and has had discussions with Hayes about her team, to ensure the Lionesses have the best possible chance of glory in France.

Hayes and Neville struck an informal deal on limiting the appearances Millie Bright and Fran Kirby made in their matches for Chelsea in 2019, to maintain fitness while not aggravating injuries or taking any needless risks.

But although Neville is an admirer of Beth England – particularly her workrate and wholehearted commitment – and although she has represented her country at U19 and U23 levels, she was squeezed out by the form of the likes of Beth Mead, Nikita Parris and Toni Duggan.

“This is a significant moment in our World Cup campaign and I want to congratulate all of the players in our squad,” said Neville, as the Lionesses’ names were drip-fed out to maximise publicity. “I must also thank those who just missed out for all of their efforts. We would not be in this position without them, they have played a big part in our World Cup journey and I know they will be our biggest supporters this summer.

“Picking a squad is never easy but I believe in this group and I know they will be ready to help us perform at our very best at the finals. We know what we are capable of achieving and are determined to do all we can to be successful. We keep saying it but the hard work starts now and we are going to give it everything we have to make the nation proud.”

Prince William got the ball rolling today, with a recorded announcement that Steph Houghton would captain the Lionesses – hardly earth-shattering news, but nevertheless a pronouncement guaranteed to make headlines on a day a Royal baby’s name was also being revealed.

Meanwhile, Karen Carney and Jill Scott will be making their fourth World Cup appearances after representing England in China in 2007, Germany in 2011, and Canada in 2015.

England have been drawn against Scotland, Argentina and Japan, starting with a match against the Scots – including Chelsea’s Erin Cuthbert – in Nice on June 9 before taking on Argentina in Le Havre on June 14, returning to Nice to face Japan on June 19.

If you happen to be taking a continental break and fancy cheering on the Lionesses in France, visit TheFA.com/JoinLSC