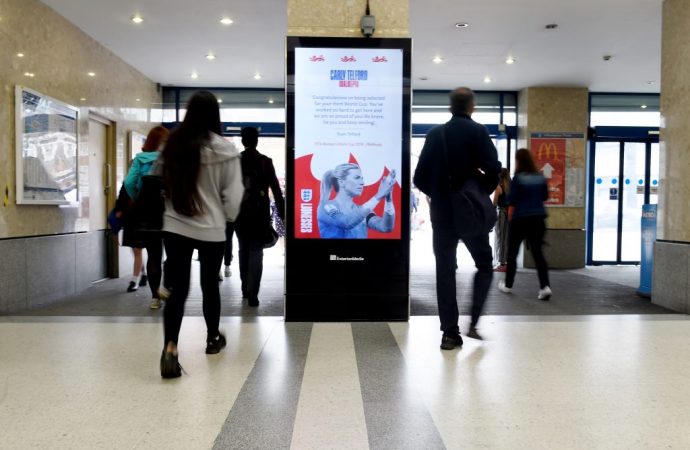 She’s one of the Lioness poster girls as England’s women’s team head to France at the start of the World Cup… Carly Telford now greets commuters using Kingston station, just down the road from the Blues’ home ground of Kingsmeadow. The poster carries a message from Carly’s family which reads: “Congratulations on being selected for

She’s one of the Lioness poster girls as England’s women’s team head to France at the start of the World Cup… Carly Telford now greets commuters using Kingston station, just down the road from the Blues’ home ground of Kingsmeadow.

The poster carries a message from Carly’s family which reads: “Congratulations on being selected for your third World Cup. You’ve worked so hard to get here, and we are so proud of you. Be brave, be you and keep smiling!”

Billboard and poster messages for each member of the Lionesses squad have been popping up this week in their home towns, or team towns ahead of the FIFA Women’s World Cup, each carrying an individual message of support.

There’s one for everyone in the 23-player squad, with an image of the Lioness accompanied by a supportive message from an inspiration in their early career, such as a friend, family member, teacher or coach.

The billboards have appeared across the country in locations that are special to each player and their journey, from where they grew up to the location of their current club. Karen Carney, the Chelsea captain and a key member of the squad, lives in Surbiton… but her poster appears in Holloway Circus, Birmingham, where she grew up.

Chelsea defender Millie Bright’s poetic message is lovingly written by her grandad Arthur and can be seen on her billboard in Fulham Broadway, a stone’s throw from Stamford Bridge: “The training is over, the practice is done, now to get the series won. Believe in your team mates and be on the up, then come home with the World Cup.”

Fran Kirby’s poster is in Reading – her first team.

England’s captain Steph Houghton’s billboard can be seen on Albion Way in Salford, not far from her club, Manchester City. Steph Houghton’s cousin Amy shared a touching message of support for the captain, which featured on her billboard: “From our local park – the Welfare – to the World Cup, you’ve done us proud. You are the most inspiring and resilient person and we love you so much. Good luck!”

Toni Duggan’s billboard takes centre stage just outside Liverpool Lime Street station, in her home town. Toni Duggan’s message, written by her mum, reads: “Proud is an understatement! From a little girl in Everton to a name known worldwide, you are an inspiration! Everyone in Liverpool is willing you and the Lionesses to do well.”

Sunderland local Jill Scott is one of England’s most capped players. Jill’s billboard can be found close to the Stadium of Light in her home town. Jill’s message is written by former coach, Paul Smith, “You were a dream to coach, always listened and willing to learn. Good luck, everyone at Bolden C.A. Girls Football Club will be watching.”

Phil Neville, Lionesses manager, said: “This is a great send-off for the team ahead of the World Cup and encapsulates the phenomenal support that they have received so far. The girls know that the country is fully behind them and can’t wait to get out there and give it everything.”

The FIFA Women’s World Cup runs from June 7 to July 7 with the Lionesses playing their first game on June 9 against Scotland in Nice, kick off 5pm. All fixtures will be broadcast live on the BBC.