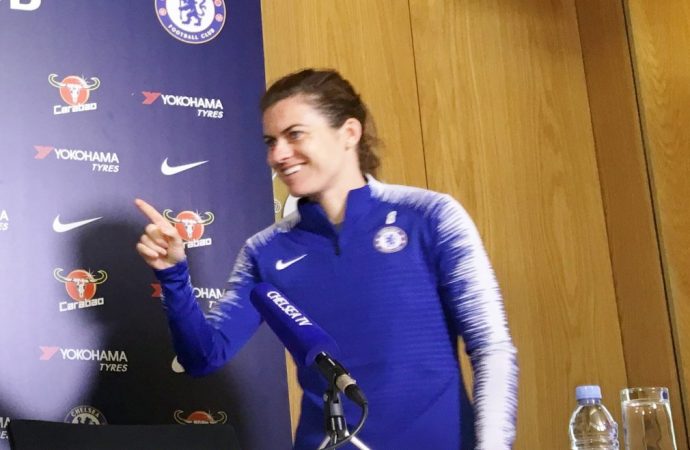 Chelsea captain and Lioness Kaz Carney has decided to retire from football… at the top of her game, and with the spotlight still on her at the FIFA Women’s World Cup. The midfielder from Surbiton will sign off after the Lionesses conclude their campaign against Sweden in Nice on Saturday. England manager Phil Neville is

Chelsea captain and Lioness Kaz Carney has decided to retire from football… at the top of her game, and with the spotlight still on her at the FIFA Women’s World Cup.

The midfielder from Surbiton will sign off after the Lionesses conclude their campaign against Sweden in Nice on Saturday. England manager Phil Neville is planning to ensure she gets some game time in the last match before the team fly home.

On the eve of the third-place play-off, Carney said she believed the time was right to seek new challenges… with the possibility of a future career in management looming.

She is seen as something of a strategist and thinker in the Chelsea squad, regularly liaising with Blues manager Emma Hayes to pass on tips and hints to younger players in the dressing room, where everyone sees her as a wise owl.

“I’m incredibly proud to have achieved so much in the game but now is definitely the right time to retire,” said the Solihull-born player who turns 32 next month. “To have played for England was my ultimate ambition and to do so at four World Cups and represent Team GB at a home Olympics was beyond my wildest dreams when I was starting out.”

An England centurion, she won her 100th cap against Germany at Wembley in November 2014 and her service for club and country will be commemorated at a forthcoming international.

Carney will go down in history as one of England’s all-time greats, an accolade underlined by being made an MBE in January 2017. She won a bronze medal at the 2015 World Cup in Canada and helped Neville’s squad win the SheBelieves Cup in the United States earlier this year. Overall, before the match against Sweden, she has won 143 caps and scored 32 goals – having made a goalscoring debut in a 4-1 defeat of Italy in 2005.

“I would like to thank everyone who has made this all possible from my family and friends, everyone I have played for and worked with and, of course, the England squad and staff. I owe everything I have to all of them.”

Neville said that Karen deserved all the plaudits that will come her way. “It has been a privilege to work with her over the past 18 months, but even more special has been the chance to get to know someone who is an incredible person and a special team-mate. While she will not want a fuss, Karen is someone who deserves total recognition and respect as a true legend of the game.”

The Solihull-born playmaker started at her hometown side Birmingham City, before moving on to Arsenal where she won a memorable quadruple in the 2006/07 season.

A spell in the United States with Chicago Red Stars followed before returning to Birmingham in time to score the winning penalty in the 2012 FA Women’s Cup Final shoot-out defeat of Chelsea, the team she would join in 2015. She won the player of the year award in her first full season with the Blues and was part of the 2017/18 double-winning squad – despite an injury-hit campaign.

Baroness Sue Campbell, director of women’s football at The FA, said: “Karen will be regarded as one of English football’s great names. Her humility despite all she has achieved on the world stage is one of many endearing qualities. She has played a huge part in the Lionesses’ incredible progress on the pitch and the inspirational impact the squad has had off it.

“I know Karen will be much missed by everyone at Chelsea and England – but I am certain she will stay in the game as she has so much to offer. She will always be welcome at Wembley and St. George’s Park and it is right and proper that The FA mark Karen’s wonderful career in a fitting way in the months to come. We are all so very proud of her.”