All this for just a fiver! 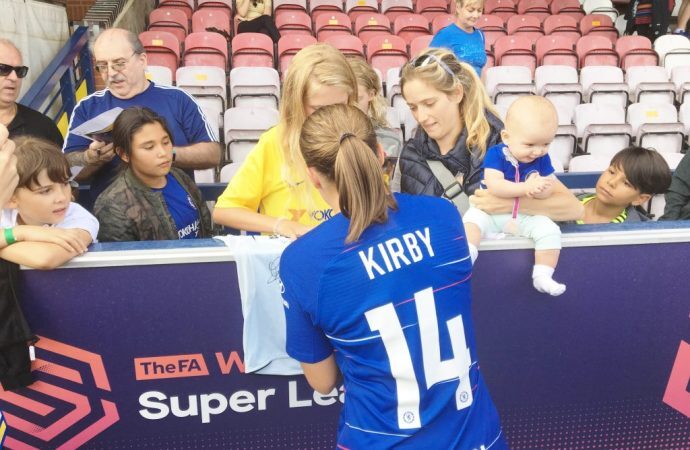 A sell-out 41,000-strong crowd will greet Chelsea Women’s league opener against Spurs on September 8 at Stamford Bridge, so no more tickets are available. But the good news is that the full season at the Blues’ real home, Kingsmeadow, is poised to start… and season tickets are available from as little as five quid. The

A sell-out 41,000-strong crowd will greet Chelsea Women’s league opener against Spurs on September 8 at Stamford Bridge, so no more tickets are available.

But the good news is that the full season at the Blues’ real home, Kingsmeadow, is poised to start… and season tickets are available from as little as five quid.

The bargain prices apply to anyone under 20 and anyone over 65, but for those in the middle, the full season ticket is still only £49.

Kingsmeadow hosts its first match in the Continental Cup game on September 22, when West Ham visit.

But it’s that eye-catching full-house fixture at Stamford Bridge on Sunday, September 8 at 12.30pm that is firing up Fran Kirby (above) and her team-mates. Goalie Carly Telford says that the thought of playing at the Bridge is “unbelievable”, while Fran says that the match represents a real opportunity for a breakthrough in the women’s game, building on the World Cup boost which the sport enjoyed this summer.

“It’s a massive opportunity,” she said. “We need to keep this interest running, not just internationally but also domestically with club games. Being on the [Stamford Bridge] pitch will be incredible; we will have to make the most of that huge opportunity.”

The game, which will be the largest-attendance women’s league match in England since 53,000 packed into Goodison Park in Everton to watch a local women’s game back in 1920, is guaranteed to be noisy. But not noisy in the sense of the men’s game (and Frank Lampard and Co have a critical match today at the Bridge against Leicester City).

When 40,000+ youngsters are doing their best to outscream each other, it’s likely to evoke distant memories of Beatlemania or early Bay City Rollers concerts!

“It will be the biggest attendance for a women’s league game in this county in 99 years,” added Fran, still rubbing her eyes in disbelief at the 12 million figure for those who tuned in to watch England v USA in the World Cup. Fran believes the Stamford Bridge matchday experience will blow the minds of the younger squad members, who will never have experienced a huge, rowdy, screaming stadium.

“We need to make sure that people want to keep coming to watch,” said Fran, while manager Emma Hayes added: “This is such a fantastic way for the team to start the new season. The atmosphere will be fantastic for all the families that come along, and it’s a real opportunity to see top-class women’s football in one of the best stadiums in the country.”

The action starts on nearby Eel Brook Common, off Kings Road, when the build-up to the game features Chelsea Foundation coaches and representatives of sponsor Vitality creating a family-friendly football festival morning. The stadium itself opens at 11am, with pre-match entertainment and Capital FM DJ Marvin Humes spinning the discs. Everyone attending will find a free gift on their seats.

After what will be a record turnout for a Barclays FA Women’s Super League game, it’s back to the bread-and-butter of Kingsmeadow. Home matches Blues fans are particularly relishing come on Sunday, Oct 13, at 2pm against Arsenal in the league, and on Wednesday, Nov 20, under the lights v Tottenham (Conti Cup).