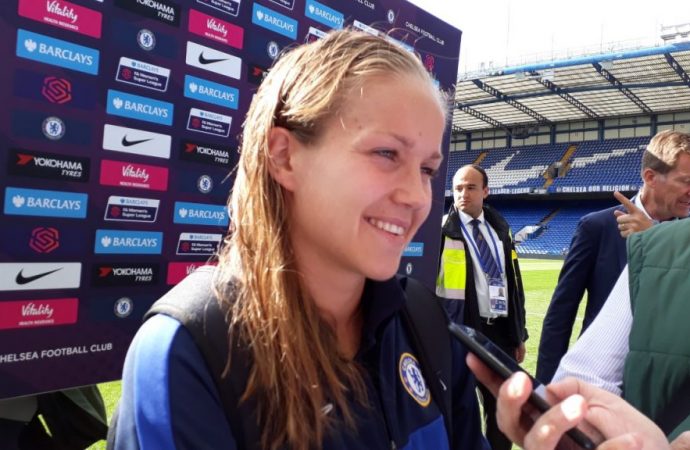 Meet Guro Reiten, Chelsea Women’s new Norwegian forward… and as nice a player as you’re ever likely to meet. She was buzzing after the Blues’ opening fixture of the 2019-20 Women’s Super League, which pulled in a mighty 24,564 to Stamford Bridge to witness a 1-0 victory over newly promoted Tottenham. And manager Emma Hayes

Meet Guro Reiten, Chelsea Women’s new Norwegian forward… and as nice a player as you’re ever likely to meet. She was buzzing after the Blues’ opening fixture of the 2019-20 Women’s Super League, which pulled in a mighty 24,564 to Stamford Bridge to witness a 1-0 victory over newly promoted Tottenham.

And manager Emma Hayes was brimming over with delight at the way the £12,000 new signing had slotted into the squad. “She’s fitted in seamlessly,” said the gaffer after Sunday’s win – a match which, in the space of four minutes, eclipsed the frustrating start to last season’s campaign.

This time round, however, cheered on by a huge crowd with an average age of, perhaps, 15, Chelsea stormed into a lead that never really looked in danger, apart from a couple of flutters.

The Blues kicked off at 12.30pm, attacking the Shed end. After dispossessing Ria Percival, striker Beth England moved into position, 25 yards out and four minutes gone, and unleashed a positive howitzer of a ball which flew into the far, top corner of the net, past the despairing clutches of one-time Chelsea keeper Becky Spencer.

Hayes joined the igloo of girls – a mound of celebrating yelps and squeals on the touchline in front of the dugouts – to celebrate.

Post-match, Hayes said that the game had “built on the momentum of the World Cup”, adding that while a bigger margin of victory might have been expected after that bright start, this was a win that announced the big-time arrival of the women’s game, and heralded the start of something very, very special.

In a nice touch at the end, a clutch of Chelsea’s winning team members saluted a group of Chelsea’s women pioneer footballers from the 1970s and 80s – guests of honour at the match, alongside the club historian Rick Glanvill.

Of Beth England’s goal, Hayes said: “She saw the pocket of space because [Tottenham] dropped so deep. She is ready – she justifiably earned her England call-up. She’s got charisma, good hold-up play and can finish with left and right foot. What a brilliant personality in the dressing room!”

Hayes attributed part of England’s upbeat outlook on the arrival of her new puppy, Buddy! She also paid tribute to Deanna Cooper, on as a sub, who has battled back after long-term cruciate ligament injury to make a positive contribution in the second half, and Adelina Engman, starting up front alongside Reiten, who works hard in training, week in week out, but rarely receives the praise she deserves as Fran Kirby (out injured) and Erin Cuthbert (a second-half sub) steal the headlines.

“Collectively, as a group, we’ve got everybody pulling in the same direction,” said Hayes.

With Magda Eriksson taking over the captain’s armband from the retired Kaz Carney, on her 26th birthday, the blistering start after four minutes – that left-foot cracker from England – seemed to represent a giant setback for a Spurs side, cheered on by a group of noisy away supporters, who have just arrived from the Championship.

Chelsea had the lion’s share of the first half, but the second half (understandably this early in the season) rather faded away at times.

Reiten had a shot parried by Spencer just before the break, but on 50 minutes Rachel Furness made Blues keeper Ann-Katrin Berger earn her keep, forcing a dramatic dive and fingertip save to deny Tottenham an equaliser.

That was the closest Spurs came… but Chelsea so nearly went two-up on the hour mark as Drew Spence struck the crossbar, and Reiten, reacting quickly, sent a follow-up header crashing against the post. Two woodwork strikes in two seconds.