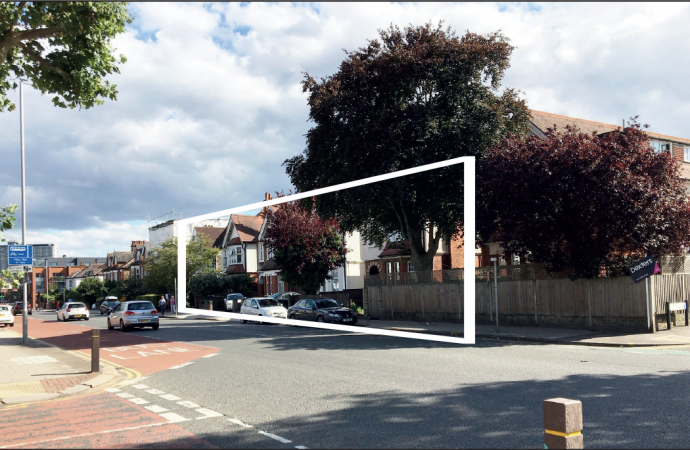 In the late 19th century there was a heated dispute over what should become of Tolworth Pond. There’s no sign of it today; the row led to it being filled in. But you can see it on the 1866 map. Ewell Road crosses the map diagonally, from the junction with Ditton Road in the west

In the late 19th century there was a heated dispute over what should become of Tolworth Pond. There’s no sign of it today; the row led to it being filled in. But you can see it on the 1866 map.
Ewell Road crosses the map diagonally, from the junction with Ditton Road in the west to Red Lion Lane running southwards, at the eastern corner.
Woodside and Woodside Villas remain, either side of Douglas Road. The naturalist writer Richard Jefferies lived in one of the Woodside buildings, now Stack and Bonner, which sports a blue plaque in his honour.  King Charles Road runs southwards at the top right of the map, petering out before reaching Ewell Road. The pond is an irregular shape, measuring 50 yards at its widest point.
More than two centuries before the map was published, a description of the pond in a legal document of May 1665 recorded that Leonard Hammond of Teddington had taken possession (for the payment of one shilling) of ‘that acre of ground lately made a pond for the breeding and keeping of fishe lying and being in the waste, commonly called Surbiton Common within the parish and manor of Kingston aforesaid, and parcel of the said waste there between a highway leading from Kingston towards Ewell in the east, Talworth Common to the south, a parcel of Common called The Glades on the west and a round hill parcel of the said Surbiton Common on the north’.
The document said that Leonard Hammond and his heirs were to ‘keep the fishe pond and replenish and stock with such kinds of fishe as they shall please’. They were entitled to fish all they want, and to ‘plant willows and other young trees in or near the pond and they could also cut these down and lop as necessary’. They were to allow people with cattle on Surbiton Common to let the cows drink at the pond.
The rent was five shillings (25p) a year at the feast of St Michael the Archangel and the Annunciation of the Blessed Virgin Mary. If not paid promptly, a tuppence-a-day fee was payable after 21 days.
A second pond, Chamberley Pond, near the junction of  Ditton Road and Hook Road, was also to be administered by Mr Hammond. This must have been filled in before 1866 as there’s no sign of it on the map, though it is shown on an earlier tithe map.
In 1866, the area was largely rural. But by the end of the century Ewell Road had become built up on both sides, with side roads extending into the fields and woodland beyond. The pond had become an embarrassment. It was generally agreed that it was no longer fulfilling its original purpose, but it was in an area of potentially valuable building land. A five-verse poem was penned by J Rayner in 1898, with the lament:

It seems the pond let off an unpleasant miasma, had outlived its original use and was doomed.
A report in the Surrey Comet of May 27 1893 refers to Mr Charles Schwind attempting to fence it off, presumably along the roadside as the dispute was with Kingston’s Highway Board. The board had removed the fencing, stating that the public should be able to use the pond as a public watering place.
By 1901 it was in possession of Steven Kavanagh, who was offering rather less in compensation than seemed fair. The Comet report referred back to 1820, when the Enclosure Act took place, allowing for the watering of cattle at the pond.
However, Steven Kavanagh had purchased the pond from the Lord of the Manor, and so had certain rights. It had to be agreed with the inhabitants of Talworth and the Charity Commissioners that a piece of land of a similar size could be exchanged if the pond was filled in. In addition a drinking fountain and cattle trough should be supplied.
There were mutterings and letters to the Surrey Comet from an angry ratepayer, saying that this was an unfair exchange. However, it went ahead, and the fountain was placed in position at the junction of Ewell Road and Ditton Road, near where the police station then stood. It was at a time when drinking fountains were regularly being provided for the public.
The animal trough remains on the triangle at the junction of Ellerton Road and Ditton Road. Eventually, however, the fountain was deemed to be a traffic hazard and was removed and unceremoniously dumped in another pond, the Bluey, at Tolworth brick works. Maybe rancour was still felt against Steven Kavanagh…
Kavanagh was born in Ireland in 1847, and died in Kingston in 1921. He was the borough’s water engineer and a JP. He had been head of Surbiton borough council, and was said to have discharged his duties wholeheartedly, putting personal considerations to one side.
At one time an engine driver at Tolworth’s brickworks, he was involved in building projects, particularly cemeteries, and lived in Pembury Lodge, Ewell Road. Later his son Herbert lived at 322 Ewell Road, presumably continuing Steven Kavanagh’s building company long after his father’s death.
The site of the pond is close to the present-day junction with Egmont Road. The Earl of Egmont owned much of the land in Tolworth. He gave the land on which St Matthew’s school stood, as indicated by a rather worn plaque on the Ewell Road wall.
There is also a plaque on the wall at the southern end of Egmont Road bearing Steven Kavanagh’s name, for anyone who wants to explore.
The Kavanagh family remained in Surbiton. Miss Nora Kavanagh, Steven’s granddaughter, taught me history at Rosebery Grammar School in Epsom, but it was constitutional history, rather than the local history which has now become my passion. 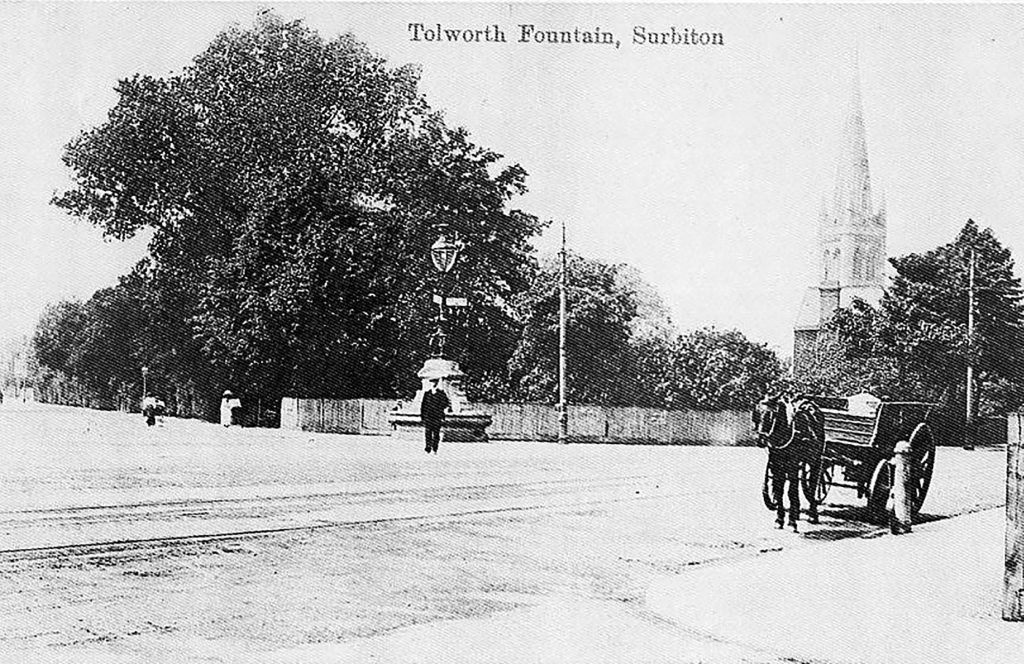 Tolworth fountain, with the ghostly spire of St Matthew’s looming behind 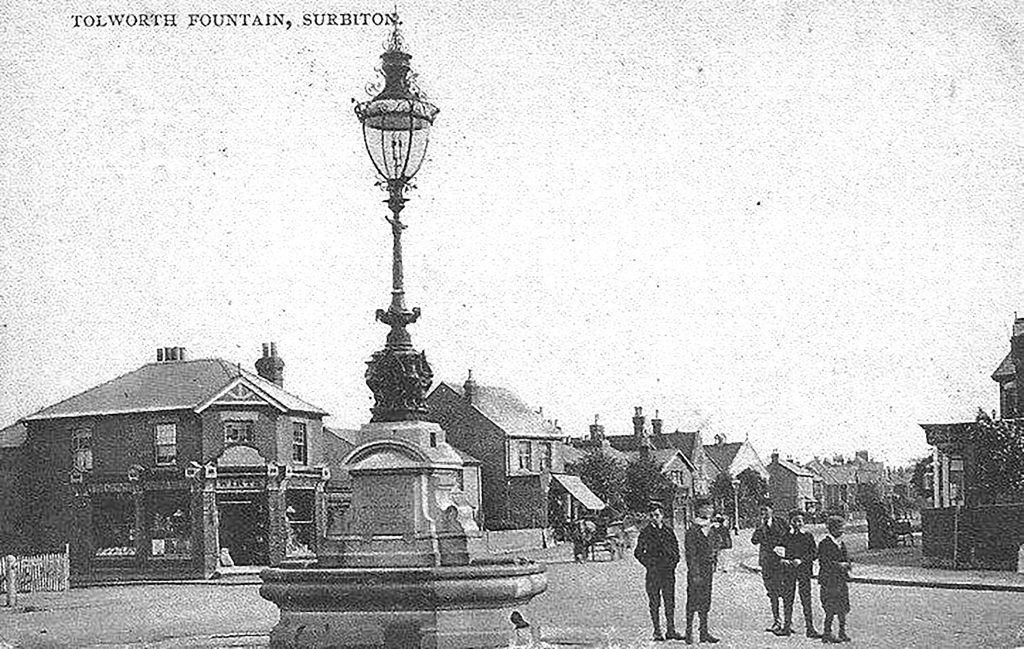 Lads by the fountain. The shop to the left, at the corner with Beaconsfield Road, is now Jezzards estate agent 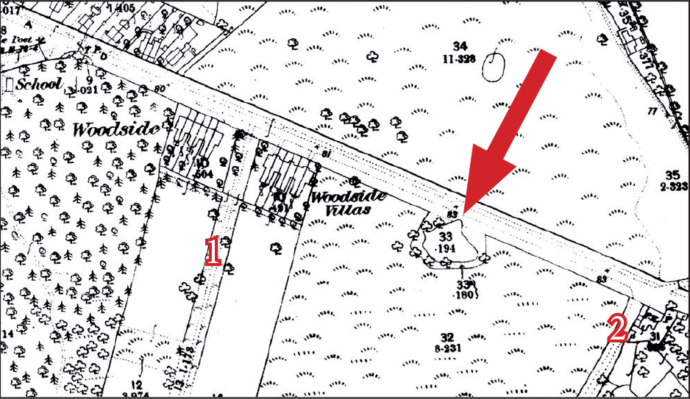 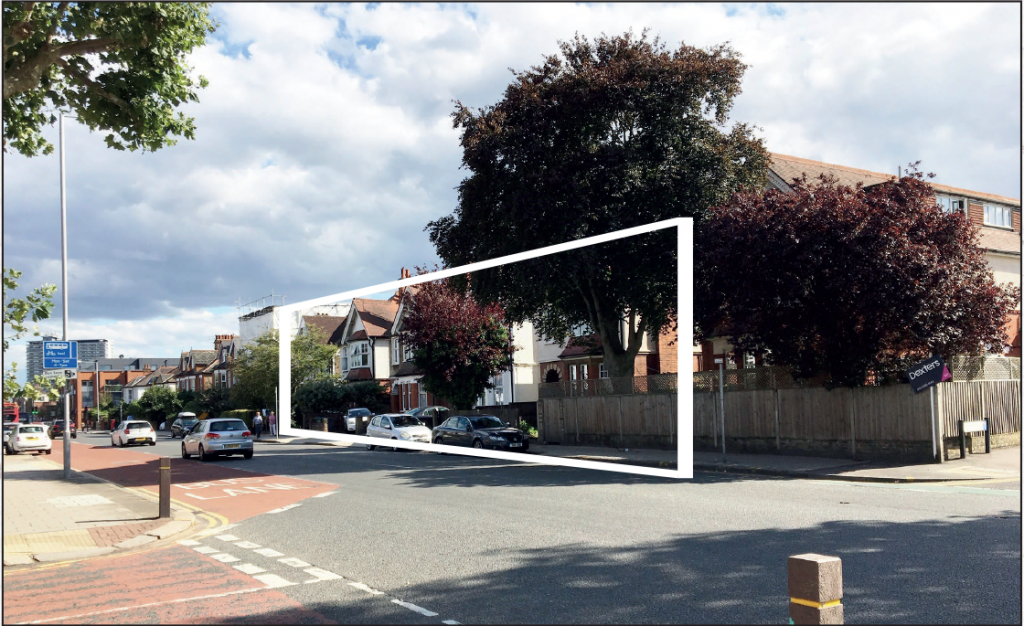 The pond, as wide as five K2 buses nose-to-tail, stretched 50 yards from 336 to 348 Ewell Road today. This view (Tolworth Tower is far left) has Derby Road to the left and Egmont Road to the right