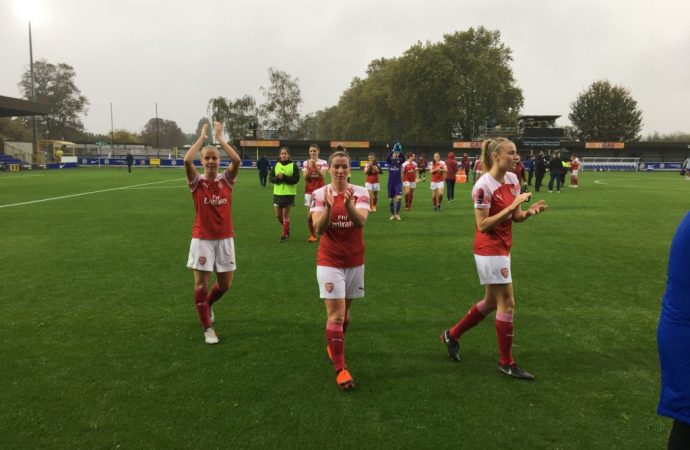 Chelsea are hoping for a full house at Kingsmeadow on Sunday for the top-of-the-table clash with Arsenal Women which could see the Blues leapfrog the Gunners into first place. The match – a 3pm kick-off – is one that Chelsea manager Emma Hayes is particularly relishing, as the corresponding fixture last season still haunts many

Chelsea are hoping for a full house at Kingsmeadow on Sunday for the top-of-the-table clash with Arsenal Women which could see the Blues leapfrog the Gunners into first place.

The match – a 3pm kick-off – is one that Chelsea manager Emma Hayes is particularly relishing, as the corresponding fixture last season still haunts many of the players… a perplexing and mystifying 5-0 home thrashing for the Blues.

Yet Chelsea’s record in this fixture is a good one, down the years. After losing each of their first half dozen Women’s Super League games against Arsenal, Chelsea have lost just two of the subsequent 11, winning six and drawing three.

Statistically, the Blues are marginal favourites. Chelsea are unbeaten in their last four WSL matches against reigning champions, keeping three clean sheets in the process.

It’s a fascinating clash between the Lionesses’ two Beths; teammates Beth England and Beth Mead, both of whom shone in otherwise lacklustre England performances (despite the rose-tinted spectacles national manager Phil Neville wore in summing up the side’s current form).

The Gunners’  Beth Mead has provided more assists – 13 – than any other player in the WSL since the start of last season.

Arsenal may be the early leaders in the WSL, having won three out of three, but Hayes’ team are yet to be beaten.

“Although it’s a derby game we don’t prepare anything differently,” said Hayes this week. “It’s an opportunity for us to assert ourselves at home, and that’s important in front of our fans.

“The players know what I expect, and I know that this is a group committed to push on from last season. I feel this is an ideal opportunity to demonstrate the work that we’ve been doing.

“It’s a game where you have to take your chances, and that’s something we’ve been concentrating on. At the top, games are won and lost in just a few instances, so it’s important for us that we’re efficient, and collectively make it difficult for Arsenal.”

Asked about last season’s 5-0 drubbing, Hayes said: “I don’t think we can forget that game. Everybody is aware of the result, but it also triggered a really good European campaign for us, so a lot of good came from that.”

With free flags for supporters, and pre-match musical entertainment from 2pm, the first league match of the season at Kingsmeadow is expected to be close to a sell-out. The weather forecast for Sunday is mild, but wet.

“The difference our home fans make in terms of influencing the team is by the noise they make,” added Hayes. “Last season the fans showed why they are the best in the country, and if we’re going to progress again this year that noise has to increase because you have to make home advantage count.”