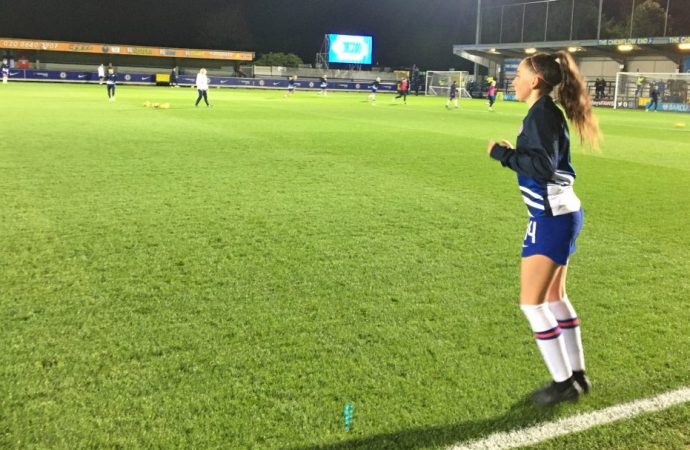 Sixteen-year-old Charlotte Wardlaw, pictured warming up, made a confident and positive debut for Chelsea Women as Spurs were beaten 5-1 on a bitterly cold night at Kingsmeadow in the Conti Cup. The teenager, who is just as comfortable in midfield as she is in defence, played the full 90 minutes at right back as the

Sixteen-year-old Charlotte Wardlaw, pictured warming up, made a confident and positive debut for Chelsea Women as Spurs were beaten 5-1 on a bitterly cold night at Kingsmeadow in the Conti Cup.

The teenager, who is just as comfortable in midfield as she is in defence, played the full 90 minutes at right back as the Blues, in a 4-2-3-1 formation took on a Tottenham side in their more traditional 4-4-2.

Manager Emma Hayes was delighted with Wardlaw’s first appearance, and that of sub striker Emily Murphy who came on in the second half, and was quick to praise the hard work of her academy trainers for bringing both girls through the Chelsea system.

As temperatures plunged to freezing, a busy Beth England had several chances to open up Spurs, while Hannah Blundell had what looked like a reasonable shout for a penalty after being brought down clumsily in the Spurs area in the 23rd minute.

Shortly after the half-hour mark, Wardlaw made a long, bold upfield foray, exchanging passes with the zippy Blundell on the right as she charged through to the opposition area, but just ran out of road in the Spurs box.

Perhaps it was why, as she breathlessly tracked back, she received a yellow card moments later for a hearty and slightly mistimed tackle on Lucy Quinn, which left the Tottenham player sprawled on the ground.

It was 0-0 at the break, but three minutes after the restart, Wardlaw was lucky not to be shown a second yellow for another foul. Ref Lisa Benn gave her a long, hard look before deciding it wasn’t worth further sanction.

From that moment on, the 16-year-old – ironically a Spurs fan as a girl – was good as gold, and played out the rest of the match with maturity.

Chelsea finally got a grip on the game after 50 minutes; England’s shot bounced back into the danger zone, and Drew Spence pounced, firing it into the roof of the net.

Three minutes later, Erin Cuthbert’s 22-yard piledriver curled through the cold night air and slammed against the bar, before – on 56 minutes – Blundell was once again felled in the Spurs area, and this time Benn pointed to the spot.

Without No1 penalty taker Maren Mjelde on the pitch (she was an unused sub), Cuthbert stepped up to the challenge. Her dancing stop-start run-up did the trick, Chloe Morgan dived the wrong way and the Scot slid the ball home for 2-0.

Two minutes later it was 3-0 as Ji So-Yun and England exchanged passes on the gallop, and England fired home.

On the hour mark, Murphy came on in place of Cuthbert and made a good impact up front, showing some neat touches, sprinting runs and impressive strength for a 16-year-old.

The next goal, on 76 minutes, came from left back Deanna Cooper, having one of her best games in a blue shirt. She exchanged a pass with England, then rifled home on the run – the pick of the night’s scoring.

There was time for a Spurs consolation – a 78th minute goal from Rosella Ayane, chesting home at close range past Carly Telford, who was otherwise commanding.

When captain Magda Eriksson’s curling free kick was tipped on to the bar in the 85th minute by Morgan, Beth England was on hand to head the rebound home for a final score of 5-1. Murphy almost added another in stoppage time with a splendid run on goal, but her shot was muffled by the busy Spurs keeper to deny her a debut score.