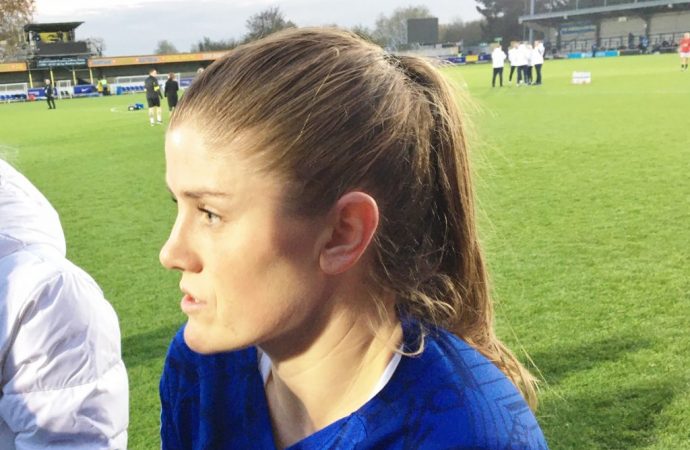 If Chelsea Women are awarded a penalty in their Sunday lunchtime game against Everton – a team who are punching above their weight this season – expect an ice-cool Norwegian to step up and take the kick. Maren Mjelde scored from the spot against Manchester United (pictured below, as the packed Chemflow End held their

If Chelsea Women are awarded a penalty in their Sunday lunchtime game against Everton – a team who are punching above their weight this season – expect an ice-cool Norwegian to step up and take the kick.

Maren Mjelde scored from the spot against Manchester United (pictured below, as the packed Chemflow End held their breath) to give Chelsea their only goal when the recent crucial WSL match at Kingsmeadow seemed to be heading for stalemate, and she fearlessly volunteers for duty every time a penalty is awarded.

The Ice Queen of Chelsea Women, she is enjoying one of her richest and most dependable runs of form for the Blues, and the 30-year-old will need to be at her best at right back when the team travel to play the Toffees, who currently lie an unexpected (but wholly deserved) fourth in the league table.

How did she feel after playing such a crucial part for the Blues in that eked-out victory over Man U? “I think it’s a difference from last [season],” she said, reflecting on the sluggish start that Chelsea made to the campaign when they struggled to score in early matches. “Then, we wouldn’t have won this game,” she added. “We’re doing it this year, but [United] are a good team, with a good plan, and they made it difficult.”

Last season, Emma Hayes’ side drew six out of 20 league games, finishing third and therefore missing out on the Champions League behind the teams which now sit one point below Chelsea: Arsenal and Manchester City.

So why was Mjelde the one chosen to take the all-important penalty kick against United? “I was first on the list today [to take penalties],” said the Norwegian. “It certainly wasn’t the best penalty I’ve done, but it was enough and that’s all that matters!”

Flip back six months, and she was again the model of composure during the World Cup Round of 16, when called upon to take a critical penalty in one of the most significant matches of her playing career.

Norway faced Australia in the Stade de Nice – a match, interestingly, in which she came up against new Chelsea recruit Sam Kerr. “Yes, I’ve played against her just that once,” Mjelde confirmed.

In the game in sunny France it was 1-1 at the end of normal time, with Mjelde playing alongside Chelsea team-mates Maria Thorisdottir and Guro Reiten. So everything boiled down to penalties.

The usually dependable Kerr blazed her effort so far over the bar that it almost troubled holidaymakers on the distant beach, but Mjelde – the Norwegian skipper, wearing 6 – remained cool as a cucumber and fired her penalty deep into the corner of the net to pave the way to victory, setting up that famous quarter-final clash with England in Le Havre (England triumphed 3-0) in which she played as a central defender in a pairing with her old mucker Thorisdottir.