Hit for six by Sobers 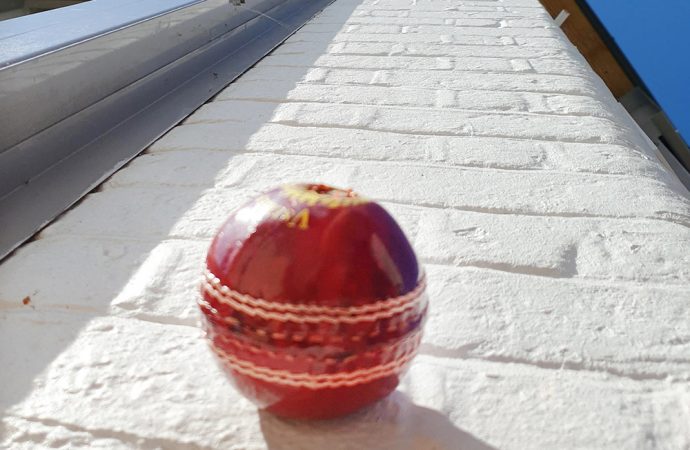 Hanging from a string at the doorway of a recently opened Surbiton cafe is a cricket ball. It’s at Coffee on the Corner, where Beaconsfield Road meets King Charles Road. But what is it doing suspended there? It commemorates the mighty six scored by arguably the greatest cricketing all-rounder of all time, Garry Sobers, who

Hanging from a string at the doorway of a recently opened Surbiton cafe is a cricket ball. It’s at Coffee on the Corner, where Beaconsfield Road meets King Charles Road. But what is it doing suspended there?

It commemorates the mighty six scored by arguably the greatest cricketing all-rounder of all time, Garry Sobers, who in July 1959 was guesting in a charity match at the Alexandra recreation ground.

So powerful was his shot that it sailed out of the ground, over the railings and across the road, before falling to earth in front of the door to the then corner shop.
A combination of factors led to the rare, but not unheard of, occurrence of a ball flying clean out of the ground which had been used for local cricket matches since 1912. Sobers was a left-hander, so the boundary by the fence was easier for him to reach, and the 22-yard cricket strip was, in those days, slightly closer to the railings.

Historian Bob Phillips, co-author of the definitive The Story of Tolworth, explained: “The doorway is famous; it’s where the ball landed when Garry Sobers – Sir Garfield to you and me – hit that monster six in July 1959.

“The cricket pitch on Alexandra rec was a mite nearer Beaconsfield Road then than it is now, but it was still a spectacular boundary shot, from a spectacular cricketer.”

The danger to the public from flying cricket balls in Tolworth was highlighted in a report in the Surrey Comet the following month, August 1959, headlined Shattering Surbiton’s Sundays.
Surbiton Council’s open space committee debated what to do about the problem of cricket balls landing in the garden of a home at the recreation ground end of Derby Road while the householder was snoozing in his deckchair, a couple of feet away. In the end, the committee did what all committees do best – put off any decision to the following year.

In July 1959, Garry Sobers was the £500-a-season pro at Radcliffe Cricket Club in Lancashire, but his contract allowed him to guest for any other side if Radcliffe didn’t have a match.
Which is how he came to be playing for a Surrey County Cricket Club XI in Tolworth in a charity fundraiser.

It had been organised by Ray Eades, now in his nineties, who still lives in Broomfield Road, just round the corner from the cafe. Ray arranged charity matches for the Surbiton RAF Association, a popular little club which, a month earlier, had beaten Old Tenisonians seconds by 113 runs. He took this snap of Sobers, soon to turn 23, on Alexandra rec.

Sadly there was no mention of Sobers’ feat in the Surrey Comet; the paper was embroiled in a five-week printers’ strike, and the presses were silent.

Ray’s evocative photo of Sobers is to be enlarged, framed and mounted in the café. There’s a poignancy to the picture. It was one of the last taken of a carefree youthful Sobers before an incident which was to haunt his life.

Two months after the Tolworth game, he was driving West Indies teammates Collie Smith and Tom Dewdney to London. At 4.45am on the A34 in Staffordshire the car crashed into a 10-ton cattle truck. Smith, asleep on the back seat, died from his injuries a couple of days later.

Sobers and Dewdney suffered cuts and bruises, but escaped serious harm. Sobers said he’d been dazzled by oncoming headlights… but was found guilty, at trial, of careless driving.
It was to have a profound effect on Sobers. For the rest of his long playing career he dedicated any of his successful batting or bowling displays to his former room-mate Collie.
Sobers, now 83, was born with six fingers on each hand. Astonishingly he removed the extra digits ‘using catgut and a sharp knife’ as a teenager. The Barbadian played 93 tests for the Windies.

The year before his Tolworth appearance, in 1958 at the age of 21, he had scored 365 not out against Pakistan – a record which stood until 1994 when it was beaten by one of the young players he had mentored, Brian Lara.

Knighted in 1975, Sir Garfield Sobers was no stranger to mighty sixes. He famously hit six successive sixes off a six-ball over in Swansea in August 1968 as captain of Nottinghamshire in a match against Glamorgan.

Tony Lewis, who went on to captain England, was leading Glamorgan at the time. He said of Sobers’ feat: “It was not sheer slogging through strength, but scientific hitting with every movement working in harmony.”

Last month some oik pinched the suspended cricket ball… but Kyle Hyams, who opened Coffee on the Corner in the summer, was planning to install a replacement as The Good Life went to press. 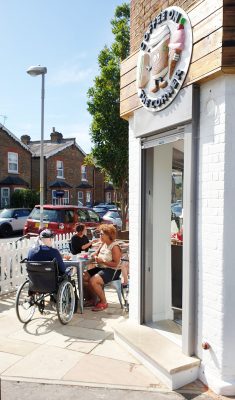 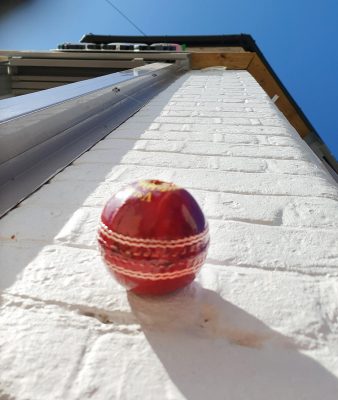 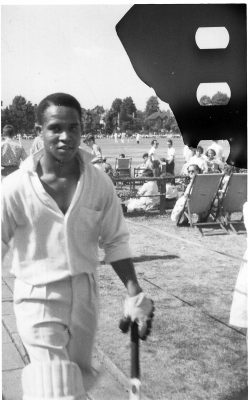 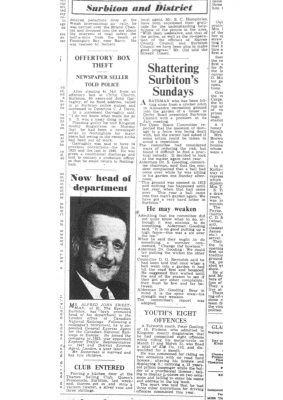 Above, Surbiton Council agonises about balls landing in residents’ gardens, as reported in August 1959. Scan courtesy of Kingston History Centre in the Guildhall 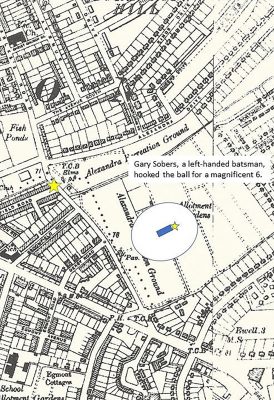 Bob Phillips’ map shows the location of the cricket pitch in Alexandra rec in 1959… and where Sobers’ six landed.