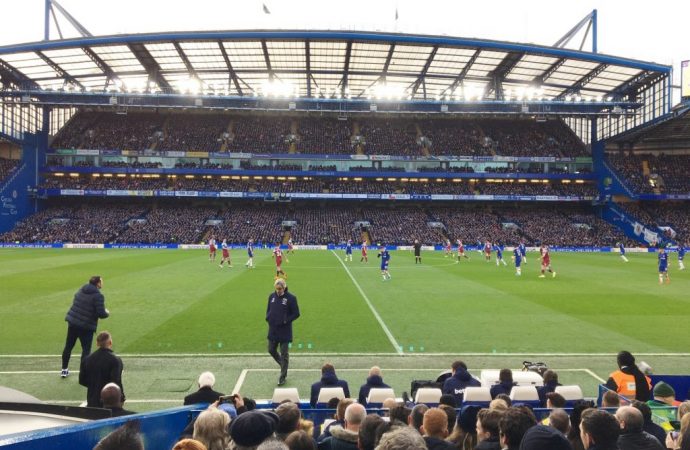 If referee Jon Moss had added an hour and five minutes of stoppage time to the end of this perplexing London derby instead of merely five minutes, Chelsea still wouldn’t have scored. In a match which felt like a weird Life on Mars throwback to the 70s or 80s, the Blues came up against a

If referee Jon Moss had added an hour and five minutes of stoppage time to the end of this perplexing London derby instead of merely five minutes, Chelsea still wouldn’t have scored.

In a match which felt like a weird Life on Mars throwback to the 70s or 80s, the Blues came up against a frankly desperate West Ham side led by a manager few Irons particularly like.

Fortunately for Manuel Pellegrini’s Hammers, instead of facing the side which had just enjoyed a lively, creativity-packed 2-2 romp out in sunny Valencia, this Chelsea team was dull, lacklustre and unimaginative, possibly thrown by having to play a match at, of all times, 3pm on a Saturday.

No matter how much Frank Lampard paced and how many muttered curses he uttered, the Blues couldn’t conjure up anything worth talking about, and West Ham were slightly unfortunate not to be 2-0 winners instead of simply 1-0 winners after VAR ruled out a second ‘goal’ for handball.

Chelsea were simply awful. Olivier Giroud was given a rare chance to start and, frankly, didn’t impress. He must be match rusty as he’s had so little playing time this season, but this was a clunky performance, with the supporting cast equally guilty of failing to create worthwhile chances.

The opening few minutes were fine; Chelsea attacked and fired a series of shots at the West Ham goal, but the Irons held firm and from then on – for the subsequent 80 minutes – never really looked threatened, leaving their overjoyed fans to chant abuse at Lampard and the home supporters as they relished their first Stamford Bridge win in 17 years.

In fact, there can scarcely have been a game in which Lampard was name-checked so much by both sets of fans, although the West Ham chants could scarcely be called complimentary.

Goalless and clueless at half-time, Lampard prepared to ring the changes. But three minutes after the restart, in an impressive solo run, Aaron Cresswell weaved down the left wing, past all the Blues subs warming up, and through the Chelsea defence where he switched to his right foot and curled the winning goal into the net.

With William, N’Golo Kante and Callum Hudson-Odoi on instead of Jorginho, Pedro and Giroud, it should have got better. But it didn’t. Only Kepa’s athletics kept the score down as first Angelo Ogbonna and then Michail Antonio were denied by superb saves.

Chelsea couldn’t click, and after VAR ruled out Antonio’s attempt because of use of the hand, that was it. West Ham ran the clock down, and as the Blues deserved nothing, they got nothing.

Irons keeper, 33-year-old ‘new boy’ David Martin (watched from the press box by his dad, Alvin) was on good form, Mason Mount was anonymous but his great mate Declan Rice had a good game, and afterwards Lampard refused to blame Tammy Abraham’s absence for the result.

“That was enforced,” he said of his hip-injured striker. “But when we have a physical game and give everything physically, I have to see how fresh we can be. It gives me a chance to look at other players… obviously we’re not going to get through the season with the same 10 or 11 players.

“I think the team we had out there, for sure, have the quality to go out and win this game. The fact that we performed below par is the reason that we didn’t. There are questions that will be asked of this squad from the outside, and questions I want to ask of this squad from the inside… but I’ve not had to sit here many times [after matches] and say ‘We were below par today’.”

He concluded by saying that today was “one of those days”, and that it wasn’t a time for harsh reactions.

Chelsea are almost immediately back in action – at the Bridge – in midweek when John Terry returns with Aston Villa. “It’s time for a bit of character,” said Lampard. “To see how our reaction is for Aston Villa.”