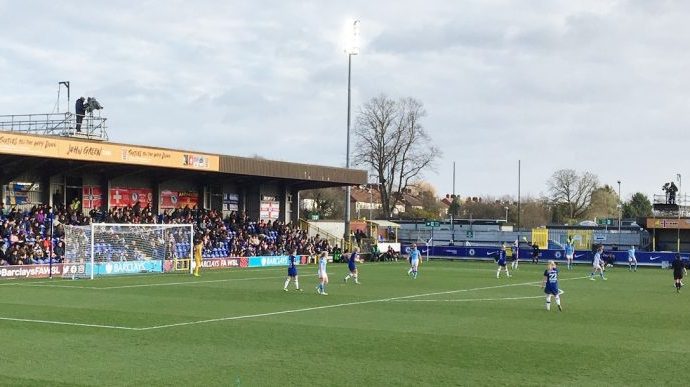 In one of the most impressive comebacks seen at Kingsmeadow for a long while, Chelsea Women turned defeat into victory in the space of three breathless minutes to beat Manchester City and maintain their Women’s Super League title tilt. The game looked up just before the hour mark when Caroline Weir lashed a ferocious left-foot

In one of the most impressive comebacks seen at Kingsmeadow for a long while, Chelsea Women turned defeat into victory in the space of three breathless minutes to beat Manchester City and maintain their Women’s Super League title tilt.

The game looked up just before the hour mark when Caroline Weir lashed a ferocious left-foot drive past Ann-Katrin Berger to break the deadlock between these two evenly matched sides in the lunchtime kick-off game, live on the telly.

As the vast majority of the 3,498-strong crowd slumped down, fearing the worst, Emma Hayes’ spritely team simply upped the tempo, flew forward, equalised and then snatched a winner that at one time looked beyond them.

It was testament to Hayes’ management, the dressing room spirit, the on-field leadership in the shape of captain Magda Eriksson and the never-say-die attitude which now typifies Chelsea Women’s performances, in all competitions and in all arenas.

The Sunday game had started slowly and warily; the sides cancelling out each other’s attacks on a field laden with Lionesses – a classic dark blue v light blue duel.

With ref Amy Fearn allowing a lot of seemingly card-worthy encounters to go unpunished, the game flowed from end to end, without any real risk of a serious attack on either goal.

Beth England finally got a shot away after 36 minutes, testing Ellie Roebuck, before – in first-half stoppage time – another England shot came close, and Maren Mjelde unleashed an impressive long-range effort which ricocheted away off the bar.

Chelsea had the best of the initial exchanges in the second half, with Ji So-Yun’s best attempt flying back up the pitch off the post.

Then, on 59 minutes, City turned up the pressure. Jill Scott, who had a good game for the light blues, saw her header saved before Weir galloped upfield, evading challenges, and fired home to give the visitors the lead.

It galvanised a Chelsea team who were, until then, guilty of some wayward passing and a lack of joined-up thinking. Suddenly the Blues were on the charge, with a crisp England header going just wide as the chances increased.

Ramona Bachmann came close, but when Guro Reiten was replaced by Drew Spence, the tide turned. Chelsea’s attacks found new focus, and on 79 minutes – after Ji’s shot was parried by Roebuck – England was alert enough to head the loose ball home to level.

When, two minutes later, Erin Cuthbert (her proud dad watching from the west stand) sent Chelsea’s seventh corner of the match into the City area, England took aim and shot. Roebuck blocked, but Mjelde was alert enough to stab the ball home for what proved to be the winner.

It was the industrious and bothersome Spence who inspired and lifted Chelsea Women, but this match stands as a terrific example of teamwork and collective determination, maintaining the Blues’ place as serious title contenders with just one league match remaining this side of the new year.

Next up for Chelsea Women, a Conti Cup clash under the floodlights at Kingsmeadow against Reading on Wednesday night, Dec 11, 7pm, with tickets for the match at £3 for adults, £1 for U20s and over 65s. It’s the last home game of 2019.