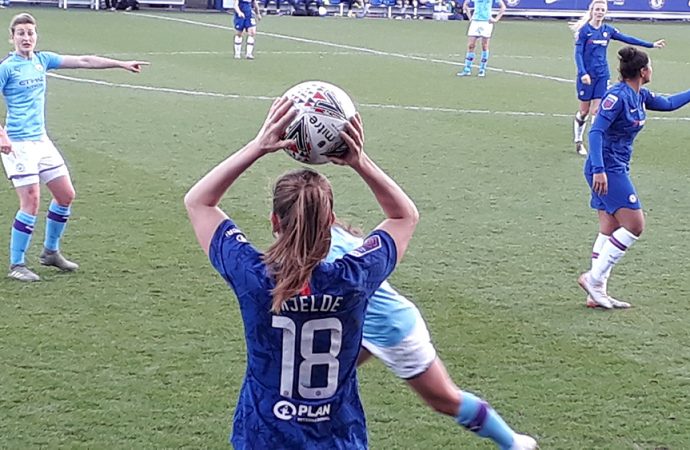 Could Chelsea use a throw-in specialist? In the recent Chelsea Women v Manchester City Women clash at Kingsmeadow, City’s second sub proved to be a near-deadly secret weapon.

Caroline Weir had put the light blues ahead on 59 minutes, hammering home Keira Walsh’s long looping cross, before Chelsea responded with two quick-fire goals with barely 10 minutes remaining – one from Beth England, the other from Maren Mjelde (pictured above, taking a second-half throw for the Blues).

City manager Nick Cushing responded immediately. Having earlier subbed Tessa Wullaert for the fiesty Georgia Stanway in an attempt to halt Chelsea’s best concerted attacking spell of the match, he introduced Megan Campbell in the 84th minute, in place of Demi Stokes. And it very nearly paid dividends.

Campbell, a 26-year-old Republic of Ireland international who wears 5 and is under contract at Manchester until the summer of 2020, has a reputation as someone who can hurl a ball further than anyone else in the Women’s Super League (and, indeed, virtually anyone in the men’s game)… but Chelsea’s players were still nearly bamboozled by the prodigious length that she was able to generate.

She hurled a couple of exocets from the west touchline, where there is absolutely no scope for taking a normal run-up as the boundary boards are scarcely a yard from the edge of the pitch.

Most Chelsea players actually lean back against the perimeter fence to gain some extra whip as they take one step forward and then release.

Not Megan Campbell. She dried the ball to maximise her grip, walked five yards back up the pitch from the point where the throw was to be taken, then sprinted forward down the touchline, twisted and unleashed first one, then later another, phenomenal fling right into the heart of the Chelsea penalty area.

The first came within a whisker of generating a goal, and was all the more unexpected as she had only been on the pitch for three minutes, and nobody had twigged that the human catapult was now in play.

Both throws very nearly caught Chelsea out, but a mixture of good fortune and last-gasp defending preserved the lead for the Blues.

So how does Campbell do it? “Fortunately my arms are quite hyper-mobile, and can go further back than the average person,” she explained recently of a hurling method that serves both City and Ireland well.

Perhaps it’s something in the water. The supreme long throw-in expert in the Premier League was Rory Delap, another Irish distance chucker, who created goal after goal for Tony Pulis’s Stoke City side, back in the day.

But Campbell usually requires a long, flat run-up before releasing the ball, and Chelsea – while aware of the danger that she could pose – may have assumed that the tight boundaries at Kingsmeadow would make the long lob an impossibility.

Chelsea don’t possess a specialist long thrower. While every member of the squad is able to take throw-ins, Erin Cuthbert is popularly viewed as the one likeliest to generate serious distance.

With Campbell’s missiles such a useful weapon in Manchester City’s armoury – especially when introduced as an unexpected ‘throw of the dice’ late in a game – Blues manager Emma Hayes will introduce extra throw-in coaching and assessment at the Cobham training base, once the players are back from their Christmas break, to see if another catapulter is simply waiting to be discovered.