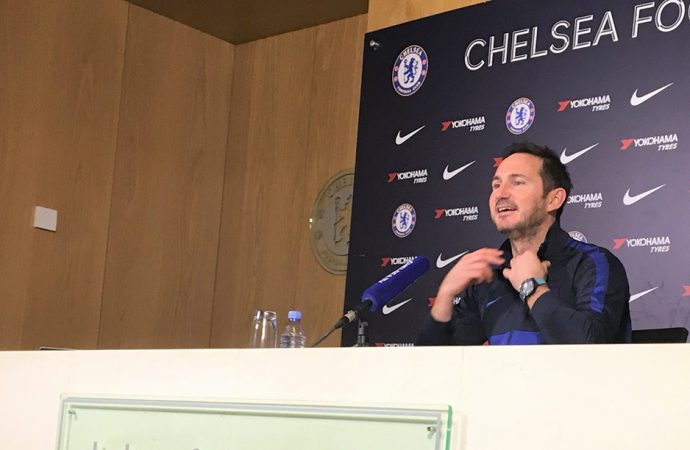 Chelsea manager Frank Lampard has given German defender Toni Rudiger his 100% backing in the aftermath of the weekend’s ill-tempered Blues victory at White Hart Lane, and the allegation of racist chanting that marred the match. It follows Tottenham lodging an appeal against the red card shown to Son Heung-Min for a studs-up rake of

Chelsea manager Frank Lampard has given German defender Toni Rudiger his 100% backing in the aftermath of the weekend’s ill-tempered Blues victory at White Hart Lane, and the allegation of racist chanting that marred the match.

It follows Tottenham lodging an appeal against the red card shown to Son Heung-Min for a studs-up rake of the German right back’s side, despite VAR taking two full minutes to analyse the incident and ensure the correct decision was made.

Mourinho has also implied that Rudiger played up the incident, although the Spurs manager has also taken pains to condemn all racist behaviour, and has stated that it has no part in football. Lampard described Mourinho’s criticism of Rudiger as “disappointing”.

“So I hope to be punished twice is enough, he doesn’t deserve for the third the fourth or the fifth.”

But Lampard, in an early-morning press conference at Cobham ahead of the Chelsea v Southampton match at the Bridge on Boxing Day, takes an opposing view of the incident and the fall-out to his former boss Mourinho, having comprehensively out-thought The Special One by ambushing the Spurs team with a little-tried formation involving three at the back instead of the customary four.

“I spoke to Toni briefly after the game,” confirmed Lampard. “But I haven’t had the time to speak one-on-one to him about the incident; the lads were off yesterday. I’ve seen Toni’s social media post; it was well-put, it was from the heart and it’s obviously something he feels very strongly about, so I’ll speak with him this morning.

“I’d like to think the players know that I’m with them on anything like this [the racist chant incident]; we had a similar situation with Tammy [Abraham] and I was pretty firm on that and behind the scenes with Tammy, and I’ll have a similar conversation with Toni this morning so he knows I support him and all my players in any of these situations.”

On Mourinho’s claim that Rudiger had exaggerated the harm he suffered, Lampard said: “I think with Toni, when he’s having to post after the game about something that we know is a huge deal, to question his integrity in that time is disappointing for sure.

“I think, pretty universally and certainly what I heard from the commentary and all the post-match reflection, that the Son incident was a red card. Now I’ve said after the game that it wasn’t a brutal red card, but it was an instinctive one that warrants a red card in the modern day… and VAR took a couple of minutes so there was no excuse; the referee saw it perfectly.

“I wouldn’t question Toni’s integrity on that. If it becomes a question about people standing up and not falling down in the Premier League, I think there were a couple of incidents in the last 15 minutes of the game when Tottenham players were going over in the box, attempting to win a penalty, so we can open up that debate to [cover] many incidents in many games across the Premier League.”

Lampard was reluctant to be drawn into a big debate on racism in the wider society, but he stressed that Chelsea as a football club had had to deal with racist incidents of its own – past incidents that the club had dealt with firmly.

Asked if he felt the atmosphere at football grounds was harsher today than in his own playing days, Lampard said: “I felt it was pretty harsh in those days; I went to White Hart Lane and it was harsh back in the day for many reasons. Not just White Hart Lane, but other London derbies. But teams would have come to Stamford Bridge and would have felt that, so I’m not sure it’s much harsher.

“We have a problem where people are very negative and very aggressive on social media, and we all have to look at ourselves. Social media has become a bit of a gateway for people to vent their frustrations and throw abuse at people; it’s why I’m not so mad about [social media].”

Spurs have investigated the allegation of monkey taunts being made to Rudiger, but have yet to reach any firm conclusion, despite employing lip-readers to try to work out what, if anything, was said from CCTV footage in White Hart Lane.

Meanwhile, police have so far only arrested one person – a Chelsea fan – for allegedly directing racial abuse at Son. Nothing has yet been said about any arrests in connection with the missile lobbed at Chelsea keeper Kepa from among the Spurs fans.

Mourinho believes that Rudiger should have ‘stood up and played’ rather than fallen to the ground after Son’s challenge on him. “In the Premier League I love there is no space for what Rudiger did,” said the former Chelsea manager.

As the Chelsea v Southampton fixture looms on Boxing Day afternoon, Lampard has said that defender and captain Cesar Azpilicueta has a slight problem around his hamstring, but it may not be enough to force him to miss the game. Other than that, there are just some “bumps and bruises”.