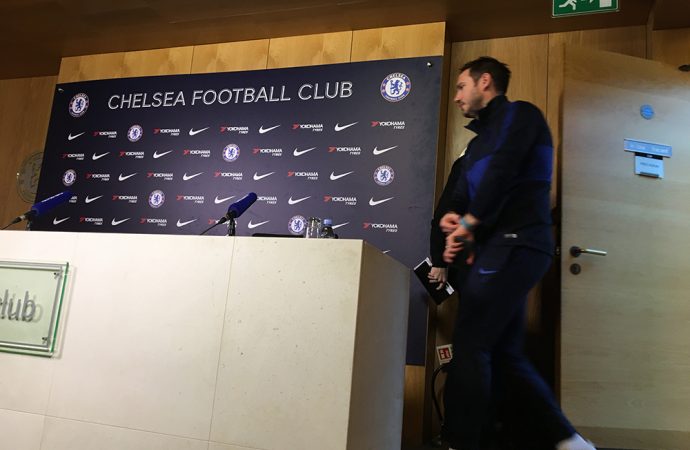 You’ll have to wait and see whether Chelsea use the 3-4-2-1 formation that ambushed Jose Mourinho last weekend, or stick to a 4-2-3-1 that has been employed for most of this eventful season, when the Saints come marching in to Stamford Bridge or when the Blues head to the Emirates on Sunday. Blues manager Frank

You’ll have to wait and see whether Chelsea use the 3-4-2-1 formation that ambushed Jose Mourinho last weekend, or stick to a 4-2-3-1 that has been employed for most of this eventful season, when the Saints come marching in to Stamford Bridge or when the Blues head to the Emirates on Sunday.

Blues manager Frank Lampard – pictured arriving at his Christmas Eve press conference at the Cobham training ground – agreed that the unexpected tactical change had been pivotal in securing a 2-0 win (against most expectation) at White Hart Lane, but said it was something he’d keep up his sleeve rather than share with the world.

Asked if Chelsea had a distinct home advantage on Boxing Day over Southampton as the Blues are at home, he said: “It’s still focused and it’s still busy. The lads will train this morning and on Christmas morning, then spend the night at a hotel on the evening before the match, and prepare as we would do.

“As footballers we have a lot of benefits in this life, and it’s one of those periods where we have to sacrifice a bit of family time, but the points that are on offer to us over this busy period when the games come thick and fast are important to us, so we’ll do everything right in our preparation.”

On the issue of using a three-at-the-back formation for future matches, Lampard kept his cards closely to his chest. He might, he said, when circumstances demanded it, but he wouldn’t be telegraphing any thoughts on formations to rival managers ahead of any game.

Lampard played the 3-4-2-1 formation up at Wolves, away to Lille and against Spurs, so it has been used sparingly but effectively, and remains an alternative – even as a switching option mid-match – for his team.

“We’ve played it a few times; we’ve gone to [3-4-2-1] in games and I think it can work. The reason we played it at Tottenham is that we had a good look at how Tottenham play, and I felt it was the best way for us to play. I spoke with the staff a lot last week, we worked on it in training a lot last week, and it did work, and it’s something we can use.”

Looking at all the performances in his short, but impressive, six-month career as Chelsea manager, Lampard said that he felt the Spurs game was his best showing, although the Ajax away match still pleased him.

“We dealt with Ajax brilliantly on the night, but going to Tottenham – and with Tottenham in good form, a direct rival, ourselves under slight pressure because of recent form, I thought the character and strength and the way we approached the game and controlled it from start to finish made it our best performance,” he said.

“We’re a little bit transitional this year, but hopefully [within the squad] the win at Tottenham will give us great confidence.

“Every game is tough; Southampton are in good form, Arsenal [next up for Chelsea on Sunday December 29 at the Emirates] have a new manager and they also have players that can hurt you. So both those games are going to be tough. We now need to show another side to our game, and get our home form to where we hope it can be.”