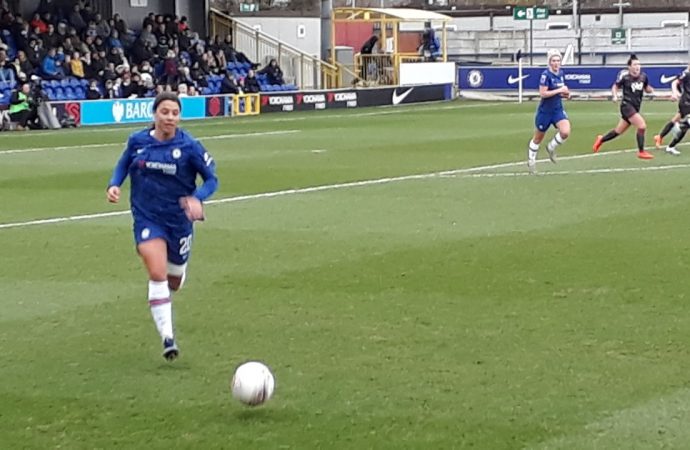 New signing Sam Kerr made her debut for Chelsea in an exciting, end-to-end duel against Reading… but it was her effect on the rest of the Blues team that most pleased manager Emma Hayes. Playing alongside Beth England as part of a two-pronged Chelsea attack, Kerr made a good, workmanlike contribution to her first club

New signing Sam Kerr made her debut for Chelsea in an exciting, end-to-end duel against Reading… but it was her effect on the rest of the Blues team that most pleased manager Emma Hayes.

Playing alongside Beth England as part of a two-pronged Chelsea attack, Kerr made a good, workmanlike contribution to her first club match on European soil as the Blues came from behind to beat the Royals 3-1.

Although she didn’t score, Kerr inspired excellent performances by England (with Phil Neville nodding his appreciation in the main Kingsmeadow stand), Drew Spence, Jonna Andersson and – most impressively of all – Guro Reiten, who had one of her finest, sparkiest matches in a blue shirt.

But this was an afternoon that was always going to be about Kerr. Hayes boldly listed her as a starter (joking with reporters afterwards that she’d planned to start the Aussie star in a forward’s position “for the last two years”), and it paid off with some dazzling co-operative work with England; the pair alternating between left and right positions at the head of Chelsea’s attack.

“I’m just finding my feet in England,” said Kerr. “I enjoyed it today; it was awesome working with Beth; she’s a quality player.” She said that she found the conditions “freezing” in the UK (it was actually about 7 degrees, so the worst is yet to come!), but said that the other girls in the Chelsea squad had helped her settle in and had made her very welcome.

“I’ve settled in as best I can in the last nine days,” she said, adding that as five of those days had been full-on training, she hadn’t had a great deal of time for any opportunities to properly explore London. “The girls have been learning from me, and I’ve been learning from them.”

Not all the squad were there to support her. A bout of flu has swept through the Cobham training ground in the past week and a half, leaving Ramona Bachmann and several others sniffling and coughing in their beds.

Kerr only had good things to say about Kingsmeadow. “I like it; it’s a compact stadium, and the crowd was lively and I really enjoyed it,” she said.

Was she surprised to have been thrown straight in at the deep end, rather than – say – start a couple of games on the bench as former Chelsea player, now commentator, Eni Aluko had predicted she would? “Look, I always want to play. I was always just going to put my head down at training, and do what I could,” she said. “I’ve been a bit rusty, coming back from a break.  I always want to start.”

She said that her thoughts were still with her countrymen and women back in Australia, as bush fires rage out of control in sky-high temperatures. “It’s been really tough; you feel quite helpless over here. It’s really sad and it’s been tough, but hopefully they’ll get rain soon.”

Asked about the pace of the match today, she said that the real difference she had noticed was the width of the football pitches. “It was a pretty hard pace today, but the real difference is that in America the fields are much bigger; so they stretch out much more… but I really enjoyed it.”

She admitted to having been “nervous” about starting, but said that Beth England was a quality player and that she’d really enjoyed their double act up front.

Why England, when she could have gone to any country in Europe and been welcomed? “I’ve always been attracted to English football, and when I had a chat to Emma it seemed like a good fit for me.”

Kerr was clattered by Reading goalie Grace Moloney moments after the Royals had taken a 15-minute lead after captain Fara Williams had driven a powerful right-foot shot past Ann-Katrin Berger. It led to the debutante being treated on the pitch as ref Stacey Pearson showed Moloney a straight red card.

“I’ve had a few challenges like that in training already, so I’ve already had my welcome to England!” said Kerr. “But that’s OK, it’s a contact sport and I took one for the team. For the last few years I’ve noticed that goalies and defenders have been getting more rough, but I like it like that, and I’ve been training with Millie and Magda!”

With Reading down to 10, Chelsea worked their way back into the game and levelled on 40 minutes through England, who accepted an assist ball from Kerr, rounded sub keeper Rachael Laws and slid the ball into an empty net.

It was 2-1 after 63 minutes, with Reiten lobbing the prostrate keeper who had just blocked a Kerr shot. Then sub Erin Cuthbert made it 3-1 with a quarter of an hour remaining, pouncing on the ball after England’s initial shot had been parried by Laws.

Kerr was eventually subbed for Hannah Blundell, and was given a great ovation from the crowd as she made her way off the pitch. Afterwards, with several Australian media teams paying close attention to her every move, she met fans, signed autographs and cheerfully posed for selfies.

All in all, a memorable debut. 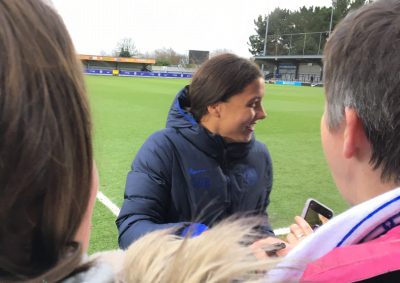