How to beat Arsenal 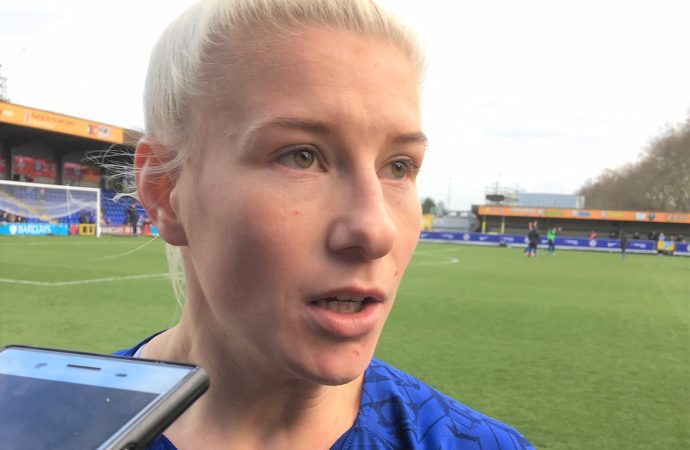 How can Chelsea defeat Arsenal in this weekend’s crunch fixture as the Blues travel to north London to contest what may prove to be the pivotal match of the 2019-20 WSL season? For manager Emma Hayes, the key is denying the other side a goal… with a firm belief that it will be impossible for

How can Chelsea defeat Arsenal in this weekend’s crunch fixture as the Blues travel to north London to contest what may prove to be the pivotal match of the 2019-20 WSL season?

For manager Emma Hayes, the key is denying the other side a goal… with a firm belief that it will be impossible for the Gunners to prevent Chelsea netting at least one shot in their current form.

“I don’t see how you can stop us scoring; I feel that about the team,” she said, pointing to the multiple sources for team goals.

Tickets for the WSL match between the London rivals at Borehamwood have sold out, prompting Gunners’ boss Joe Montemurro to float the possibility of using bigger stadiums for popular women’s games.

“It’s an amazing opportunity to showcase women’s football,” Montemurro said after more than 4,000 tickets were sold. “We need a couple more [sold-out games] though. One or two more and then I think we can start to send a message to play in the bigger stadiums. It’s a one-off situation and we need to be consistent, we need it to be a week-to-week scenario.”

Looking ahead to the match, Hayes acknowledges that Arsenal have a shoal of top, gifted players as well, but questions where the goals will come from if Vivianne Miedema has a subdued afternoon.

So who will win? “The team that keeps a clean sheet,” said Hayes. “And I don’t feel it’s about [Arsenal] shutting one player down in our team. I think if you want to get tight to Beth England [pictured above], you’ll have a problem with Sam Kerr. If you want to get tight to Erin [Cuthbert], then you’ve got Guro [Reiten], whose form is top. Then you’ve got Ji [So-Yun].”

Ji’s brace against Bristol City in the 6-1 steamrollering last weekend has given the South Korean a lift. She scored either side of half-time (her goals actually achieved in just five minutes of playing time) to help inflict the resounding victory, but she is well aware of the significance of the game against the Gunners. “We need to beat them,” she declared. “It’s a big game. We have to win; we can’t draw, we can’t lose. I never think we will lose the game! We’ve been training hard, and we need to focus on the game.”

Ji was also on target in midweek against Villa in the Conti Cup, underlining her good form.

Looking ahead to the game, England believes that she is already forming a potent up-front partnership with new signing Kerr, although their development as a striking pairing has been disrupted by the sickness that has swept through the squad in the past couple of weeks, and – frustratingly – Kerr still hasn’t got off the mark.

“You’ve got to give her time to settle; she’s under a lot of pressure,” said England. “For me she’s a great girl, and she’s settled in well. It’s nice to be playing alongside her.”

England said that the only outcome the Chelsea team were contemplating against Arsenal was a victory. “We want to win the league. We’ve proved we can beat Arsenal once [already this season], and we’re definitely going away to do it again. All our minds are set on winning the game – we know we’re playing well, and we just have to make sure we’re not conceding sloppy goals.

“That’s been our main problem; we seem to have to go one-nil down before we get a bit of a kick up the arse to go again! It’s not good enough. [Against Bristol City] We conceded a goal from a throw-in, and it shouldn’t be happening.”

Nevertheless, England will not give up if Chelsea do go a goal down to Arsenal. After all, that’s precisely what happened the last time the sides met… and the Blues ultimately triumphed. “In fact, we’ve gone one-nil down in the last four or five games, and we’ve still come out with the win,” said England.

How does Hayes assess Arsenal’s threat? “My question to you would be: ‘If you took Miedema out of the team, how many more goal scorers would you have? She has been the difference and, fair play, she has been an unbelievable player. But we have to make our multiple players count,” she said.

Hayes insists that the formula for achieving victory at Meadow Park on Sunday afternoon is not simply a matter of subduing the ever-lively goal-scoring machine that is Miedema.

“They’ve also got unbelievable players like Kim Little, [Danielle] van der Donk and Jordan Nobbs,” said Hayes, underlining the complexity and challenge of the task ahead.

Hayes also refuses to accept that the Women’s Super League is now a straight two-horse race, as she is convinced that Manchester City will be there or thereabouts, contesting the title, right to the wire.

But there’s no escaping the fact that if Chelsea can defeat Arsenal away, it would make the title Chelsea’s to lose as – if they then won every remaining match in the WSL season – no one would, mathematically, be able to catch them.