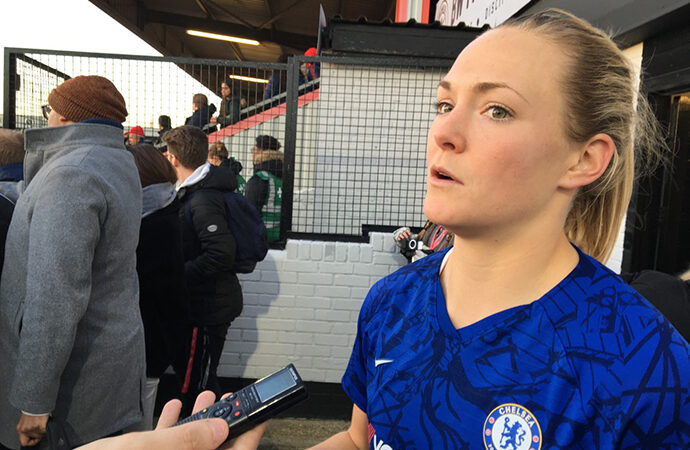 “The first half was one of the best halves we’ve ever played,” said delighted Chelsea captain Magda Eriksson in the wake of the 4-1 victory against Arsenal at Borehamwood on Sunday. “It was really clinical; we scored from our chances early on in the game, and then we could just see the game out,” she

“The first half was one of the best halves we’ve ever played,” said delighted Chelsea captain Magda Eriksson in the wake of the 4-1 victory against Arsenal at Borehamwood on Sunday.

“It was really clinical; we scored from our chances early on in the game, and then we could just see the game out,” she said. “I think we could still have had a better performance in the second half, but then they were going forward… but it’s still an amazing result, and we’re really, really pleased.”

Eriksson led from the back as a key member of an increasingly settled back four, with Jonna Andersson on the left, Mille Bright alongside Eriksson in the centre, and Maren Mjelde on the right.

The flu virus that swept through the Cobham training ground in the first fortnight of the new year seems to have finally gone, and Chelsea looked threatening from the moment the match kicked off.

A big contingent of Chelsea fans who had travelled to north London to support the side were entertained to a treat, as all four Blues goals were individual, and collective, crackers.

“The goals were unbelievable,” agreed Eriksson. “We’ve built up to this in recent games, when the luck hasn’t really been on our side. But luck is something you get, and you build it up, and today we had three amazing goals in the first half, then another amazing goal [in the second]. We’ve been training really hard on these type of goals as well; it’s not just chance, it’s hard work behind it.”

Eriksson said that the Chelsea team were “simply not afraid” of any opposition. “We believe we are the best team in England,” she said. “We really believe that, and we know that we can compete with any team. We don’t come to a place like this and start dropping off and being afraid. We show our respect, but we have a huge belief.”

The Blues captain hailed Sam Kerr’s goal as being proof of the talent of Chelsea’s new signing. “But she’s also an amazing team player,” added Eriksson. “She works so hard for the team, defensively she wins the ball, she’s good in the air, she’s good at everything. She really deserved that goal – she’s had a couple of chances before, but we all told her: ‘Save it for Arsenal!'”

The captain said that the result against Arsenal could only be the springboard for a full assault on gaining the WSL title if Chelsea repeated the intensity of the performance in their remaining league matches.

“It will only be [the title] if we put in this type of performance in every single game; if we keep working hard every time. It’s not the big games that we’ve been struggling in,” she said, agreeing that the draw at Liverpool had been a prime example of what can happen to front-runners if they don’t turn in completely focused displays.

“But if we can carry on like this, I’m confident we’re going to come out on top of the league.”

Chelsea Women next play away at Charlton in the Women’s FA Cup on Sunday January 26 at 2pm.

Meanwhile, the Blues’ semi-final Conti Cup game against Manchester United Women has been confirmed as taking place on Wednesday January 29 at 7.30pm at Leigh Sports Village. Tickets £6 in advance (£3 in advance U16s/65+) from the Manchester United ticket office, 0161 868 8000.