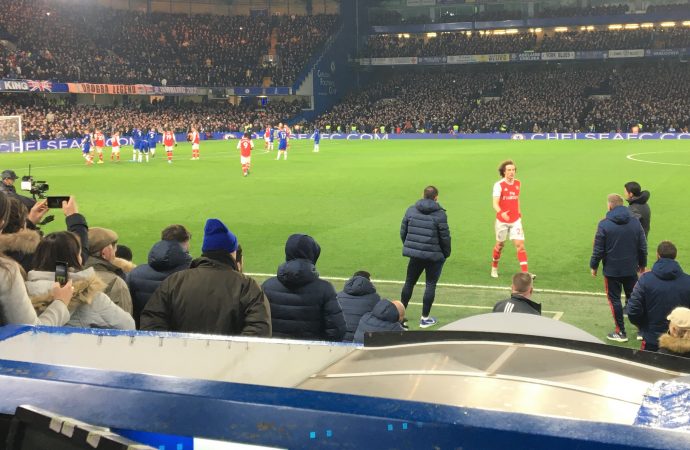 The pivotal moment in this tense, all-action London derby at the Bridge between Chelsea and Arsenal. David Luiz, in his first time back at his former home as a Gooner, is sent off with less than half an hour on the clock. His rash challenge on striker Tammy Abraham meant that ref Stuart Attwell showed

The pivotal moment in this tense, all-action London derby at the Bridge between Chelsea and Arsenal. David Luiz, in his first time back at his former home as a Gooner, is sent off with less than half an hour on the clock.

But as so often happens with Chelsea this season, there was no killer blow, no clinching goal, no glorious ending.

Instead, just as happened at St James’ Park days earlier, Chelsea conceded a late, late goal. In this case an excellent curling left-foot shot from Gunners captain Hector Bellerin, which beat the hit-and-miss Kepa and levelled the scores with barely three minutes of normal time remaining.

Despite being a man down for the lion’s share of this match, Arsenal twice came from behind. They levelled Jorginho’s penalty in the 64th minute… from a Chelsea corner! Willian took the corner kick, Arsenal cleared and broke forward, and Brazilian teenager Gabriel Martinelli raced ahead on the counter-charge.

All that stood in his way was N’Golo Kante, whose unfortunate slip on the skiddy surface allowed Martinelli to go one-on-one with Kepa, and beat the keeper. It was the Gooners’ first shot of the match.

Even at 1-1, Chelsea looked the likeliest to win. With Arsenal’s backs against the wall for so much of this game, it seemed only a matter of time before the Blues nicked the lead again.

It happened with six minutes remaining. Chelsea’s 14th corner of the game (a stat that reflects the dominance in possession) was a short one, to Callum Hudson-Odoi, whose fierce cross was flicked goalwards by Cesar Azpilicueta.

Chelsea thought they’d snatched the points just like they did at the Emirates at the end of December, but then Bellerin – making his first appearance since December 5, and exactly a year after the cruciate ligament tear that has caused him such trouble – fired home from outside the penalty area.

Frank Lampard was, yet again, left to lament Chelsea’s lack of killer instinct. It’s a complete mystery why such an able and creative team seems to clam up in front of goal, and simply resort to endless Morrie Sarri-style sideways passing and short exchanges which invariably end up being intercepted, rather than just firing in and making the net bulge.