Blues gear up for derby 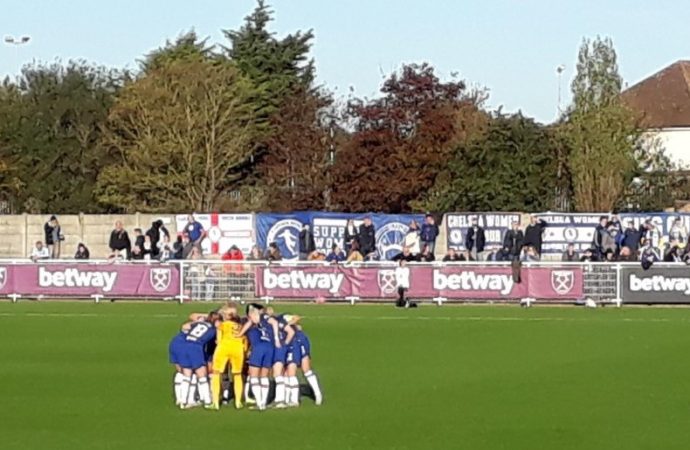 On paper, Sunday afternoon’s Chelsea Women v West Ham United Women clash should be a gilt-edged opportunity for the Blues to keep the pressure up at the top of the WSL. But Chelsea’s players have already had a tough week, including the FA Cup trip to Charlton on Sunday and the midweek trek to Manchester

On paper, Sunday afternoon’s Chelsea Women v West Ham United Women clash should be a gilt-edged opportunity for the Blues to keep the pressure up at the top of the WSL.

But Chelsea’s players have already had a tough week, including the FA Cup trip to Charlton on Sunday and the midweek trek to Manchester for the Conti Cup semi. West Ham, by contrast, have only had one match all week, at home.

Chelsea have overcome the Irons twice this season. Back in September, the Blues won 2-0 at Kingsmeadow in the Conti Cup, and in October Chelsea won 3-1 at Rush Green in the league (that’s the players above, pictured in their pre-match huddle).

However, this corresponding fixture ended in a 1-1 draw last season, when the teams met in March, so Emma Hayes isn’t counting any chickens.

Hayes has less ability to shuffle her pack than usual, with Sam Kerr and Ji So-Yun away on international duties, although nobody is entirely sure what role the Blues’ new Aussie striker is likely to play for the Matildas in the coming days. Kerr’s batch of games are Olympic qualifiers, but two of the matches are against Chinese teams, and confusion reigns about where – or indeed whether – the games will go ahead because of concerns about the coronavirus outbreak.

In Manchester Hayes used Beth England and Erin Cuthbert as twin strikers in a 4-4-2 formation, but she is expected to select Deanna Cooper and goalie Ann-Katrin Berger for the visit of the Hammers.

West Ham’s record in London derbies has been poor, with defeat in seven of their last eight clashes with other outfits in the capital since their first season in the FA Women’s Super League.

Chelsea come into Sunday’s fixture unbeaten in their last 18 WSL games since losing 3-2 away to Birmingham in January 2019. In that time the Blues have netted 58 goals while conceding just 13.

In the new batch of Opta stats, published ahead of this weekend’s league clashes, is one telling line which Hayes aims to exploit. Since keeping back-to-back clean sheets on the road in December 2018, West Ham have failed to record a shutout in their last nine FA Women’s Super League away trips.

“It’s the third game in a week, so recovery is key for the players,” said Hayes. “The league is something we are chasing, so we need to get everyone fresh and hope that one or two [players with] knocks recover in time.”

She knows West Ham can be tricky customers, and that they know how to set up against Chelsea as they have ex-Blue Gilly Flaherty in their ranks. She captained the team in their weekend FA Cup defeat to Arsenal.

‘West Ham have proven to be a difficult side for us,” said Hayes. “It is a London derby, they are stubborn, create chances and have always played well against us, so we don’t underestimate them, but our confidence is in a good place and when you are winning games away, it only adds to the confidence of the group.”

The last quarter-hour of the game will be critical. West Ham have conceded eight goals in the final 15 minutes of Barclays FA Women’s Super League action this season; the joint-most of any side (Brighton have also let in eight late in the day). In fact, five of the last eight goals that the Irons have let in have been in the 76th minute or later.