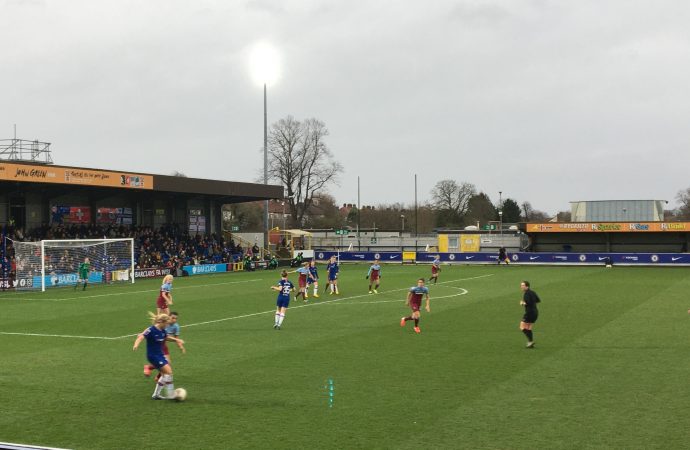 Chelsea didn’t so much blow West Ham away as annihilate them. Eight goals were hammered home against the Hammers, with none in reply, and it could have been worse for the Irons in this dramatic east/west clash. Not that the afternoon’s visitors to Kingsmeadow were bad or sloppy or careless. Chelsea Women were simply superb

Chelsea didn’t so much blow West Ham away as annihilate them. Eight goals were hammered home against the Hammers, with none in reply, and it could have been worse for the Irons in this dramatic east/west clash.

Not that the afternoon’s visitors to Kingsmeadow were bad or sloppy or careless. Chelsea Women were simply superb in every department. There wasn’t a single weak link, the attacks were beautifully crafted and executed, the defence was watertight and the teamwork surpassed anything that manager Emma Hayes has called for.

This was a Sunday afternoon when everything she’d been drilling into her squad came together in as perfect a display as any of the 3,304 lucky enough to witness it will remember for a long time.

Bolstered by a back line of Hannah Blundell, Millie Bright, captain Magda Eriksson and Jonna Andersson, the goal was minded by Carly Telford, who was given another chance between the sticks as Ann-Katrin Berger, who was listed on the bench, had recently had a pain-killing injection in her knee.

Hayes began with an attacking 4-1-3-2 formation, with Beth England and Erin Cuthbert the twin strikers, serviced by a formidable midfield of Maren Mjelde, Drew Spence (who is enjoying a new lease of life) and Guro Reiten.

Reiten is blossoming into not merely a great goal scorer, but a gifted provider. Tellingly when she and Sophie Ingle – the defence/midfield pivot – were subbed in the 67th minute, both nipped off, showered, changed and returned to watch the final act of this epic drama. It underlined the togetherness of this fine Chelsea team.

West Ham are no mugs. Ex-Blues gaffer Matt Beard (who left Chelsea in 2012) had set up with three at the back, anchored by another former Blues star, Gilly Flaherty. The Irons had only played one game in the week leading up to Sunday (and it was at home), while Chelsea had already played twice… both away.

The corresponding fixture last season at Kingsmeadow ended in a 1-1 draw. Boy have things changed since then.

Seven minutes after Chelsea kicked off they were ahead. Erin Cuthbert’s corner (the first of the game) was headed out by the Irons’ defence, headed back in by Bright, and fell kindly to Mjelde, who wellyed home.

Five minutes later it was 2-0 as Beth England, played through by a superb assist ball from Cuthbert, took advantage of keeper Courtney Brosnan slipping, rounded her and slid the ball home.

Attack after attack followed, with Flaherty earning a booking for one desperate attempt to deny Cuthbert, before Reiten sent across Chelsea’s third corner of the match, just before the interval, and the tall, majestic figure of Ingle rose and nodded home. It was 3-0 at half-time, and the Chelsea fans had silenced the knot of opposition supporters.

“Are you watching Phil Neville?” chanted the Blues ultras, although he wasn’t present. Instead, former Chelsea striker Tore Andre Flo was in the stand with his missus and daughter, to enjoy the spectacle.

The Irons began racking up the bookings – with Kate Longhurst seeing yellow for a nasty lunge on Reiten – before Cuthbert controlled the ball and fired past Brosnan from 25 yards… a peach.

It then became 5-0 after 56 minutes, following the bizarre booking of manager Beard for berating ref Amy Fearn, in frustration, from the dugout. Things were disintegrating for the Hammers.

A Cuthbert corner looped into the area, and England got her second – a simple header as she stood waiting, and virtually unmarked.

On 61 minutes it was 6-0; Andersson racing to the byeline and crossing when the ball seemed to have outpaced her. Mjelde raced in ahead of the keeper and clipped it home for her second.

With Jess Carter, Ramona Bachmann and Emily Murphy on for Ingle, Retien and England respectively, a new freshness and urgency could be sensed. With two minutes remaining, Bachmann got a goal that her determination deserved, weaving past defenders and burying the ball in the net.

To round off a memorable afternoon, Murphy got her first league goal; the 16-year-old rising impressively to head home the ball after linking up with both of her fellow subs.

When the three added minutes of stoppage time had ended and the ref had blown her whistle to end the slaughter, the electronic scoreboard read 8-0. Several of the West Ham girls were in tears at the end; they had simply been overrun.

Free-scoring Chelsea, who pumped four past Arsenal two weeks ago at Meadow Park, are now eyeing up the fixtures ahead. February involves two away trips to Manchester – first to play United, then to play City.

Hayes is keeping strictly to her game-at-a-time regime, but even she allowed herself a satisfied smile at the end of this dazzling display of co-ordinated, magnificent attacking football.

The next critical date for home fans is when Birmingham City visit Kingsmeadow on Wednesday February 12. After this result – Chelsea’s biggest of the season, and a welcome boost to goal difference – the Brummies will approach with trepidation. 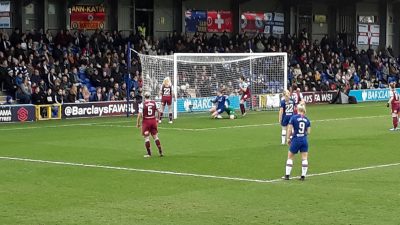