We were relentless: Hayes 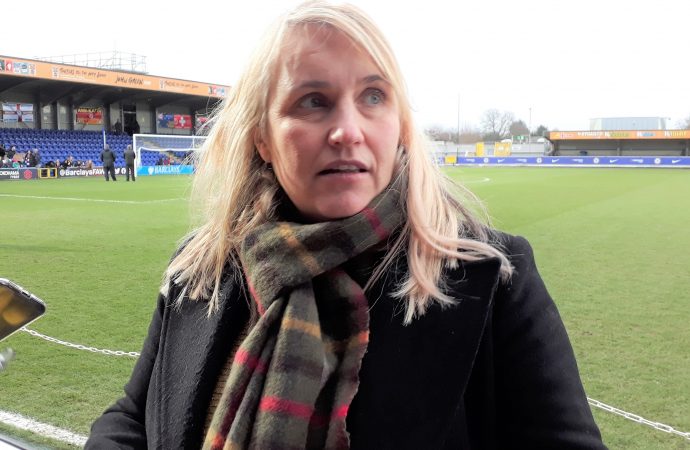 It’s hard to imagine two more starkly contrasting reactions after the Blues’ 8-0 win over the Hammers at the weekend. Chelsea Women’s manager Emma Hayes was fighting the urge to grin like a Cheshire cat, while her predecessor, West Ham coach Matt Beard, looked like he’d lost a winning lottery ticket. But it’s not in

It’s hard to imagine two more starkly contrasting reactions after the Blues’ 8-0 win over the Hammers at the weekend. Chelsea Women’s manager Emma Hayes was fighting the urge to grin like a Cheshire cat, while her predecessor, West Ham coach Matt Beard, looked like he’d lost a winning lottery ticket.

But it’s not in Hayes’ nature to be triumphalist. She knows that highs are followed by lows, and a year after her side were trounced 5-0 at home by Arsenal, she still feels that pain.

So she maintained her customary measured outlook in her post-match press interview following Sunday’s overwhelming win against London rivals West Ham – a side, to be fair, that was missing first-teamers Adriana Leon and Cho So-hyun (away at Olympic qualifiers) and the injured Martha Thomas.

Without the depth of squad that Chelsea enjoy, Beard’s players couldn’t find a way to get the ball off the Blues, never mind control the game.

Perhaps he made a tactical error to start the game with only three at the back. After all, the Irons were always going to struggle to cope with lightning wingers in Hannah Blundell, Maren Mjelde and the zippy Jonna Andersson and their telling crosses, while the claret-and-blue midfield was too often brushed aside.

But Hayes believes that her Chelsea team, playing the way it did on Sunday at Kingsmeadow, could have beaten pretty much anyone… and in style.

“It was a relentless performance from the team from the very start; I thought that the way we began the game was what I’d asked for,” she said, revealing that her number-crunchers in the Chelsea dugout had calculated that the Blues had achieved a 37.5% shot-to-goal conversion rate in the first half alone!

She is particularly pleased with the side’s evolution; standards are improving every week, and players are successfully adapting all the time. “It doesn’t matter who they are; they’re coming into the team and doing the jobs that are asked of them, and performing at a level every week that’s improving,” she said. “No one player is safe in this team! You have to produce a performance to get in it, and that’s the big message for me from the squad today; that performance matters.”

Hayes agreed that with such a superior all-round show from every Chelsea player, singling out individuals for special praise was unfair. She might just as well have recited the teamsheet.

“It’s what you want. I don’t want to talk about individuals. The fact that everyone’s willing to do something – everything – for each other is one of the hardest things to achieve within the team.

“The fact that the team are challenging each other to provide higher levels every week shows that they buy into the concept of the team. It’s selfless. Everybody performed well today, including the bench.”

She continued: “Everybody enjoys what we’re doing and how we’re doing it, and I think that’s when the magic starts to happen. As we get to the business end of the season, our team are finding higher levels technically, tactically, physically, emotionally, and I’m very pleased.”

Asked to comment specifically on her Swiss striker’s return to scoring ways, she said: “I’m happy for Ramona [Bachmann, who scored the 7th goal with a superb individual effort]. It’s such a relief for her. There’s real pressure as a striker when you don’t score. Hopefully now she’ll kick on and score more goals during the rest of the season. Her contributions could be vital for this team in the run-in [to the end of the season].”

Asked whether Bachmann and Kerr could be a good front partnership, Hayes said: “Everything’s possible. It’s possible for me and Kerr to play in the team together at this rate!”

For Matt Beard, there was nothing but gloom. Several of his players were in tears after the final whistle as a shell-shocked huddle of claret and blue formed in the middle of the pitch. “We’re embarrassed with the scoreline,” he said. “We shouldn’t be getting beat that way at this level, but you see the top three – Chelsea, Arsenal and Manchester City – do this to a lot of teams.

“The resources and the players they’ve got, and the players they brought off the bench when they were in complete control of the game, it’s frustrating. We shouldn’t be getting beat that way. We’ve got better players than the scoreline suggests, and what our performance today suggests.”

It doesn’t get any easier for Beard and the Irons. Next Sunday they face Man City.