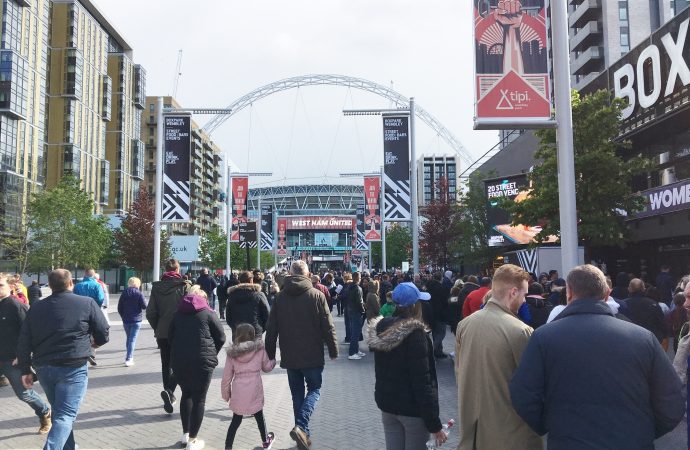 It defies logic, but it is what it is! This year’s Continental Tyres League Cup final between Chelsea and Arsenal is being staged in Nottingham.

On a smaller scale, it’s a repeat of the situation in 2019 when the Europa League final, also fought between Chelsea and Arsenal, was staged in Baku, Azerbaijan, forcing fans to make an absurd journey.

Blues manager Emma Hayes rolled her eyes when asked what she made of two London teams, all their staff and all the fans having to traipse on a 300-mile round trip up and down the M1 for a game that – frankly – should be played at Wembley, such is the passion for women’s football in the capital.

The world of women’s football has changed dramatically in the eight years of the tournament’s existence. During that time, attendance at the final has ranged from a low of 2,136 (when Arsenal beat Man City in 2018) to a high of 5,028 when Arsenal beat Notts County in 2015.

This year, however, with two of the three top teams in England fighting for a trophy the Blues have never won, and interest rocketing in the women’s game, there are likely to be between 25,000+ at the match. The City Ground – home to Nottingham Forest – theoretically holds 30,000, if everyone squeezes up.

In fact, the highest attendance there this season has been 29,314 for the grudge game against rivals Derby County.

But when we’re all supposed to be saving the planet and reducing needless travel, isn’t there an argument – when two teams from the same city qualify for a final – for rethinking the venue, even late in the day? If Arsenal and Chelsea play at Wembley, it becomes an affordable Oyster card outing.

“At least there’s a pitch we can play on,” said Hayes, unable to disguise her anger that two more WSL fixtures were called off on Sunday (Liverpool v Birmingham City and Spurs v Bristol City) because of waterlogged pitches in what has been an incredibly mild winter so far.

“If the game was to have been played in the north west, I doubt we’d ever get a game of football on,” she said, referencing her earlier criticism of Tranmere Rovers’ Prenton Park pitch, where the Blues played out a 1-1 draw against Liverpool in mud which could have served as the film set to a scene from the Bafta-winning film 1917.

“If you’re going to have these cup competitions, we should probably mirror the men’s game and keep them both [League Cup and FA Cup] at Wembley,” she said. “I think it should be thought about. It’s tricky, because to sell those games you have to think about it well in advance, not knowing the finalists.

“I don’t know what the solution is, or whether Wembley would be a plausible option, or whether there’d be a market for it, like the FA Cup.

“But it does seem silly that two London teams are having to go up to Nottingham.”

Hayes does, however, have sympathy for the forward planners who have to ensure that a venue is found and early arrangements made – a task usually undertaken months, if not years, in advance.

“I don’t blame the FA,” she stressed, adding that it was important for all sides to work together to find a solution to an issue that will, as we near the final on the last day of the month, grow more and more irritating, expensive and climate-affecting for London fans.