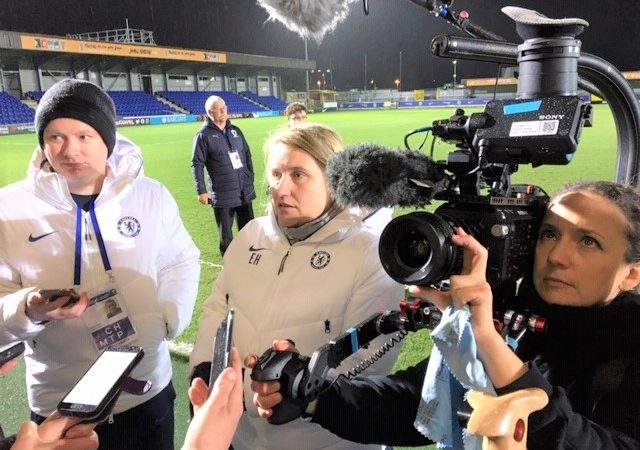 The games that you think are going to be easiest to win seldom are. Such was the case under the floodlights, two days before Valentine’s Day, when Birmingham City visited with grit and determination, rather than roses and chocolates. Why City are languishing in the lower reaches of the WSL table is mystifying, based on

The games that you think are going to be easiest to win seldom are. Such was the case under the floodlights, two days before Valentine’s Day, when Birmingham City visited with grit and determination, rather than roses and chocolates.

Why City are languishing in the lower reaches of the WSL table is mystifying, based on the Kingsmeadow clash on Wednesday night.

Chelsea ground out a victory, and yet this was the identical starting line-up as the one that trounced West Ham 8-0. Sophie Ingle, the pivotal player who has such a key role between defence and midfield, blamed the lack of football, thanks to the cancellation – three hours before kick-off – of Sunday’s scheduled game up in Manchester.

But the real reason for (especially) an unconvincing and frustrating first half of football against Birmingham (pictured below, warming up) was the skill and doggedness of a team fighting for their league survival, and – as a consequence – matching the Blues ever step of the way.

Only a late Guro Reiten goal from two yards out gave Chelsea the crucial lead going into the break. And, with maestro Emma Hayes’ tweaks at the interval, notably giving Maren Mjelde a freer role in the second half, a second clinching goal made sure of the points.

City closed Chelsea down at every opportunity in the first half, with close marking and a high press giving the forwards few opportunities, despite having the lion’s share of possession.

But the Blues kept trying, even if they couldn’t make their corner kicks count. As the fourth official was getting ready to signal that there was one additional minute of playing time at the end of the first half, Chelsea finally made the breakthrough.

In a frantic last minute of official time, a Mjelde shot was charged down in the Birmingham area, a Beth England floated shot was comfortably held by Hannah Hampton in the Birmingham goal, and then – right at the death – the crucial strike. Jonna Andersson, industrious as always down the left wing, sent a low cross into the area, Ingle flicked it on for the second assist, and Reiten, in the six-yard box, facing the keeper, niftily switched feet and fired the ball into the net.

The relief was overwhelming, and Hayes’ half-time team talk altered in that instant. The second half would prove a more measured, controlled and professional 45 minutes of football.

Chelsea contained Birmingham, and – in the 58th minute – got the all-important second goal. Erin Cuthbert (who was to leave the pitch at the final whistle nursing a painfully bruised shoulder after colliding with the unyielding metal fence at the side) provided the through ball, and England was off like a whippet, controlling with each touch, outpacing the outriders and lobbing the ball over Hampton and into the onion bag.

It remained 2-0, the crowd – chilled and damp, but never silenced – roared their approval at Maria Thorisdottir making a return to the game as a late sub after a long absence, sang along to Chelsea, Chelsea over the tannoy, and gathered pitchside for selfies and autographs with a new spirit of joy.

Ji So-Yun, although she didn’t start or come on as a sub, is now back from international duties. She was formally presented with her framed shirt to mark 150 appearances for the club, and is expected to be back in the side for Sunday’s cup game against Liverpool at Kingsmeadow.

Interviewed after the match, with (above) the usual dozen mobiles shoved in her face and a camera on her shoulder, Hayes credited Birmingham with displaying the fighting spirit needed to survive in the league. “I thought the coach [Marta Tejedor] set the team up well for the first 45 minutes, but we countered it in the second half,” she said.

The reason, Hayes confirmed, that she had started with the same line-up as she’d used in the two previous games was because she had no Sam Kerr or Ji So-Yun to pick from, as both were away.

Kerr returns from Sydney on Friday, but will not be chosen to play on Sunday as she’ll still be getting over the flight and the international matches.

However, she is expected to be in the side for the crucial match at Man City on February 23. 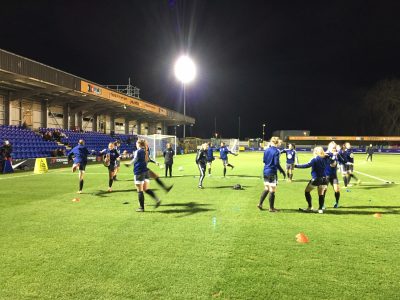