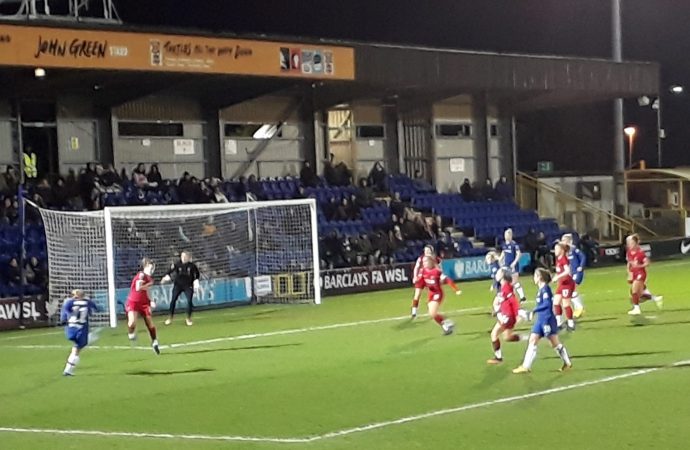 Chelsea Women have made it through to the quarter-finals of the FA cup thanks to a wonder volley from midfielder Guro Reiten, writes Jane Grove. The Norwegian international buried the ball in the back of Liverpool goalie Anke Preuss’ net in a first half which saw a resilient Red Devil side thwart a steady wave

Chelsea Women have made it through to the quarter-finals of the FA cup thanks to a wonder volley from midfielder Guro Reiten, writes Jane Grove.

The Norwegian international buried the ball in the back of Liverpool goalie Anke Preuss’ net in a first half which saw a resilient Red Devil side thwart a steady wave of blue.

But on 26 minutes a deft flick-on by former Liverpool player Sophie Ingle found the in-form Reiten who struck the ball home (pictured) with such force that it could have taken the keeper with it had she managed to get a hand to the ball.

The win (Chelsea’s ninth on the trot) sets up a tasty clash against Everton in the last eight. The Blues will travel to Walton Hall Park ­- the Toffeewomen’s new home ground – on Sunday, March 15.

Storm Dennis meant that the fifth round fixture was moved from Sunday to tonight (Monday).

Manager Emma Hayes, who was relieved the match wasn’t postponed until later on in the week, made just two changes to the side which beat Birmingham 2-0 at Kingsmeadow last Wednesday. Ann-Katrin Berger replaced Carly Telford in goal and Ji So-Yun, having returned from international duty with South Korea, came on for Drew Spence.

Chelsea were fast out of the blocks from the off, testing the Liverpool defence which took a beating but managed to repel the invaders.

On 15 minutes chinks began to appear in the Reds’ armour when Reiten found Cuthbert who went on a run, but the Scottish international’s goal-bound shot found the red wall.

Reiten again was involved in the next assault teeing up Ji whose low drive was saved by the keeper, then again when she had her shot cleared off the line from a Maren Mjelde assist.

But it was fourth time lucky for the 25-year-old who signed for Chelsea last May. Her left-footed volley minutes later gave Chelsea a much deserved lead.

The Blues started the second half in the same vein as the first with Cuthbert going close on the hour mark after she turned a defender and forced a brilliant save from Preuss.

With 15 minutes remaining and wanting to get the clincher, Emma Hayes brought Sam Kerr and Drew Spence into the fray for Ji and Blundell.

But Liverpool had other ideas and twice went close on the counter forcing Berger into action – once from striker Niamh Charles who almost found a late equaliser. Fortunately Chelsea’s number 30 was more than equal to the task, keeping a clean sheet and securing the coach ride up the M6.

This Sunday, the Blues will be heading north along the same stretch of tarmac for their top-of-the-table clash against rivals Manchester City in a crunch game which could determine the WSL title. 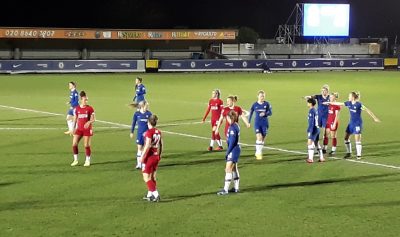