It’s time to nail the jinx 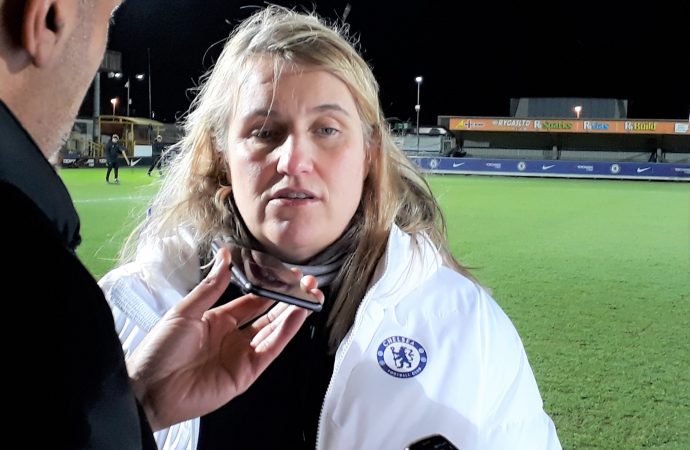 Chelsea manager Emma Hayes is relishing this weekend’s crunch game up at Manchester City’s Academy stadium, with both Ji So-Yun and Sam Kerr back in the reckoning for starting places. It is, she feels, time to end a strange jinx that has plagued the Blues for years as – remarkably – Chelsea have never managed

Chelsea manager Emma Hayes is relishing this weekend’s crunch game up at Manchester City’s Academy stadium, with both Ji So-Yun and Sam Kerr back in the reckoning for starting places.

It is, she feels, time to end a strange jinx that has plagued the Blues for years as – remarkably – Chelsea have never managed to beat Manchester City in the Women’s Super League on their home turf.

“With my players now back from Olympic duties, I think I’ll have a fully fit squad [to choose from],” she said.

Asked how she was planning to prepare for the Man City v Chelsea clash, she insisted that she would be doing nothing special or out of the ordinary. “I’ll prepare exactly how I prepared for this [Liverpool] game; just recover, get the tactical information right, watch the players train and then get up to Manchester and do what we do best… which is perform on the pitch.”

After the Blues kept another clean sheet against Liverpool in the FA Cup clash at Kingsmeadow on Monday night, Hayes has renewed confidence in her defence to perform well at Manchester.

She also feels Guro Reiten, who scored the crucial winner on Monday, is getting better all the time, and has become a key component of the Chelsea Women’s side.

“Guro’s confidence inside the penalty box is improving with every game,” she said. “Every time she gets a good opportunity in a game, she looks like she’s going to score.”

Four of the last five FA Women’s Super League meetings between Manchester City and Chelsea have ended level, though the Blues ran out 2-1 winners in the reverse fixture earlier this season.

And yet, Chelsea have never won away from home against Manchester City in the WSL, having drawn three of their previous clashes at the Academy stadium, and lost three.

But Chelsea are the in-form side, having taken a league high 34 points from the last 36 available in the WSL, winning 11 of their last 12 games.

Only current Manchester City players Jill Scott (141) and Gemma Bonner (139) have played in more WSL matches than defender Steph Houghton (138), so City have the most experience of the two teams.

Last time out, against Birmingham, Chelsea striker Beth England scored in her eighth straight Barclays FA WSL match (now standing at 11 goals), setting a new record in the competition for consecutive scoring appearances by a player.

So she’s one of the favourites to score the 2,000th goal in WSL history this weekend. Currently the tally stands at 1,992 goals.

Because of weather-enforced postponements, women’s football is using this weekend to come together to support the Heads Up campaign.

Support from Barclays FA Women’s Super League, FA Women’s Championship and The FA Women’s National League clubs was initially scheduled for Sunday February 9, but because of postponements it has been rescheduled for this weekend’s fixtures.

Spearheaded by Prince William, the season-long Heads Up campaign aims to harness the influence and popularity of football to make conversation around mental health a normal thing, working closely with charity partners Mind, CALM and Sporting Chance.