We have to win to shut up Emma! 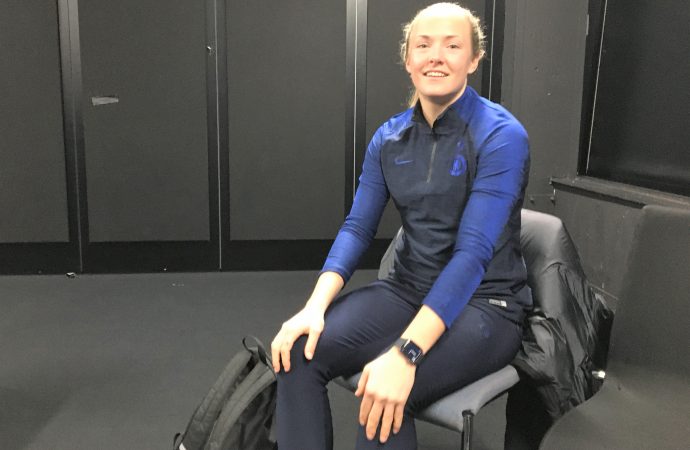 Chelsea have to win the Conti Cup this weekend to stop manager Emma Hayes wittering on about it, says the Blues captain with a grin. “It’s been our mantra for the whole year – winning the Continental Cup,” said Magda Eriksson ahead of Saturday’s final against Arsenal. “We’ve been talking about it all year! We’ve

Chelsea have to win the Conti Cup this weekend to stop manager Emma Hayes wittering on about it, says the Blues captain with a grin.

She revealed that the players had now heard the ‘We’ve never won it’ line so often from Emma Hayes that they were determined to win the trophy, just to get a break from the constant nagging!

Eriksson said that, as someone who has only been at Chelsea for two seasons, she hadn’t perhaps fully appreciated the significance of the fact that in eight years the club hasn’t had a say in the Women’s League Cup… but she does understand her manager’s frustration at failing to lift the only piece of domestic silverware that has so far eluded her.

“I don’t feel it in the same way, because I haven’t been here long enough, but I know it’s extra special for Emma. Now we’ve finally got to the final we just have to make the most of it.”

She said that it was great that so many of the Blues’ younger players had stepped up to the plate in the earlier rounds of the Conti Cup. “Everyone has done well, everyone has contributed to the reason we’re in the final. [Although] it becomes a different story once we’re in the final, it’s important that everyone feels that they’ve played a huge part in us being in the final.”

It’s one of the strangest statistics in women’s football, that in the eight-year history of the FA Women’s League Cup, only two teams – Arsenal and Manchester City – have ever won the tournament (the Gunners five times, the Citizens three).

Perhaps even more surprising, Chelsea have never even reached the final in all that time. One reason has been Hayes’ past dismissal of the tournament as a distraction and an irritation; it gets in the way of her vision of keeping weekends sacred for league football.

Hayes has always said that midweek is the place for league cup ties, when managers can give their squad players and younger rising stars a chance to shine. However, not all teams have the depth of squad that Chelsea enjoy, so until every women’s team in the WSL has the same resources and player numbers, it will continue to eat into weekends.

Eriksson is determined to break the Arsenal/City duopoly this time round as the Chelsea Women FC team head up to Nottingham for their last preparations before the 5.30pm final on Saturday, live on BT.

One thing certain to be beaten is the attendance record for a Women’s League Cup final. That currently stands at 5,028, but with two giants of the women’s game, Arsenal and Chelsea, going head to head, and with the ever-growing supporter base for both clubs, a new record seems certain to be set.

Looking back to last weekend’s extraordinary 3-3 draw against Manchester City at the Academy stadium, Eriksson says that she agrees that the Blues’ defensive display was below the expected standard, and accepts manager Emma Hayes’ disappointment at the performance of a back line of which Eriksson is a key component.

“If we concede three goals in a game, I don’t think any of us are happy with that; so we’re all on board with that. We want to keep clean sheets, we’re used to keeping clean sheets… we don’t concede, we don’t give away chances,” said the Swedish international.

“When a game comes along like Sunday’s game, it’s different, and it’s something we will address, and we will discuss this week, leading up to the [Conti Cup] final.”

She feels, however, that some perspective is needed as Chelsea were playing a City team that is in many ways the equal to the Blues in every position on the pitch.

Eriksson is realistic enough to know that in the ebb and flow of football, even great teams can have a bad day at the office. “I think for us it’s important to realise that it can be a one-off; these things can happen. As the game turned out, it was a mad transitional crazy game.

“For us, it’s important not to stress about it. We’re still a good defensive team, so it’s now about not making it a habit, and keeping it as a one-off.”

Chelsea were regularly outflanked by City’s speedy wingers at the Academy last weekend, and that’s something Eriksson, and Hayes, are determined to address.

“We’ll be really on that [at Nottingham], but you have to give credit to Manchester City [last Sunday]; some of their players were really ‘on it’ – Lauren Hemp was fantastic; she really shows her qualities on the bigger stage too, which is cool, because she’s so young,” said Eriksson, agreeing that she couldn’t think of another Chelsea Women’s game this season where the Blues defence was regularly outrun at the margins.

“We have to stay humble; we played a really good team on Sunday, and we can’t take that away from them. It doesn’t mean that we’re not good; it’s just that they made it difficult for us, the game could have gone either way… we were close to winning the game, so it’s about staying calm, trusting the process, believing in ourselves as well and just getting ready for Saturday.”

Does the 26-year-old Chelsea captain – who has already made 59 appearances for Sweden on top of her 45 for the Blues – believe that City is a better team than the Arsenal they will face in the Conti Cup final?

She knows that while last weekend’s astonishing 3-3 end-to-end, all-action draw at City was a glorious rollercoaster ride for supporters of both City and Chelsea, and for neutrals, it was a different match to look back on as one of the back four at the heart of it.

“Everyone I’ve spoken to has been like ‘What an amazing game!’, but I’m a defender, so I’m like ‘No!’ I like structure and control, so I would have wanted it to be more controlled, but I mean it was a really good game of football. Both teams went for it; both teams tried to be in front, and that’s when it gets really transitional. You would expect that in a game of this importance.

“I’m happy we could entertain people, I’m happy that we were able to show the best side of women’s football, but I would have wanted to get out of there with a win.”

Will Arsenal be fresher coming into the cup final? “We’ve had a week to recover, and that’s plenty of time,” said Eriksson. “We’ll all be fresh on Saturday; that’s not an issue. For me personally, I enjoy being in the flow of the game, and playing tough matches on a regular basis. That’s when I’m at my best. That’s how I try to look at it; I’ve just come off a really good game, and I’m ready for another really good game!”

She said that Chelsea will not be expecting the easy ride the Blues were given when they visited Arsenal at Boreham Wood on January 19 and won 1-4, including finding themselves 3-0 ahead after 22 minutes. “That was a one-off game where things went our way for the first 20 minutes. We’re not expecting anything like that on Saturday; they’ll be extra hungry, it’ll be really tight, we’ll have to earn all our chances.”

But she also knows how heavy home defeat feels (after the pain of Chelsea’s 5-0 thrashing at Kingsmeadow by Arsenal in October 2018). “Now we can put that to bed; it was one and a half years ago. You have those one-offs, but now you can see [after the Man City 3-3 result] that games against the top sides are really narrow, and it comes down to small details.”