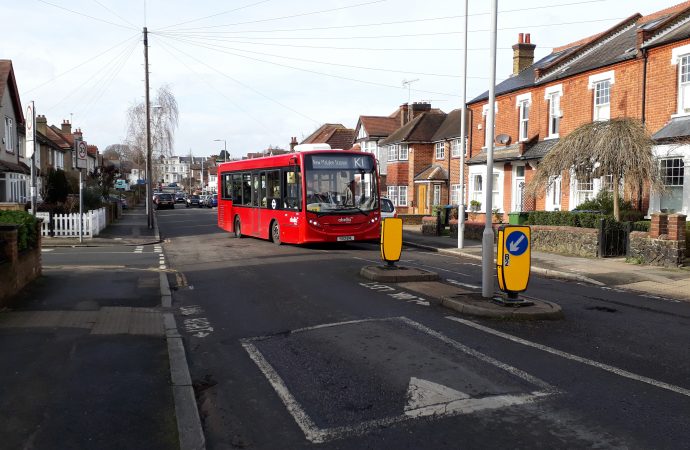 The council is threatening to install another of its hated bus-only barriers in a Surbiton street, although it could create scores of rat-runs down narrow residential roads. “I’m completely shocked, that’s my view on it, whatever next!” said a stunned resident of Thornhill Road as The Good Life informed her that Kingston Council was thinking

The council is threatening to install another of its hated bus-only barriers in a Surbiton street, although it could create scores of rat-runs down narrow residential roads.

“I’m completely shocked, that’s my view on it, whatever next!” said a stunned resident of Thornhill Road as The Good Life informed her that Kingston Council was thinking of installing a bus gate near her home.

“No one has told us. We haven’t heard anything. I think they should tell us if they are thinking of putting something like this in.”

The council is proposing to install a bus gate in the residential road which links Hook Road and Red Lion Road. The gate would allow the K1 to pass but stop other vehicles driving up Thornhill Road towards Hook Road. The restriction would be enforced by CCTV which could net the council hundreds of pounds in fines.

The last bus-only barrier was in Surbiton Crescent, near Surbiton High School. Inadequately signed, it filled the council coffers with more than £5million in fines from drivers – but is now considered a major public relations disaster.

However drivers taking the shortcut off the A3 to join the Hook Road via Fullers Way North, are likely to take the next available option – Thornhill Road.

Cllr Anita Schaper or Berrylands Ward was hugely concerned that if the bus gate was sited near the Ellerton Road junction as proposed, it would force drivers to divert down Douglas Road past Tolworth Junior School.

“I have actually got some really, really serious concerns,” she told the committee. “I don’t use this word lightly, that this is a catastrophe in the making.

“This is a real safety concern for those children using Douglas Road. What you are really creating other than healthy streets is a catastrophe of safety for these children walking up and down Douglas Road and the adjoining roads.”

She said the bus gate would create new rat runs, especially at the narrow bottle neck at the Douglas Road/Dennan Road junction where many children cluster to cross the road.

“I think it would just push danger and risk on to the very children we are trying to protect going to school. I don’t think this is thought through.”

Cllr Hilary Gander, portfolio holder for environment and sustainable transport, suggested the bus gate could be moved to the other end of Thornhill Road so drivers turning off Red Lion Road would be confronted by it before they came to Douglas Road.

The Surbiton Neighbourhood Committee resolved that the bus gate scheme would be trialled possibly with a new location along Thornhill Road after the impact of the likely traffic on the Douglas Road area had been assessed by highways officers and councillors.

After the committee meeting, Cllr Gander explained that a letter will be delivered to residents informing them of the resolution and ask them if they want to be a part of the monitoring group which will be formed from residents and councillors.

“We need both measures, the Tolworth Road modal filter and the Thornhill bus gate, in together to see the impact, good or adverse. Residents, whether they’re part of the monitoring group or not, will be able to feed back before we make the measures permanent,” she added.