We’re up for the cup 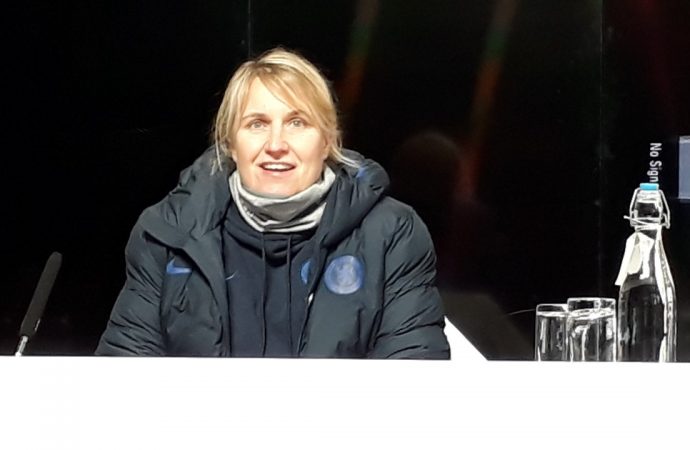 As Emma Hayes prepares to lead her team into battle against Arsenal in the first showpiece cup final of the season, the Chelsea manager has given her players the best possible chance of lifting the one piece of domestic silverware the club has yet to win. “This is Arsenal’s trophy!” said Hayes, pointing to the

As Emma Hayes prepares to lead her team into battle against Arsenal in the first showpiece cup final of the season, the Chelsea manager has given her players the best possible chance of lifting the one piece of domestic silverware the club has yet to win.

“This is Arsenal’s trophy!” said Hayes, pointing to the fact that the Gunners have won the FA Women’s League Cup five times out of eight. “This is the cup they’ve won the most in recent years; this is the one they won’t let go of easily.”

Chelsea play Arsenal up at Nottingham Forest’s City Ground at 5.30pm on Saturday. “I’ve got a fit and healthy squad going into the weekend,” she said. “I expect a fight. I expect Arsenal to defend their title with all their might.”

She feels it will be a much, much tougher game than Chelsea’s surprise 4-1 win at Arsenal Women’s Borehamwood home.

“It would be nice to go into the international break with a first trophy,” said Hayes, who said a couple of days before the match that she still didn’t know what her team would be.

Intriguingly, she spoke about the “freshness on the bench”, suggesting that there may be a start for at least one of the players who was a sub in the 3-3 draw up at City. For the record, that means: Carly Telford, Maria Thorisdottir, Hannah Blundell, Jess Carter, Adelina Engman, Ramona Bachmann or Drew Spence.

Up front, she’ll almost certainly choose the striking partnership of Beth England and Sam Kerr – a player who, Hayes feels, will take six months with the club to reach her very best.

However, the best guide to the likeliest team that Chelsea puts out is a repeat of the one that overwhelmed Arsenal last, on January 19. That side saw Ann-Katrin Berger in goal, a back four of Maren Mjelde, Millie Bright, Magda Eriksson and Jonna Andersson, with Sophie Ingle sitting just in front of them.

In midfield, Guro Reiten, Ji So-Yun and Erin Cuthbert. The only real question mark is whether Hannah Blundell swaps in for Mjelde, but otherwise a stable, positive and settled Chelsea line-up should take to the field.

Blundell came on in the 81st minute for Reiten in that match, but the right-back, who has just signed a two-year contract extension, could get the nod for the Conti Cup final.

“I don’t make decisions based on single poor performances,” insisted Hayes, when asked directly if Mjelde might give way for Blundell. “I’m blessed I have so much talent [available],” she said. “I just have to decide whether I want that freshness coming into the game.”

She continued: “It’s a trophy I haven’t had my hands on, but the Continental Cup? It’s a tournament I think more highly of, the longer it goes on.”

She is taking nothing for granted, and insists (asked about Kerr) that there are no ‘superstars’ in her squad, only team players. It’ll take a full-on team effort to wrest the trophy from Arsenal, and Chelsea Women are up for that fight.