Emma is tipped for top job 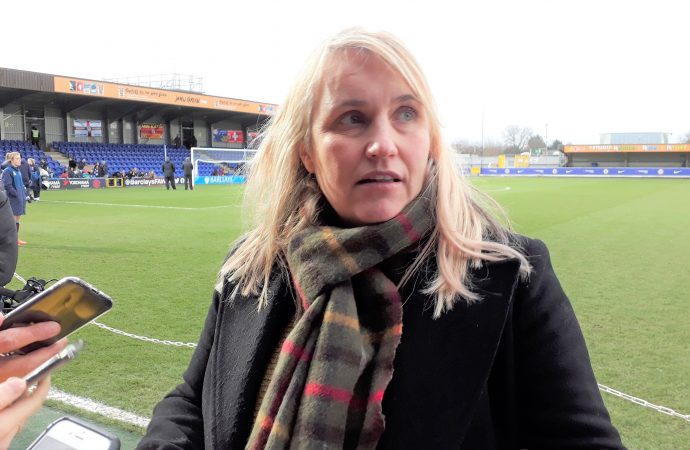 It’s news that fans of Chelsea Women will dread hearing… but Emma Hayes now seems likely to be offered the chance to take over as Lionesses manager this summer. Insiders say the Blues gaffer could be offered the post by the Football Association as early as next month (when an England training camp is scheduled,

It’s news that fans of Chelsea Women will dread hearing… but Emma Hayes now seems likely to be offered the chance to take over as Lionesses manager this summer.

Insiders say the Blues gaffer could be offered the post by the Football Association as early as next month (when an England training camp is scheduled, and before the current Women’s Super League season ends) following the side’s dismal showing in the United States, where standards fell well short as the women attempted to retain the SheBelieves trophy.

A 1-0 capitulation to Spain on Wednesday made it two defeats in three matches in the friendly tournament, but it’s the wider statistic – seven losses in the last 11 matches for Phil Neville – that is leading to a rethink at FA headquarters.

It’s precisely because of Chelsea Women’s success that Hayes is being linked with the managerial role. Having secured the Conti Cup in February, her team is in with a golden chance of landing the treble this season and – despite her undoubted loyalty to Kingsmeadow and the fans she praises as the best in the country – Hayes would then find the lure of the national job difficult to resist.

Winning Women’s League Cup, Women’s FA Cup and WSL would be a career high for Hayes, and may seem precisely the moment to contemplate moving on, especially as the FA would offer her a package worth £350,000 a year (with bonuses potentially taking that to beyond £500,000) as well as buying out her contract with Chelsea Women.

Neville himself has acknowledged that his position is under scrutiny after defeats to the USA and Spain in a competition which saw only one victory… a last-gasp 1-0 win over lowly Japan.

Until now, the FA had signalled that Neville’s position was secure as he has been in charge of choosing a combined Great Britain team for the Tokyo Olympics. But with the coronavirus pandemic threatening the Olympics’ very existence, there is a fresh chance to bring in a new England manager ahead of the UEFA Women’s Euros to be staged in England in July 2021, culminating in a Wembley final on August 1.

Neville’s highs during his two years in the job as national coach have been winning the 2019 SheBelieves trophy (thanks to a crucial 2-2 draw with the USA), then reaching the World Cup semis last summer. But it all seems to have gone pear-shaped since then, with the Lionesses actually going into reverse in terms of team development and confidence.

With interest in women’s club football rocketing, and likely to rise to a new crescendo in the summer of 2021, there are voices at the FA who question Neville’s capabilities. Some even ask if was right to have given such a key post to someone who had never held a senior managerial position before, when he was presented with the job back in January 2018.

Emma Hayes, by contrast, has a glittering track record, is a gifted communicator and analyst of the women’s game, and would be a popular choice to take charge. The Chelsea manager, who at 43 is just three months older than Neville, has another advantage; being female, she would be an inspiring figurehead for the burgeoning women’s game in England, not to mention having the advantage of being able to stroll into the team’s changing room whenever she chose… something that currently limits Neville’s wanderings.

The Lionesses’ 1-0 defeat by Spain, ranked well below them, would have been much heavier had it not been for the second-half heroics of Blues keeper Carly Telford, who took a hefty shot to the face on the hour, then made a second vital save in the 82nd minute.

But she was unable to do anything about Alexia Putellas’s powerful header a minute later. The only surprise was that dominant Spain’s goal took so long coming.

Chelsea’s Beth England watched the game from the touchline, wearing a ‘Rooney boot’ on her left ankle. Hayes says the injury, coupled with the fact that England won’t return to the UK from Texas until Friday, makes her a doubt for the Women’s FA Cup quarter-final against Everton on Sunday… a game now in doubt in any event as the government tightens restrictions on sporting gatherings.

“We’ll assess her when she gets home, and hopefully it won’t be too much of a problem,” she said, adding that the Friday return for Millie Bright, Carly Telford and England made it “a tall order to perform at the weekend”.

A big question over Phil Neville’s handling of the trio of SheBelieves games in the States has been his apparent reluctance to play Ellen White and Beth England together as paired-up strikers for the national team, particularly as England plays such a role week in, week out, for her club. “I think the country would, at some point, like to see those two together,” said Hayes.

All in all, the SheBelieves tournament was a major disappointment for the women’s game as a whole. Desultory attendances for every match bar USA games meant that as England kicked off against Spain there were 100 empty seats in the Dallas stadium for every paying spectator.

Had that match been played in England, the crowd would have been huge and hearty, instead of listless and silent. It killed the atmosphere. There is something unnerving about being able to hear every shout between players during a match, and it was a poor advert for women’s football.

“I think we need to take a step back now and start building the foundations again – getting back to the brilliant basics,” said manager Neville after the match.

The FA is weighing up whether that task should fall to him, or to a north London mother-of-one who appears to have the Midas touch.