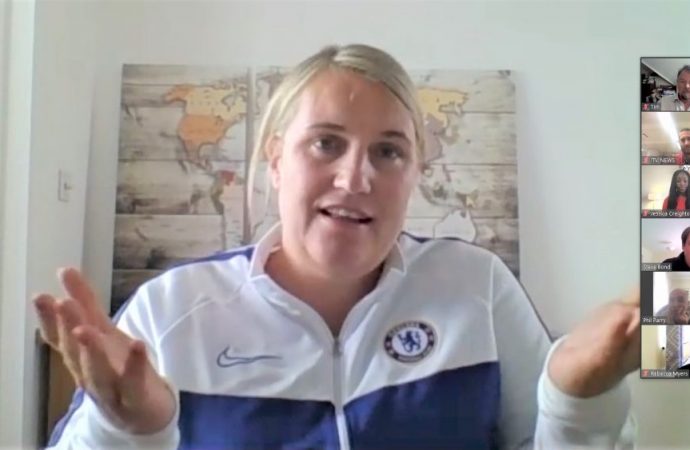 “We’ll roll with the new normal,” pledged Chelsea Women’s manager Emma Hayes, looking ahead to next season after the Blues were declared winners of the last. In an interview via Zoom, the 43-year-old said she was delighted that the FA had decided that “the most appropriate sporting outcome” of the abandoned Women’s Super League season

“We’ll roll with the new normal,” pledged Chelsea Women’s manager Emma Hayes, looking ahead to next season after the Blues were declared winners of the last.

In an interview via Zoom, the 43-year-old said she was delighted that the FA had decided that “the most appropriate sporting outcome” of the abandoned Women’s Super League season was to declare Chelsea the winners, based on a points-per-game formula.

The club’s £100,000 prize money is being donated to Refuge, the charity which works to help victims of domestic abuse.

Crucially, as well as having lifted the Conti Cup, the Blues will be back in European action after a year’s absence when the new season starts on September 5.

She said that she had celebrated the title win in her garden with her family. “It was low-key because my son woke me up at 5am!”

The decision not to resume the season, unlike the top-flight men who begin matches behind closed doors next week, gives women’s football extra time to work out new rules and routines for safe play and safe spectating in a very different landscape.

“I believe we’ll come back bigger, stronger and better,” said Hayes. “We’ll roll with the new normal; it may bring more broadcast opportunities. I feel optimistic.”

However she agreed that traditions such as players hugging fans after games at their Kingsmeadow home in Norbiton, and posing for close-up selfies, would have to end.

“I suspect there’s some truth in that… until there’s a vaccine,” she said. “The physical connections we all have will be put on hold for a period of time. My question to my team is ‘What will become the new normal?’ and how can we continue to interact and make sure we don’t lose the bond with our fans.”

For Chelsea Women, unbeaten in the league since January 2019, one bonus of the long interruption to football is that striker Fran Kirby, who turns 27 this month but hasn’t played since November last year because of the effects of a viral infection, is back in training.

She’ll be Chelsea’s secret weapon in September, says Hayes. “She’s in a great place; it’s safe to say she’s in the best place I’ve ever seen her, and she’s excited to be back in the team.”

During the Zoom interview, in which Hayes chatted for an hour from the living room of her north London home, she said that winning a seventh trophy in eight years with Chelsea was a source of great pride, and that she’d been personally congratulated by club owner Roman Abramovich.

She sympathised with rivals Manchester City (who were a point ahead of Chelsea, having played one game more, when the season was suspended for Covid-19) and Arsenal, both of whom had still nursed hopes of winning the title themselves.

“It was a collective decision,” she said. “I know what seasons feel like without winning trophies, and if [the FA] had decided on another order, we’d have accepted it.”

When the new season starts in September Hayes expects “an onslaught” from the other teams in the WSL, including Aston Villa Women, promoted from the Championship, with Liverpool Women being relegated.

She still doesn’t know how or when the league trophy will be presented to Chelsea Women. “It might be in July, when we return to the training ground, or maybe it’ll be taken round to each of the players’ homes!”

She said that now Chelsea’s Kingsmeadow stadium was entirely its own, as ground-sharing has ended, fans can expect to see changes to the rather dog-eared and neglected facilities. “You’ll see continued improvement at Kingsmeadow,” she promised.