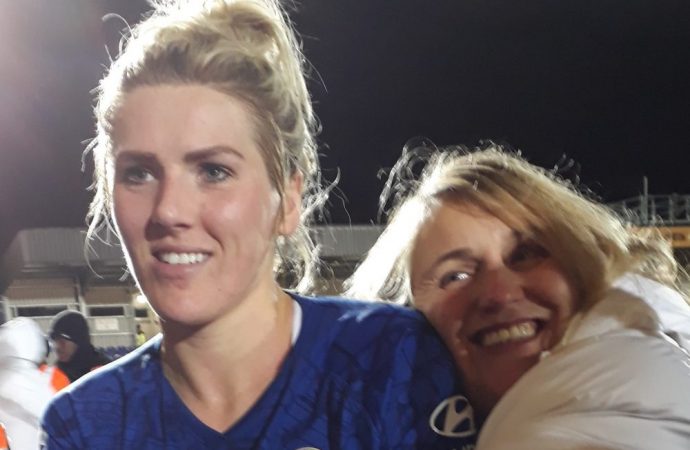 Millie Bright scored one of the best goals she’ll ever notch as Chelsea defeated Manchester City at Wembley in the curtain-raiser to the women’s football season. In an empty Wembley, the Blues lifted the Community Shield after a 2-0 win over arch-rivals City, who are still smarting at being denied the 2019-20 Women’s Super League

Millie Bright scored one of the best goals she’ll ever notch as Chelsea defeated Manchester City at Wembley in the curtain-raiser to the women’s football season.

In an empty Wembley, the Blues lifted the Community Shield after a 2-0 win over arch-rivals City, who are still smarting at being denied the 2019-20 Women’s Super League title, despite being top of the table when coronavirus struck.

It was the first Community Shield for the women’s game in 12 years, but it was a chance for both sides to blood new signings. In Chelsea Women’s case, that was Mel Leupolz, who started in midfield alongside Ji So-Yun and Sophie Ingle, and subs Jess Fleming and Niamh Charles, who came on late in the match.

Striker Sam Kerr missed a hatful of chances in a game notable for the return to fitness and form of Fran Kirby, an impressive showing by the newly blonde South Korean midfielder Ji and a strong goalkeeping display by Ann-Katrin Berger.

The Blues’ back four had a familiar look, despite the dislocated summer’s new squad additions, with Maren Mjelde, Bright, Magda Eriksson and Jonna Anderson in a line.

Playing in front of 90,000 empty seats, the first half was even and unspectacular, but the second half certainly livened up with City’s Jill Scott sent off for a second bookable offence – both cards for tackles that sent Ji sprawling. The first-half booking might have been harsh, but the second incident in the 62nd minute was a correct call by ref Becky Welch. Scott went in hard, caught Ji’s foot with her raised boot and then clattered her knees into the Chelsea midfielder’s back.

Bizarrely, there was no hope of VAR resolving any of the decisions, or the offsides. For some reason it was not in play for the women’s lunchtime game, but was used a couple of hours later when Liverpool and Arsenal men played out their Community Shield.

Four minutes after Scott walked off down the tunnel, Bright found space to unleash her exocet into the top corner of the net from 28 yards, over the flailing hands of Ellie Roebuck.

With Kerr and Kirby off, replaced by Erin Cuthbert and Beth England, the Blues were in control and a clincher from Cuthbert in stoppage time – reacting well to a rebound after England’s shot had been smothered following a good cross by Maren Mjelde – sealed the deal.

“Scoring at Wembley is unbelievable,” said Bright afterwards, acknowledging that she wouldn’t score many goals as beautiful as that in her entire playing career.

Cuthbert, a 50:50 chance to play after recovering from an injury, was also pleased. “I was so surprised when it went in,” she said of her welly into the roof of the net.

Manager Emma Hayes was pleased with her team’s performance and superior fitness. She refused to criticise Kerr, saying: “She runs into areas other people don’t want to go.” On the overall display, Hayes added: “I thought we took control of the game… and what a goal from Millie!”

What pleased her, above everything, was the chance creation. Carving out 18 scoring opportunities against a side as strong as City (even though so many were squandered) is an achievement in itself, and Kerr’s positioning in every case was precise, even if the final touch let her down.

Next up, the season’s start on Sunday September 6; Man Utd away.