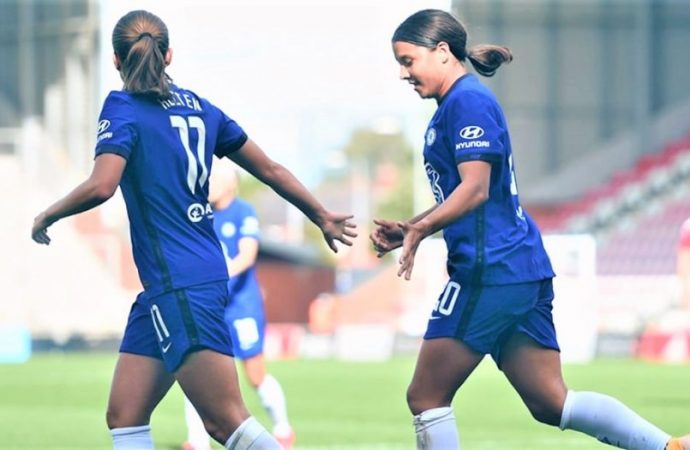 Guro Reiten slipped a congratulatory fingertip touch to Sam Kerr, right, after the Aussie striker put her frustrating Community Shield performance at Wembley behind her by notching Chelsea’s opening goal in the new WSL campaign. But Kerr’s first-half stike, away to Manchester United at Leigh Village on Sunday afternoon, wasn’t enough to clinch a win

Guro Reiten slipped a congratulatory fingertip touch to Sam Kerr, right, after the Aussie striker put her frustrating Community Shield performance at Wembley behind her by notching Chelsea’s opening goal in the new WSL campaign.

But Kerr’s first-half stike, away to Manchester United at Leigh Village on Sunday afternoon, wasn’t enough to clinch a win as the Blues immediately lost ground to their rivals Man City and Arsenal when United equalised late in the second half.

Despite that setback, which simply demonstrates how much tighter the women’s top-flight league has become, Reiten is positive as she looks ahead… and no wonder as Chelsea’s signing of the formidable Pernille Harder from Wolfsburg for a world-record £300,000 adds further firepower up front.

“Safe to say, looking around the division, the bar has been raised,” said the Norwegian forward, pointing also to World Cup star Rose Lavelle’s signing for Man City, and Arsenal’s acquisition of Australian Steph Catley, as evidence.

Reiten says that while winning the last season’s truncated Women’s Super League on a points-per-game calculation was satisfying, the hope is now “to repeat the trick in front of our fans”, once crowds are allowed back in to watch.

“We have such good attacking options at Chelsea, with Beth England, Sam Kerr, Erin Cuthbert, Fran Kirby, Niamh Charles, me… and now Pernille,” said Reiten. “The manager has some great choices to make. We all have different qualities, and I feel this team has a bit of everything.”

But Sunday’s draw at Manchester, in the third meeting between the sides in all competitions, means Chelsea now have to claw their way back into the title fight with victory next weekend over Bristol City, who visit Kingsmeadow.

“United are a good example of the quality beneath last season’s top three,” admitted Reiten, who was subbed for the new signing Harder with 10 minutes remaining after the Red Devils – against the run of play – equalised with barely 10 minutes remaining.

Even going to three at the back to gamble up front in the dying minutes, Chelsea couldn’t find the winner. Four minutes of stoppage time passed, but the clinching goal wouldn’t come and the Blues were again left to regret missed chances, with Kerr still not finding the accuracy and consistency that made her so deadly in both American and Australian leagues.

With 79 minutes gone, and Chelsea seemingly happy to settle for what would have been their third 1-0 win against United on the trot, Leah Galton produced a carbon copy of Kerr’s first-half strike to level.

Casey Stoney was, understandably, the happier of the two managers. Blues gaffer Emma Hayes said: “I’ll take the point, but I’m disappointed with us in front of goal. United were well-organised and difficult to break down, but we still had six chances to win the game. I’ll take the draw because it’s a long season and I think a lot of people will come here and have a tough game. I thought something was missing from our performance today, but I’ve got a great dressing room.”

So while dropping two points away is disappointing, Chelsea remain on a record 29-game unbeaten streak on the road in the Barclays FA Women’s Super League, a run stretching back to May 2017.