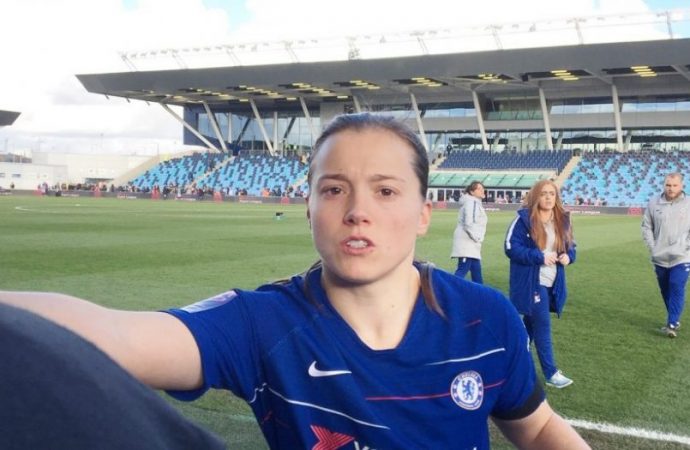 Mighty mouse Fran Kirby is on a mission. The Chelsea star, who stands a mere 5ft 2in (including studs) is playing like a woman possessed… determined to make up for the months lost to the medical condition that threatened her career. It was she, rather than the lofty Birmingham defenders, who soared like a Bonfire

Mighty mouse Fran Kirby is on a mission. The Chelsea star, who stands a mere 5ft 2in (including studs) is playing like a woman possessed… determined to make up for the months lost to the medical condition that threatened her career.

It was she, rather than the lofty Birmingham defenders, who soared like a Bonfire Night rocket to connect with Erin Cuthbert’s joyously pinpointed free kick and net the only goal to keep the Blues in touch near the top of the Women’s Super League at the weekend.

And it was she who came on as a sub just before the hour mark against Arsenal in the midweek Conti Cup clash at Kingsmeadow, to help cement a 4-1 victory as the Blues started their title defence with urgency and passion against the finalists they defeated last season.

Chelsea’s goals came from captain Magda Eriksson, Guro Reiten (two) and Beth England as the score climbed to an astonishing 3-1 in the space of 15 minutes of frantic end-to-end play before everyone caught their breath, with England’s late goal being the cherry on top.

It was a night that saw England youth international Niamh Charles make her full debut for the club, alongside Pernille Harder. The next Conti Cup fixture is on Wed Nov 4 against Spurs at Kingsmeadow, 7pm.

But, unexpectedly, this is turning into the season of her life for Chelsea’s No14, Fran Kirby – one of the most intense, focused deep-thinkers of the squad – as manager Emma Hayes sees her as a key player, every bit as vital to the team as her captain and confidante Magda Eriksson.

That the Blues ground out a 1-0 victory at sodden Damson Park on Sunday shows that life isn’t just going to be walkover wins this season, and underlines the importance of clean sheets.

“That was a good result and an all-round good performance,” said Hayes, who now has the little matter of Man City’s visit this weekend in, effectively, an early-season six-pointer.

Once again, Kirby will play a part. The win at Birmingham meant she’d started the first five of the Blues’ matches this season – something unthinkable a year ago as she battled the energy-sapping pericarditis infection.

“I’m delighted for Fran getting the goal, especially in the air,” said Hayes. “She gives everything to the side, no matter what I ask her to do, and she’s played a key part in the season’s start for us.”

If the Blues can contain City’s glamour squad, and if Kirby is at her impish best, Chelsea could top the WSL table on Monday.

The result at Birmingham went to form. Chelsea have now won seven of the teams’ last nine meetings in the WSL, although it’s a measure of how the Midlanders have improved that the corresponding fixture last season ended in a 0-6 thrashing for the home side.

More concerning for Birmingham Women is that they haven’t achieved a single goal against Chelsea in seven matches.

Buoyed by the midweek Conti Cup win against Arsenal, the Blues go into Sunday’s key WSL fixture on a 24-game unbeaten streak in the top flight.