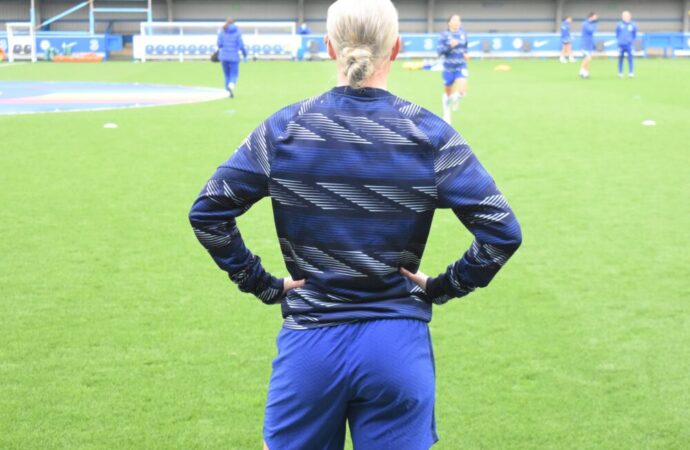 Chelsea Women scorched through the first leg of their Champions League opener against Benfica, finishing 5-0 winners ahead of the second leg at Kingsmeadow next week. It was a comprehensive performance, with the Blues handling defence-to-attack transitions with aplomb, keeping cool possession and making accurate passes under pressure, and turning their advantage into goals at

Chelsea Women scorched through the first leg of their Champions League opener against Benfica, finishing 5-0 winners ahead of the second leg at Kingsmeadow next week.

It was a comprehensive performance, with the Blues handling defence-to-attack transitions with aplomb, keeping cool possession and making accurate passes under pressure, and turning their advantage into goals at every opportunity.

Although the rejuvenated Fran Kirby caught the eye with a well-taken brace (the first after a minute and a half), it was the energy, effort of Beth England (above) that really impressed. The fact that her scored a goal in the second half – Chelsea’s fifth of an eventful afternoon – was fitting reward for an excellent display.

Pernille Harder, making her European debut for the Blues, teed up Kirby for the first goal, and scored Chelsea’s fourth of the day in Portugal, heading home a Guro Reiten cross just before Swiss ref Esther Staubli blew for half-time.

Reiten also had a very good game, being the provider of two of Chelsea’s goals.

Kirby finally overtook Eni Aluko’s Chelsea goal-scoring record and becomes the Chelsea Women top scorer with her 69th and 70th goals in the space of just just half an hour. Between those strikes, Millie Bright headed home Chelsea’s third, from another Reiten through ball.

It came from a free kick, awarded for a nasty tackle by Benfica’s Nigerian midfielder Christy Ucheibe, which also saw a yellow card being flashed.

So, 4-0 at the break thanks to Kirby, Bright, Kirby and Harder, with the second half featuring the 54th minute strike by England – her first Champions League goal, and an elegant hoof over the Portuguese keeper – to cap the fine overall performance.

With Sam Kerr still recovering from the hip injury that had seen her limp off at Kingsmeadow against West Ham, having scored a hat-trick on Sunday, and Mel Leupolz and Maria Thorisdottir also rested, it gave Bright, Sophie Ingle and Reiten a chance to show their class.

Magda Eriksson, wearing the captain’s armband, notched up her 100th appearance, while Jess Carter got a deserved run-out in the second half – reward for her hard work in building fitness over the last few months. She is now one of Chelsea’s most versatile utility players, able to cope on the wing, in defence and in midfield. But while she’s a useful addition to Emma Hayes’ subs bench, she yearns for more regular starts in matches.

Erin Cuthbert was one of four subs made together just before the hour mark, as Jessie Fleming, Maria Thorisdottir and Naimh Charles also came on, but within 15 minutes Cuthbert’s foot was stamped on by the already-booked Ucheibe. Another yellow (which could, frankly, have been a straight red for violent conduct), and she was taking an early shower.

Cuthbert herself – clearly angry at the incident – was herself booked two minutes later for a tackle from behind which summed up her frustration.

Ann-Katrin Berger, largely unused in the Blues’ goal, finally had a save to make two minutes from time, but the scoreline remained 5-0 to Chelsea ahead of next week’s second leg. Meanwhile there’s the trip to Brighton in the WSL to navigate on Sunday afternoon.