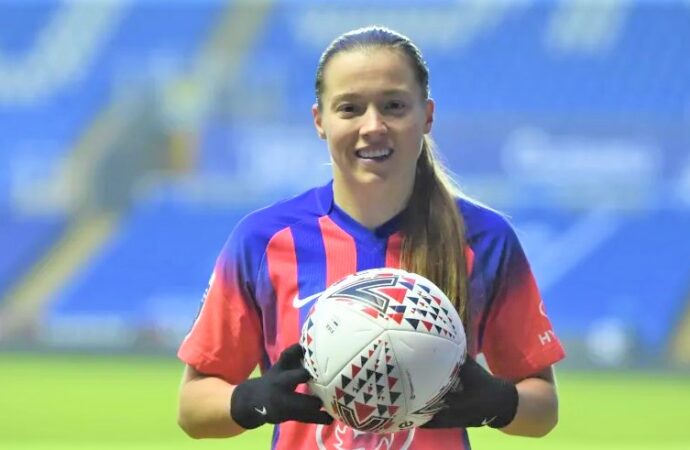 Chelsea Women can go top when – Covid permitting – they host Manchester United at Kingsmeadow on Sunday. It follows a majestic Madejski show against Reading, with Fran Kirby scoring four of the Blues’ five goals without reply, leaving the champions second in the table. “While Fran scored four goals, and four brilliant goals, it

Chelsea Women can go top when – Covid permitting – they host Manchester United at Kingsmeadow on Sunday.

It follows a majestic Madejski show against Reading, with Fran Kirby scoring four of the Blues’ five goals without reply, leaving the champions second in the table.

“While Fran scored four goals, and four brilliant goals, it was a total team performance,” said Emma Hayes… although she knows her treasured No14 would be the last person in the squad to get big-headed.

Modesty could be Kirby’s middle name, and this scoring surge (incorporating a perfect left foot/right foot/header hat-trick) is just reward for the months of work in regaining her strength and pace after a long lay-off for a heart virus. She beamed with delight when (pictured) she was given the match ball.

Sam Kerr selflessly set up three of Kirby’s four goals, and the pair made beelines for each other to celebrate every time. It now means Kirby has overtaken Kerr as current top scorer.

How one of the smallest players in the WSL could have twice beaten Reading keeper Grace Moloney, and the Royals’ defence, with headers is little short of extraordinary.

Interestingly, when Eriksson came on as sub in the second half, Ingle remained in her anchor role, and Eriksson operated on the left flank in place of Jonna Andersson… although the club captain made a point of relieving Bright of the captain’s armband!

Hayes said that the squad was back in shape after weathering the alarm of the pre-Christmas Covid outbreak at Cobham. The virus has, however, forced the postponement of the planned Conti Cup clash with Man City, which will now be moved to one of the women’s blank weekends.

Looking ahead to Sunday, Hayes said: “I do not underestimate Man United; they are top of the league for a reason.

“They have been unbelievable all year, so we’re going to have to be at our very best if we’re going to beat them. But we’ve got all the qualities in our squad to do that.”

Remarkably, the women’s 5-0 result eclipsed Chelsea men’s 4-0 win over Morecambe in the FA Cup 3rd round as Frank Lampard’s men now limber up for the Fulham Road derby this weekend.

Chelsea visit the Cottage on Saturday, a game refixed twice because of TV and Covid.

Frank Lampard desperately needed that victory against the Shrimps, knowing that the patience of the boardroom was under strain.

“We’ve had some results we don’t like recently,” said the gaffer after Sunday’s cup tie, where he singled out young midfielder Billy Gilmour for praise.

Gilmour’s calmness on the ball is remarkable. He’s one of the most alert players in the squad, mapping out opponents’ movements in his head before making decisions.

We’re in transfer window territory now, so expect a few of Lampard’s ‘spares’ to disappear on loan.