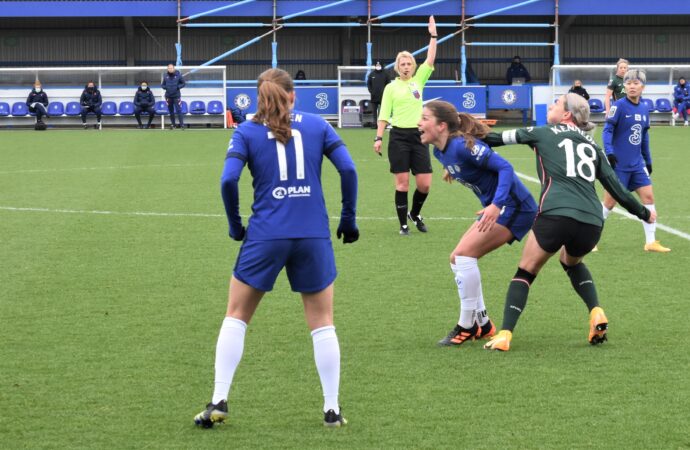 Chelsea cemented their place at the top of the Women’s Super League with a 4-0 victory against Spurs at a bitterly cold Kingsmeadow on Sunday. Yet for the first 20 minutes of this engrossing match, it was Tottenham who dominated, pinning the Blues back in their half as they kept possession and carving out a

Chelsea cemented their place at the top of the Women’s Super League with a 4-0 victory against Spurs at a bitterly cold Kingsmeadow on Sunday.

Yet for the first 20 minutes of this engrossing match, it was Tottenham who dominated, pinning the Blues back in their half as they kept possession and carving out a string of good chances to open the scoring.

When Chelsea did finally get a grip of the game, after weathering the initial storm, they scored two goals in two minutes to knock back the visitors and provide a platform for what was, ultimately, another comfortable win.

Blues manager Emma Hayes admitted that the early phase of the game had been out of character for her team. “I think, until the first goal, we were sloppy,” she said. “We played into their hands with our decision making and composure.

“Credit the opponents. If you don’t start with a good intensity and tempo, you can get into bad habits. There are a lot of games, and the challenge for us is going to be the most difficult because of the volume of games.

“There’s an expectation on this team to win all the time and perform amazingly, but we’re human and maybe sometimes we’re not at our best. I don’t think it hurt us, but it reminds us of the things we need to do to be at our best.”

Mel Leupolz had an impressive game in midfield, scoring the opening goal in the 27th minute with a 25-yard thunderbolt, then adding another in the second half from the spot. The German, pictured above tussling for the ball with Spurs captain Alanna Kennedy, was in excellent form, tackling firmly and accurately and dominating the centre of the pitch.

“Melanie Leupolz has been an unbelievable signing for us this season,” said Hayes. “She brings an energy, a tenacity but also the composure, the calmness, the leadership that adds to what we already have.”

The match was effectively put to bed before the half-hour mark after Fran Kirby pulled the ball back from the bye line, and Pernille Harder’s looping lob flew over the head of Tottenham’s debutante keeper Aurora Mikalsen. 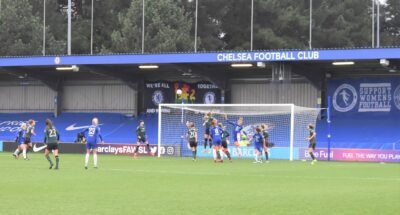 Chelsea resumed their customary possession game, and it was no surprise when Sam Kerr added a third before the break with a firm downward header after Harder had crossed.

With Hannah Blundell taking the place of Maren Mjelde on the right in the second half, Hayes was able to make a further series of substitutions to rest players ahead of Wednesday’s Conti Cup game against West Ham.

Sam Kerr and Fran Kirby made way for Beth England and Jessie Fleming, and Pernille Harder and Millie Bright were replaced by Drew Spence and Sophie Ingle.

The clinching goal came in the 63rd minute. The ball struck the Spurs captain on the arm from close range in the box, and ref Sarah Garratt (slightly harshly) pointed to the spot. Leupolz stepped up for her second and Chelsea’s fourth, to cap a fine overall performance.

And yet at the end there was a slight feeling of relief in the Chelsea camp. This win looks comfortable if you just focus on the scoreline, but had Tottenham had a little more luck and made more of their early chances, this could have been a different outcome. It was, said Hayes, a timely reminder that nothing can be taken for granted.

Shelina Zadorsky came close to scoring as Spurs pressed in the 13th minute, and Ria Percival – wearing a white protective facemask like the Lone Ranger – struck the post a minute later with an excellent effort from range.

In fact it was only after Ann-Katrin Berger, in the Chelsea goal, had to make a flying save from Kit Graham in the 19th minute that the Blues eventually got a grip on a match which was threatening to run away from them. 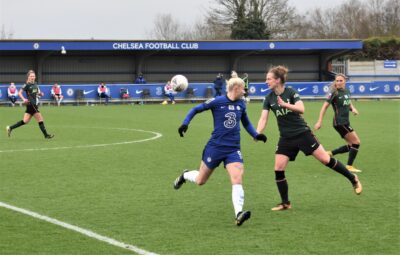 Spurs manager Rehanne Skinner said she was able to take a lot of positives from the game, despite the final score, adding that she had been particularly impressed with her side’s early pressing and chance creation.

“Nobody wants to lose 4-0, but the first 20 minutes in terms of possession was really positive for us. We probably had a little bit more time and space to do better with the chances that we had,” she said.

“We defended really well from set plays, and for the first 20 minutes we were able to put a lot of pressure on the ball to create chances. From a confidence perspective, had we made more of those early chances it could have changed the landscape of the game.”

Emma Hayes confirmed that Erin Cuthbert (watching from the stand, and wrapped up like an Egyptian mummy against the tumbling temperature) should be in contention for Wednesday night’s game at Kingsmeadow, after tweaking her hamstring.

“She’ll be back. She just had a little bit of trouble in her hamstring and will just take another couple of days, then she’ll be back in the team,” said the gaffer.