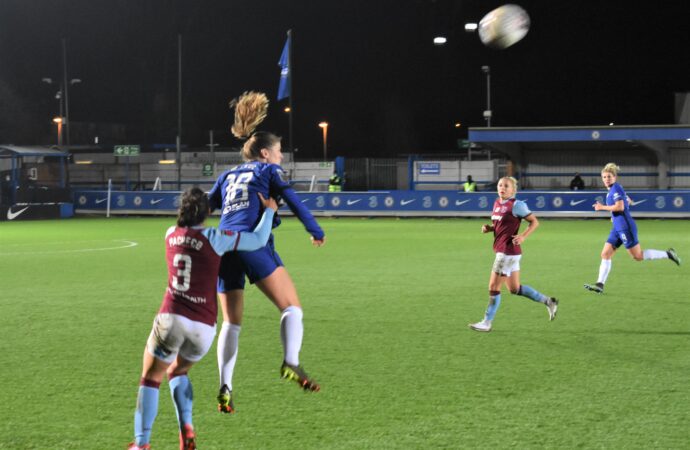 The previous time Chelsea and West Ham met, three weeks before Christmas at Kingsmeadow, Sam Kerr scored a hat-trick. On Wednesday night the teams met again, and this time Pernille Harder left with the match ball, netting half the goals in a 6-0 whitewash. In a compelling Conti Cup semi-final, Chelsea Women triumphed… yet the

The previous time Chelsea and West Ham met, three weeks before Christmas at Kingsmeadow, Sam Kerr scored a hat-trick. On Wednesday night the teams met again, and this time Pernille Harder left with the match ball, netting half the goals in a 6-0 whitewash.

In a compelling Conti Cup semi-final, Chelsea Women triumphed… yet the scoreline didn’t accurately represent the ebb and flow of the football, especially in the tightly matched second half.

West Ham’s new manager Olli Harder, a former keeper himself, had sympathy for the Irons’ Aussie netminder Mackenzie Arnold, and said that he took a lot of heart from his team’s improved overall performance after the break.

And so he should. The Hammers never gave up, and deserved to get one, perhaps two, goals in reply for their sheer dogged persistence. The important thing for the manager was, his team never gave up.

But by half-time it was 4-0, and the situation was impossible to retrieve. 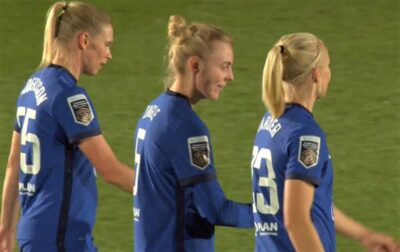 Unlike their mysteriously slow start against Spurs at the weekend in the WSL, Chelsea started this 5pm kick-off game at Kingsmeadow at the gallop. In the fourth minute, Ji So-Yun slid the ball to Pernille Harder, who effortlessly lobbed Arnold. Being critical, the keeper was guilty of hesitation coming off her line.

West Ham steadied the ship, but on the quarter hour mark Sophie Ingle let fly a 30-yard punt (she just doesn’t do ordinary goals) which bounced awkwardly in front of Arnold and flew in.

Ten minutes later it wa 3-0. This time Arnold was to blame, fairly and squarely. Under little pressure she attempted a clearance, but miskicked the ball, which trickled a yard or two forward. Harder pounced, drew the ball away, then spun round and fired home. It was simply too easy.

It could barely get worse for West Ham, but two minutes later it was 4-0. This time Chelsea broke down the right with Fran Kirby set in motion by Ingle. The diminutive striker put on the afterburners and raced to the byeline to deliver an exquisite cross that Beth England deflected in. 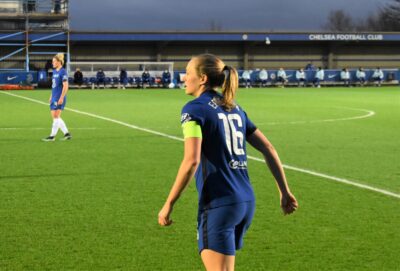 Olli Harder’s half-time team talk must have been dazzling, because West Ham really dug in during the second period and could have clawed at least one goal back. They were industrious in midfield, felt bold enough to attack with a freedom they hadn’t shown in the first half and hassled Chelsea off the ball at every opportunity. It looked like – unlikely as it seems – there was a chance of if not turning the table then at least swivelling it slightly.

Instead, Chelsea struck twice more. After 70 minutes, some neat passing between right back Maren Mjelde and sub Jessie Fleming set up a chance for Kirby. West Ham defenders tried to clear, but the ball bounced off the crossbar and down, where Kirby buried it in the roof of the net at the second attempt for 5-0.

The final goal, securing the light-footed Danish forward’s hat-trick and giving the Blues their 6-0 margin, was with barely four minutes remaining. Harder took a shot from the edge of the area, and it evaded Arnold. 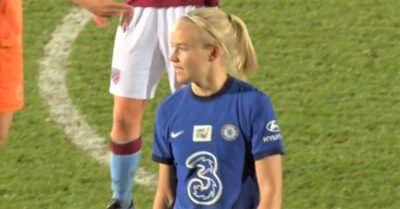 “In City and Chelsea we’ve just faced two of the best teams in the world,” said Olli Harder ruefully. “But in what I’ve seen in six weeks I’ve been really pleased. We lost by six, but anyone watching will have appreciated the energy and intensity we showed in the second half.

“Scoring a goal wouldn’t have had a bearing on the result, but it would have been a nice lift. It would have been easy to let heads go down, but I’m proud of the fact that we continued to represent ourselves positively.”

Hayes made so many second-half changes it was briefly difficult to keep up. Hannah Blundell, Fleming, Erin Cuthbert, Guro Reiten and Drew Spence all came on. Indeed in the 83rd minute we were faced with the prospect of a sixth, concussion substitution after England clashed heads with Laura Vetterlein and every trainer rushed to their prone bodies. But both recovered enough to see the match out.

Chelsea Women’s ruthlessness delighted manager Emma Hayes, who now selects a Sunday team for the third of four successive home matches on the spin – the WSL clash with Brighton at 2pm.

Naturally, she was most impressed by her hat-trick scoring Dane. “I’ve been conscious of the drop-off from our team in our regains and counter-presses. It’s an area Pernille has had to work at,” said Hayes, who likes to temper praise with a slice of constructive realism. 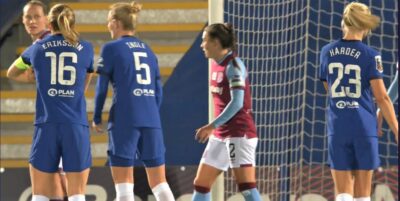 “Tonight I saw what I was looking for from her, with her aggression. Her workrate is second to none, but she’s starting to build the relationships within the team which is always going to take time. I thought she had a good game at the weekend [against Tottenham] but tonight was her best game in a Chelsea shirt.

“I’m really pleased; getting to finals is no easy achievement, and the preparation of the team to keep finding new levels is a real testament to the work that’s put in, day in day out.

“They’re hungry. Everybody’s hungry for trophies and we know it’s ours to lose as we’re holders. We’re looking forward to being back in another final.

Emma, who has never been to Watford’s Vicarage Road as a coach, will be doubly proud to walk out with her team on Mothering Sunday, March 14, to face Bristol City, partly because of her admiration for legendary Hornets’ manager Graham Taylor. “He built that club to last,” she said, in a clear rebuke to persistent rumour-mongers who keep linking her with the managership of AFC Wimbledon.

“I’ve never spoken to Wimbledon; I’ve never been offered a job at Wimbledon,” she stressed. “It is not a step down to coach Chelsea Women; it’s an insult to suggest otherwise. I’m in the best job in the world!”