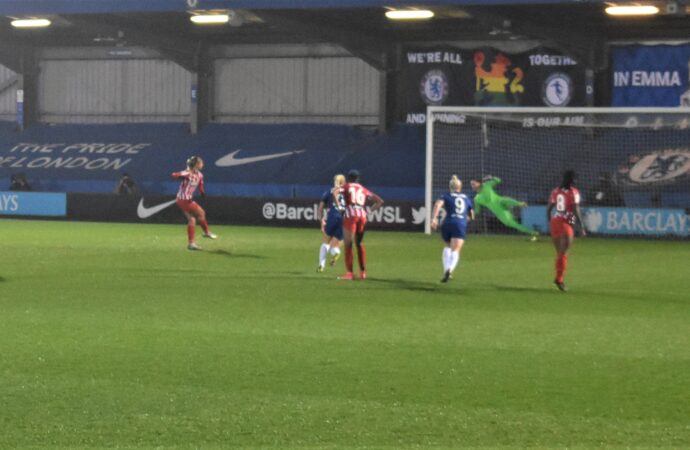 In an extraordinary night of European drama at Kingsmeadow, Chelsea Women were reduced to 10 players within the first quarter of an hour, and conceded two penalties… yet emerged 2-0 victors against Atletico Madrid in the Champions League Round of 16. With the away leg of this double header to come on neutral turf in

In an extraordinary night of European drama at Kingsmeadow, Chelsea Women were reduced to 10 players within the first quarter of an hour, and conceded two penalties… yet emerged 2-0 victors against Atletico Madrid in the Champions League Round of 16.

With the away leg of this double header to come on neutral turf in Monza, Italy, next week, the Blues are favourites to progress to the quarter-finals of the competition they most dearly want to win after a display of resilience and team togetherness that delighted manager Emma Hayes, but left her counterpart all at sea. 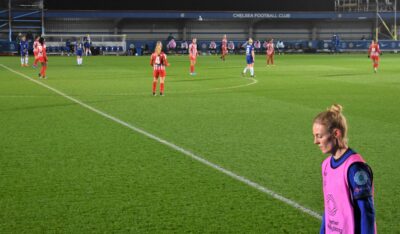 Sophie Ingle was correctly shown a red card after tangling with, and tripping, the lightning-fast blue-haired Rasheedat Ajibade, sprinting through on goal after 12 minutes.

It all looked rather bleak for a Chelsea side that were without their injured captain Magda Eriksson, watching in the stand alongside fellow patient Carly Telford.

Ingle, right, had to make the long walk, head bowed, round three sides of the pitch to the dressing room, knowing that her actions – inadvertent or otherwise – had jeopardised the Blues’ chances of advancing to the last eight in Europe.

Eriksson (pictured below in her cream-coloured woolly hat) immediately left her seat in the stand to go to the dressing room after her, to console her, knowing that Ingle had been placed in the left central defensive position that the captain usually occupies. 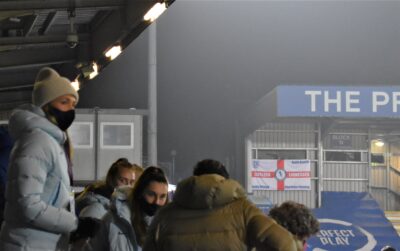 But Ann-Katrin Berger, playing in goal at one end opposite Hedvig Lindahl – the goalie she replaced at Chelsea – at the other, refused to be beaten from the spot. As Deyna Castellanos, playing in a false No9 position for Atletico, stepped forward to take the pen in the 14th minute, Berger dived to the right (see top picture) and clawed the shot wide.

Despite Atletico’s speedy breaks and attempts to charge through a defensive line reduced to three (Maren Mjelde, Millie Bright and Jonna Andersson), with additional support when needed from sub Naimh Charles (brought on as forward Beth England was sacrificed) and Mel Leupolz, Chelsea contained the counters and were relieved to still have the score at 0-0 at half-time.

Then, in the second half, the Blues played as if it was still 11 v 11, putting on a serious display of unity and purpose which resulted in Sam Kerr being felled in the Atletico area, and Chelsea winning a penalty of their own after 57 minutes. 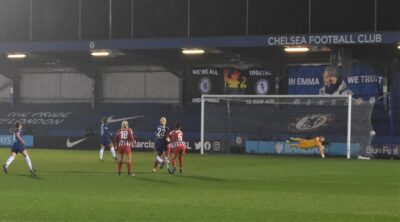 It was Mjelde against Lindahl; two players who know each other well and, presumably, have a shrewd idea of each other’s capabilities. Mjelde won, beating her former teammate who flew through the air (right) but was unable to stop the ball bulging the back of the net to make it an unlikely 1-0 to Chelsea.

On the hour mark, Kerr broke through, but sent her shot wild and wide. Four minutes later, Fran Kirby was also through, firing a shot against the post. It rebounded, reached Kerr, and the Australian returned the ball to Kirby, who fired home just past Lindahl’s fingertips for 2-0.

With 78 minutes on the clock, and Kirby replaced by Guro Reiten, Berger was in the wars. The trainers had already been on once to treat a knock, and were back on the pitch again to give further treatment after Berger clattered Ludmila and Atletico won their second penalty of the game, awarded by Swedish referee Tess Olofsson.

Berger recovered and steadied herself to face the spot kick – this time taken by Merel van Dongen. Once again, Chelsea’s German keeper triumphed, this time (left) diving the opposite way to send the penalty kick wide. But in the melee that followed, she took an accidental knock in the face from Andersson. With an ambulance crew called to bring on a stretcher, Berger was once again patched up and – like some kind of goalkeeping robot – soldiered on for the last 10 minutes, and the six extra minutes at the end, largely caused by her injuries!

“Goalkeepers don’t get praised enough,” said Hayes in the post-match press conference. And while the manager was loathe to single out any individual for praise after a heroic all-round team effort with a player short, she finally relented. “All right,” said Hayes. “Let’s give her the credit tonight. Ann-Katrin is held in the highest regard in the dressing room by other members of the team.” Hayes also revealed that she had spent a year wooing Berger and persuading her to move to England.

After the match, Atletico Madrid manager Jose Luis Sanchez Vera, pictured, was understandably terse, even slightly tetchy, when questioned about his tactics, and why his side had failed to make more of a player advantage, and the award of two penalties. 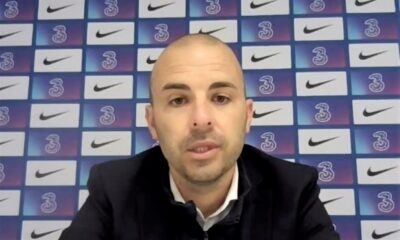 “We made two mistakes and missed two penalties, but we showed the game plan we wanted to show and the result is 2-0,” he said. “We went for a double pivot system; we wanted to dominate possession, but football comes down to what happens in the two boxes. Chelsea took their chances; we didn’t.”

Hayes said that it all boiled down to discipline, structure and game management. She felt the ref got all the big decisions right, but quibbled about consistency. Ji, for instance, got a yellow card for a supposed studs-up tackle, while one of the Spanish players had not been carded for a similar incident. And Kerr was booked for kicking a ball away, while an Atletico player wasn’t for something that looked identical.

Nevertheless, Chelsea go into Sunday’s league game at West Ham with a spring in their step, and can look forward to facing Atletico in the second leg with every chance of getting into the last eight of the Champions League.

Magda Eriksson should be available for one, or both, matches. “She’s not far away,” said Hayes. “There’s a chance for the weekend, if not, then next week.”