It’s all down to Mum, says Maren 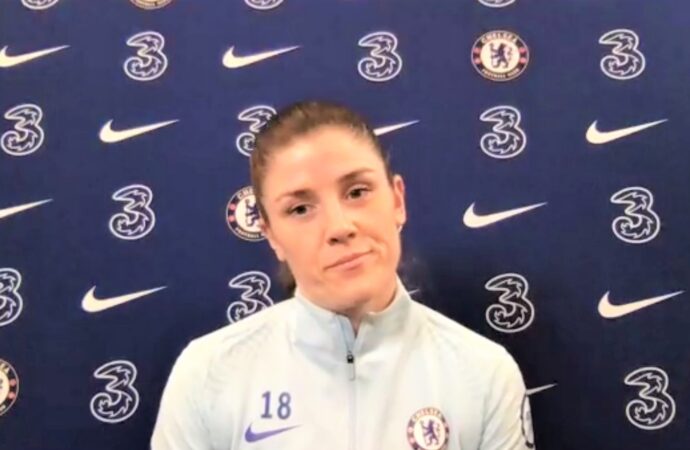 As Mothering Sunday approaches, Chelsea’s versatile defender and corner kick specialist Maren Mjelde says the person with the biggest influence on her life is Mum. The Blues, in away action in midweek in the second leg of their Champions League duel with Atletico Madrid, will face Bristol City on Sunday March 14 – the day

As Mothering Sunday approaches, Chelsea’s versatile defender and corner kick specialist Maren Mjelde says the person with the biggest influence on her life is Mum.

The Blues, in away action in midweek in the second leg of their Champions League duel with Atletico Madrid, will face Bristol City on Sunday March 14 – the day mothers everywhere are traditionally receiving flowers and chocs.

Chelsea are in the Conti Cup final at Watford’s Vicarage Road ground… with the 31-year-old Norwegian saying that her mum is still her main sounding board and support net.

“I have female role models I look up to, but especially my mum,” said Mjelde. “She’s my biggest inspiration, and I’m probably going to go home and have a good talk with my mum,” she said.

Asked what advice her mother gave her before matches, she admitted that she still got more football advice from her dad than her mum! “But my mum has always been there for me, supporting me. She loves football as well, and she’ll always be there for me, whatever I’m doing.

“She has the biggest heart, and I want to be like her when I get older. She’s been through difficult times; she was ill some time ago, and she came through that really well. Just seeing how strong she is gives me a lot of inspiration.

“Sometimes you have to step back [from football] and take time to talk to family and friends on facetime; that’s my way… finding out what the family’s doing.” 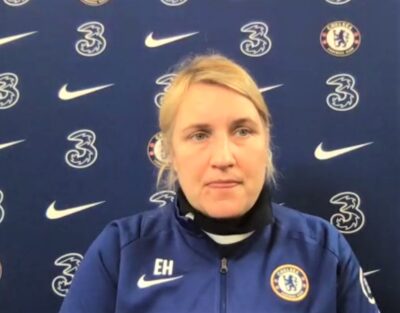 Mjelde said it was also inspiring and important to have manager Emma Hayes as an inspiration and role model. “It’s good to have someone like her in the club.”

Hayes herself reflected on the fact that the pre-match press conference for the Champions League fell on International Women’s Day.

“I didn’t grow up with International Women’s Day being an important day for me,” she said. “It’s become more prominent in the last few years; it’s important to reflect on the wonderful achievements of women throughout history, not just within our sport.”

She said she looked forward to a day when gender made no difference, and that, effectively, every day was an international women’s day.

With club captain Magda Eriksson ruled out of the second leg of the Round of 16 Champions League clash with Atletico Madrid through (unspecified) injury, and Sophie Ingle suspended after being sent off early in the first leg, Hayes will turn to Mjelde to pair with Millie Bright in central defence to preserve the Blues’ 2-0 first-leg lead.

“I know people don’t think we have enough centrebacks,” laughed Hayes. “But Maren Mjelde is the starting centreback for Norway, and has spent a large part of her career there. She’s played many positions for us.

“I don’t think people realise how good Maren Mjelde is. You show me any player who can play centre midfield, right back, centre back… even up front; her versatility is her strength.

“With her leadership, her tactical application and determination, she’s one of the most underrated players in the world.” 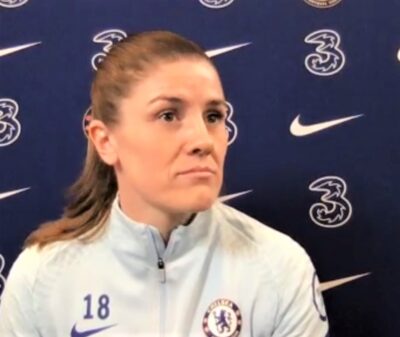 Hayes said that she’d learnt more about her team after they were reduced to 10 players following the red card for Ingle than if everything had gone swimmingly.

“I learnt that the team can adapt to really difficult situations,” said Hayes. “If you don’t have setbacks you don’t get to learn that; you won’t get to see what your Plan B or C is.”

So what does Maren Mjelde herself make of the endorsement of her mastery of multiple positions?

“I’ve never had one position,” she said. “I’ve always played where the team needs me to be and where the manager wants me to be. I’ve got a family that loves watching football, so I get good feedback from them too.

“I am older now, and more experienced. I’ve played right back, centre back, centre mid, everywhere in the midfield, I’ve played as a 10, and as a winger, so it probably just leaves striker and goalkeeper!”