Flung into the fray in the first leg of Chelsea’s Champions League duel with Atletico Madrid, and part of the starting line-up in the second, Blues midfielder Naimh Charles was the stand-out performer as the team from Kingsmeadow enter the quarter-final draw. The Blues were looking leggy and drained by the end of Wednesday lunchtime’s

Flung into the fray in the first leg of Chelsea’s Champions League duel with Atletico Madrid, and part of the starting line-up in the second, Blues midfielder Naimh Charles was the stand-out performer as the team from Kingsmeadow enter the quarter-final draw.

The Blues were looking leggy and drained by the end of Wednesday lunchtime’s clash on neutral ground in Monza, Italy, but a 1-1 scoreline (3-1 on aggregate) was enough to carry them through to Friday’s draw, when quarter and semi-final teams will be selected.

While Chelsea worked miracles in the first leg at home, where – despite being reduced to 10 players after the early sending-off of Sophie Ingle – they eked out a remarkable 2-0 win, the boot was on the other foot in the second leg, as Atletico dominated play, chances and possession.

But Lady Luck was on the Blues’ side, and French ref Stephanie Frappart didn’t see Atletico’s shouts for penalties in quite as clear cut a way as the Spanish players did.

With that crucial two-goal advantage from the first leg, where Atletico missed two penalties, Chelsea approached the match in Italy positively, but soon discovered that Atletico were not going to make the errors that they’d done before.

Madrid dominated the opening exchanges, and bossed the first half. When Beth England was forced to go off with what seemed to be suspected concussion, and Guro Reiten came on after 42 minutes, it looked like it might be a long final 45 minutes.

But strong penalty appeals from Atletico after 53 minutes, when the ball struck Reiten’s arm in the penalty area, and when Ludila was bundled over by Charles, were waved away.

Finally, after 74 minutes, Atletico were awarded a spot kick when the ball was wellyed at Charles, and struck her arms as she jumped and turned away. Up stepped Toni Duggan, but her kick bounced away harmlessly off the bar, with Ann-Katrin Berger committed to a dive (pictured, above).

Three penalties over two legs, and nothing to show for it. Manager Jose Luis Sanchez Vera will be working on that on the training ground ahead of the weekend’s Madrid derby in the league. 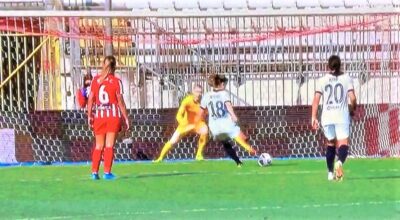 Then, much like in the first leg, the Blues were awarded a spot kick of their own three minutes later; harshly given after screaming appeals by Reiten swayed the blindsided ref when the ball actually struck the side of bemused debutante Sonia Garcia, who just stood dumbfounded rather than disputing the decision.

It was harsh on her, but without VAR there was no way the officials could see any replays. Maren Mjelde (pictured) beat her old teammate Hedvig Lindahl, and Chelsea could relax.

And they did… so much so that in stoppage time sub Emelyne Laurent curled a beautiful goal past the rooted Berger for 1-1.

Charles put in a full shift against Atletico, rewarding the faith that manager Emma Hayes has shown in her.

Hayes rates the former Liverpool player highly. The Blues gaffer pursued her after being impressed by her performance when playing against Chelsea last season.

She has strong upper body strength (her throw-ins are the best in the team) and is gaining in confidence and speed with every appearance.

Next up, Chelsea will be resting weary legs and regrouping to ensure they bring as much energy as possible to Vicarage Road on Sunday, and the clash with Bristol City in the final of the Continental Cup, when captain Magda Eriksson – on the bench at Monza – hopes to make a return after a week-long lay-off.