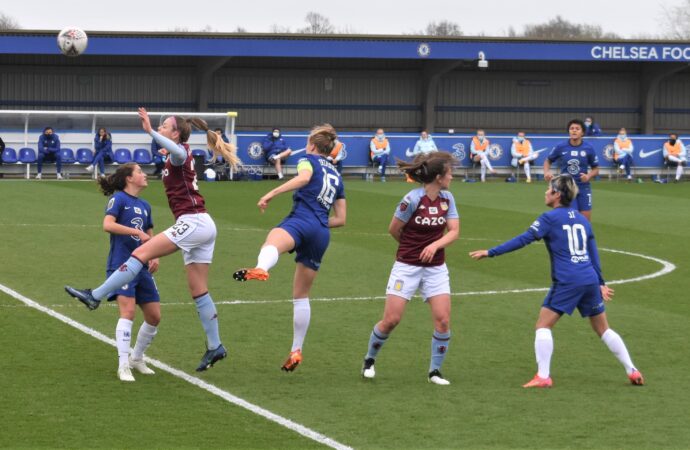 Chelsea eased past Aston Villa in the Women’s Super League on Sunday with a much-changed team as Emma Hayes kept half an eye on the looming second leg of the Champions League. It was a chance for squad players to shine, with Hannah Blundell and Jess Carter in the starting line-up among the six alterations

Chelsea eased past Aston Villa in the Women’s Super League on Sunday with a much-changed team as Emma Hayes kept half an eye on the looming second leg of the Champions League.
It was a chance for squad players to shine, with Hannah Blundell and Jess Carter in the starting line-up among the six alterations from the team that had beaten Wolfsburg in Budapest.
But it was Naimh Charles and Ji So-Yun who truly shone on a chilly Kingsmeadow afternoon, giving good midfield support to the familiar ‘Special K’ front pairing of Fran Kirby and Sam Kerr.
Although Villa  held firm for the first quarter of the game, Kirby supplied Kerr with the opener after 24 minutes; the Australian’s looping header evading a disappointed Lisa Weiss in the Villa goal.
Villa manager Marcus Bignot took some positives from his players’ endeavour, saying: “Our objective was to stay in the game as long as possible. We frustrated Chelsea and grew in confidence all the game.”
It was partly the defensive skills of returning ex-Blue Anita Asante that kept the chances, and scoreline, down for Chelsea, but a second goal on 57 minutes (with Kirby again supplying Kerr) clinched the result and triggered a rash of substitutions as the home side saw the game out.
Kirby squared the ball to Kerr, who diverted it firmly, high and hard into the roof of the net.
With 17 minutes remaining, Guro Reiten (who had sustained a knee knock in a blue-on-blue collision) gave way to Aggie Beever-Jones, who became the lone up-front striker as the formation was shuffled. 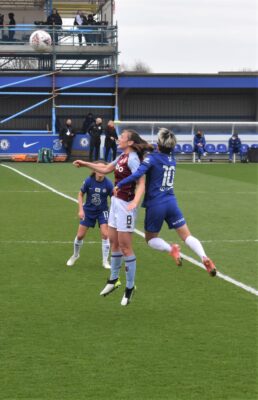 It was a rare chance for the youngster, who was cheered on by the squad players from the stand… among them Beth England, who has now been cleared by the neurologist to play on Wednesday after fully recovering from concussion.
“I was disappointed with some of our standards,” said a critical Emma Hayes afterwards, mindful that any lapses against Wolfsburg will be punished severely. She had hoped to see more passion from her players, but everyone looked slightly distracted from being in the middle of the Champions League adventure.
“Villa made it difficult for us,” she added. “I was disappointed with the group as a whole, but we’ll have to improve if we’re going to progress on Wednesday. It takes a lot to make me happy.”
Before Hayes chooses her line-up for the second leg of that game – technically the ‘away’ leg, although both are played in the same Hungarian stadium – she will watch Sunday afternoon’s match again in full. “I like to watch the game back, and not make quick decisions,” she said. “I don’t pick starting 11s, I pick the right team.”
Of her free-scoring front pairing she added: “Both Fran and Sam are playing with a smile on their face; they’re telepathic and they bring the best out of each other.”