Carter’s the star in Europe 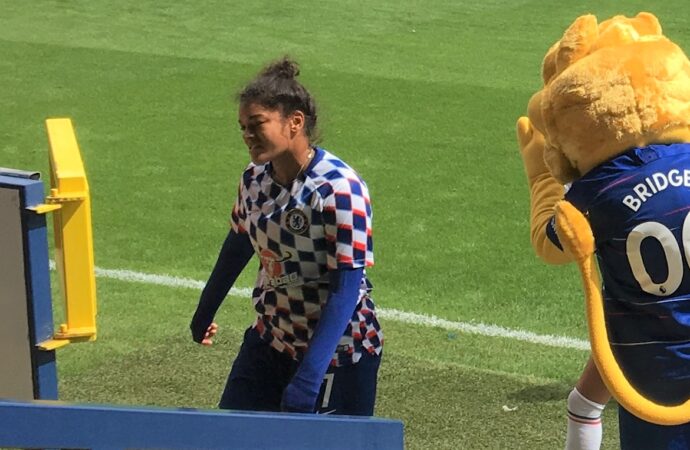 Chelsea cruised through to the semi-final stage of the Women’s Champions League, beating their nemesis Wolfsburg 3-0 (5-1 on aggregate) in a one-sided game which sums up their current confidence and belief, with Jess Carter – making only her third start of the season – the stand-out star. The Blues controlled the second leg of

Chelsea cruised through to the semi-final stage of the Women’s Champions League, beating their nemesis Wolfsburg 3-0 (5-1 on aggregate) in a one-sided game which sums up their current confidence and belief, with Jess Carter – making only her third start of the season – the stand-out star.

The Blues controlled the second leg of the quarter-final in Budapest on Wednesday to easily brush aside their former tormentors; the German league title holders who have knocked Chelsea out of the tournament on three previous occasions.

“I’m such a proud captain today; what a performance from the girls,” said Magda Eriksson afterwards.

Erin Cuthbert added: “What a game, what a win, we’ve just beat Wolfsburg and we’re through to the semis!”

Unlike the first leg, that Chelsea won 2-1, against the run of play, the Blues bossed the match from the moment Russian ref Anastasia Pustovoitova put whistle to lips.

It was 1-0 after 27 minutes, when Sam Kerr was bundled over on the edge of the box (no VAR means it’s the officials’ say-so) by Sara Doorsen-Khajeh. Pernille Harder, on spot kick duties with Maren Mjelde ruled out through injury until August, sent her old team-mate Katarzyna Kiedrzynek the wrong way.

The keeper had tried to needle Harder before the kick – standing just feet away from her until she was shooed away by the ref. So unlike Harder’s restrained and respectful muted celebration last week after scoring, she showed more passion this time around.

At the other end, Ewa Pajor squandered Wolfsburg’s best opening of the match two minutes later, flailing at a cross with an open goal in front of her… and missing the target by slicing the ball wide.

It was 2-0 to the Blues after 32 minutes after Sam Kerr, fed by a delightful through ball from Sophie Ingle, turned in the box, took two small touches to wrong-foot her pursuers and fired home for her 20th goal of the season.

With nine minutes of normal time remaining, Fran Kirby netted the third after sub Ji So-Yun set up the shot and the striker nutmegged Kiedrzynek.

Again, the Special K partnership of Kerr and Kirby had come up trumps (39 goals between them this campaign), Ann-Katrin Berger kept her 15th clean sheet in 22 appearances for Chelsea this season, and now the Blues will likely face Bayern in the two-legged semi-final.

Yet the player of the match wasn’t a striker at all, it was Carter, in as stand-in right back, and dominating the wing. She has also been demonstrating her skills as a long-thrower, sending several flings right into the Wolfsburg box, and was the player who most earned manager Emma Hayes’ beams at the end.

This was, arguably, Chelsea’s finest European performance of all time. Next up for Chelsea Women, a home league game against Birmingham at the weekend.